Fewer Americans filed new claims for unemployment benefits last week amid falling COVID-19 infections, but the near-term outlook for the labour market is unclear after winter storms wreaked havoc in the South region in the middle of this month.

Still, the decline in claims to a three-month low reported by the U.S. Labor Department on Thursday suggested the labour market was slowly regaining traction, catching up with the broader economy, after hitting a pothole in late 2020. Other data showed a solid increase in demand for U.S.-manufactured goods in January.

The reports followed on the heels of news last week that retail sales increased by the most in seven months in January.

The brightening economic picture reflects nearly US$900-billion in additional pandemic relief provided by the U.S. government in late December and the reopening of many services businesses as the winter coronavirus wave recedes. It was unlikely to derail President Joe Biden’s massive US$1.9-trillion recovery plan under consideration in the U.S. Congress.

“The data underscore the big boost to growth already evident from last December’s stimulus,” said Chris Low, chief economist at FHN Financial in New York. “Momentum on the next stimulus bill may be too powerful to stop ... Some of the spending is needed despite the economy’s strength.”

Initial claims for state unemployment benefits fell 111,000 to a seasonally adjusted 730,000 for the week ended Feb. 20, the lowest level since November. Economists polled by Reuters had forecast 838,000 applications in the latest week.

Unadjusted claims decreased 131,734 to 710,313 last week. There was a sharp decline in filings in Ohio, which had been plagued by fraudulent applications. Claims also fell in California.

Including a government-funded program for the self-employed, gig workers and others who do not qualify for the regular state programs, 1.2 million people filed claims last week.

Though claims have dropped from a record 6.867 million last March when the pandemic hit U.S. shores, they remain above their 665,000 peak during the 2007-09 Great Recession, underscoring the damage caused by the virus.

In the coming week, claims could be boosted by the stormy weather in the densely populated South, which left large parts of Texas in the dark and without water for days. Unadjusted claims for Texas fell last week, likely as power outages prevented the filing and processing of applications.

“We would not be surprised to see a rise in claims next week as a result of the weather-related backup, but expect claims to begin trending lower more definitively over the course of March,” said Sarah House, a senior economist at Wells Fargo Securities in Charlotte, N.C.

Stocks on Wall Street were trading lower. The dollar fell against a basket of currencies. U.S. Treasury yields rose.

The economy has recovered 12.3 million of the 22.2 million jobs lost during the pandemic. Employment is not expected to return to its prepandemic level before 2024. Millions of Americans are experiencing long spells of joblessness.

The number of people receiving benefits after an initial week of aid dropped 101,000 to 4.419 million during the week ended Feb. 13. But that was mainly due to people exhausting their eligibility for benefits, limited to 26 weeks in most states.

At least 5.066 million people were on extended benefits during the week ended Feb. 6, an increase of 1.0 million from the prior period. These benefits, which are funded by the government, will expire in mid-March if Congress does not pass the Biden administration’s relief package.

About 19.043 million people were on unemployment benefits under all programs in early February. But there is reason to be cautiously optimistic about the labour market.

Daily coronavirus cases and hospitalizations have dropped to levels last seen before the Thanksgiving and Christmas holidays, while the pace of vaccination is picking up.

The improving public-health situation helped to boost retail sales in January. Household perceptions of the labour market also improved in February, setting the wheels in motion for stronger economic growth this quarter.

A separate report on Thursday from the Commerce Department showed orders for non-defense capital goods excluding aircraft, a closely watched proxy for business spending plans, rose 0.5 per cent in January after surging 1.5 per cent in December.

These so-called core capital goods orders jumped 8.3 per cent year-on-year in January, underpinning manufacturing, which accounts for 11.9 per cent of the U.S. economy. Core capital goods shipments, which are used to calculate equipment spending in the government’s gross domestic product measurement, accelerated 2.1 per cent after increasing 1.0 per cent in December.

“While there is still plenty we don’t know about activity in the first quarter as a whole, we think that real growth in equipment spending will be strong,” said Daniel Silver, an economist at JPMorgan in New York.

Economists last week boosted their first-quarter GDP growth estimates to as high as a 6-per-cent annualized rate from as low as a 2.3-per-cent pace following the blowout retail sales data and indications that the White House’s massive stimulus package could be fully approved.

The economy grew at a 4.1-per-cent rate last quarter, the Commerce Department said in its second estimate of fourth-quarter GDP growth on Thursday. That was a slight upward revision from the 4.0-per-cent pace reported in January and a sharp deceleration from a record 33.4-per-cent rate in the third quarter. 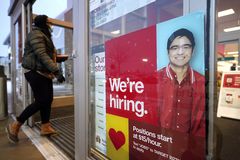 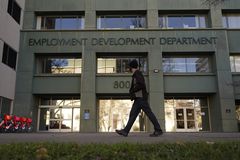 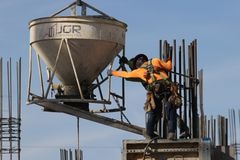