I’ve heard of companies offering unlimited vacation to their employees. Would it work for my company?

Before implementing the trendy unlimited vacation policy favoured by cool companies like Netflix and Glassdoor, stop for a second and make an assessment. “Are people using up their allotted vacation time as it is?” asks Beverly Beuermann-King, an organizational stress and resiliency expert. She’s also the spokesperson for Expedia’s Vacation Deprivation survey, which every year reveals a bleak truth: While we might crave a break, Canadians as a whole fail to use 40 million vacation days each year. This is your problem as a boss, whether you offer unlimited vacations or not, and it’s a far more real issue than an employee’s desire for an eight-month trip to Thailand. “Even when offered unlimited time, people feel they have too much to do or they’ll be seen as not dedicated or people are secretly monitoring their time anyway,” says Beuermann-King. Tackle these problems through reasonable workloads, good communication and flexible hours. And make sure you’re taking your own vacations, which sets a precedent. These are the first steps toward creating a work environment that sucks less. Once you’ve addressed your workplace culture, an unlimited vacation policy will fit right in, with only the slightest margin for error. “The only downside is when someone abuses it, which probably 98% of the people who work for you won’t,” says Beuermann-King. But those 2% who are bad apples will be easier to spot than ever before.

I’m worried one of my top performers wants to leave. She hasn’t received a job offer (yet), but I think she’s looking around. What should I do?

Just for fun, let’s turn this question upside down and ask Henry Goldbeck, a headhunter in Vancouver, what a bad boss would do to make it easier to lure away a star worker. The answer? Nothing at all. “The worst thing a boss could do is wait until she has an offer and resigns, and then say, ‘Well, what can we do? Do you want more money?’” Even the sweetest perks won’t make much difference, says Goldbeck, especially since the employee now knows you could have offered a better deal the whole time. Instead, good bosses should pre-empt this bad blood and actively move in the other direction. “If she’s your star performer, you should have an idea of what’s wrong and what might fix it—maybe more vacation, a raise, management opportunities, educational experience,” he says. Money, he adds, is rarely the main motivator (and if you have no idea what’s bugging the employee, consider the problem could be you). But you won’t really know until you ask. “Take that employee out to lunch, and tell them you value them and want them to be happy,” says Goldbeck. Skip any aggressive questions about their job search and focus on making this job awesome. “Ask for specific things you can do and then do them,” he says. And know it’s very, very, very hard to leave a boss who cares that much.

I’ve been invited to an event that’s “business formal.” What does that even mean?

As far as strange-seeming dress codes go, this one’s actually refreshingly straightforward. “‘Business formal’ basically means a matched business suit,” says Kimberly Law, an image consultant. “For men, that’s a tailored jacket and pants. For women, the pants can be a skirt or even a dress—as long as they’re the same colour and fabric.” Then all the same formal rules apply: neckties for men, stockings for women, accessories that are simple but not boring. In general, the darker the suit, the more formal your outfit, but that doesn’t mean black should be your go-to. (“It’s intimidating,” Law says.) And, last but not least, every time you hear the word “formal,” it’s always better to be overdressed than under. “You can always loosen your tie,” says Law, “but you can’t go the other way.”

ROB Magazine
Ask the experts: What’s the secret to keeping the peace with a board of directors? Pretend you’re married to it
January 29, 2020 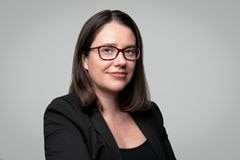