It’s easy to forget that BCE was in shambolic condition when George Cope took charge. Twelve years ago, the telco giant had bloated costs and archaic infrastructure, and was mired in an ill-fated takeover bid. Cope started his era by cutting 2,500 jobs. But then there was expansion—$15 billion spent on acquisitions including CTV, Astral and the Source, plus a $4-billion-a-year investment in a fibre optic network. You can quantify the success of this overhaul in different ways: 54 consecutive quarters of growth, 15 dividend hikes or one NBA Championship for the Toronto Raptors, partly owned by BCE and enthusiastically cheered by the CEO himself.

Yet the most telling statistic from Cope’s tenure might be the 1,013,915,275 texts, tweets and calls made as part of the Bell Let’s Talk campaign. The initiative exists because Cope made it a priority; it succeeded because he led it with the same focus he brought to the rest of BCE.

“What has been remarkable is the amount of time, effort, energy, insight and perspective George has brought to this initiative from day one,” says Mary Deacon, the chair of Bell Let’s Talk and former president of the Centre for Addiction and Mental Health (CAMH) foundation. “Working in philanthropy for 25 years, I’ve never dealt with a corporation that had such an incredible degree of engagement, right from the very top.”

Cope became Bell’s CEO—after two years as COO—in July 2008. He took charge just as the financial crisis scuttled a privatization bid by the Ontario Teachers’ Pension Plan. So Cope’s top priority was a 100-day restructuring plan aimed at slicing its middle-management ranks and refocusing the firm on customer service. By 2009, the CEO was mulling over flaws in the company’s charitable giving. “I think he compared it to sprinkling water on dandelions across the country, and not making any difference in any meaningful way,” says Thomas O’Neill, a board member who became chair in 2009. “He was also very concerned about branding. He wanted Bell to be recognized for something.”

Bell would buy plenty of tables at plenty of charitable events and give to myriad causes, but with no guiding mission. “Like a lot of what happened in the company—in my opinion—we had lost focus,” says Cope. “So we said, we should do this with the same discipline and structure we’re bringing to the rest of the company. Let’s focus in one area.”

The chosen focal point had personal resonance for Cope: His mother suffered from bipolar disorder and was institutionalized for two years when he was young. But there was also a clear connection between the cause and Bell’s core business. “I mean, Let’s Talk—what a great play on what our business has been for 100 years,” Cope says.

Overcoming our reluctance to discuss mental health became core to the program’s mission—but first Cope needed to deal with the stigma within his own team. “Before we launched the program, some key people at senior levels asked me not to do it,” Cope says. “Our board was very supportive. But I would say supportive of me, yet cautious on what we were about to do.”

Cope’s proposal was to dedicate 75% of the company’s philanthropic activity to this one cause. Objections in the boardroom were limited; O’Neill says the CEO has a knack for getting people onside with a plan. “George is pretty transparent,” O’Neill says. “He said, ‘This is what we’re thinking about.’ And he took us through his thinking. And it was rock solid.” Recruiting Deacon, a self-described “mental health do-gooder,” to lead the program made the plan seem both credible and feasible to the board.

Before pushing ahead with a public campaign, Cope realized that Bell first needed to look at its own approach to mental health. (He describes this as “walking the talk.” That’s a phrase used by many people associated with the program as well. O’Neill notes when Cope introduces a big initiative, even entry-level employees know what Bell is doing—and why.) The annual “Bell Let’s Talk” day and charitable giving might generate buzz, but the company’s internal reforms have created a blueprint for other firms to follow. It increased its benefits coverage for psychological care and implemented new training for managers to support employees returning to work. The end result was a 20% reduction in short-term disability claims and a 50% cut in mental health-related relapses. The company estimates for every dollar invested in mental health programs, there has been a return of $4.10.

The company has faced criticism over the years that many of its workers still face high-stress conditions, particularly in call centres, but Cope argues that any large company will always have room to improve. “We’ll never be perfect. We’ve never said that we are. But we know that we’re much better than what we were,” he says.

The last step in the process is the most well known. In September 2010, the company made a $50-million, five-year commitment to funding mental health projects. (The initiative was renewed in 2015 for another five years.) That money has funded projects large and small across Canada, from endowing research chairs to funding the training of two “mental health first aid instructors” for rural Newfoundland. The following year, Bell held the first Let’s Talk Day, donating five cents to the cause for every text and long-distance call made. One misconception is that Bell is fundraising on these days—but all the cash comes from company coffers, which might heighten public participation. “Kids on social media figure out this is how to get back at us for their cellphone bills,” jokes Cope.

The program was buoyed in its early days by the support of Olympian Clara Hughes, whom Cope met at the 2010 Winter Games in Vancouver. When she heard about his plan, Hughes offered to speak publicly for the first time about her own battle with depression as the program’s ambassador. She was the first high-profile name to sign on, but everyone from Ellen DeGeneres to Anderson Cooper have since pitched in (owning CTV has helped with star power).

But perhaps the biggest name associated with Let’s Talk is Bell’s itself. “Some people have asked, ‘Why does Bell need to put its name on it? Aren’t you promoting Bell?’ And my answer is, that’s the whole magic of it,” Cope says. “We’re not withdrawing. We’re saying one of the largest companies in Canada is going to support this cause.” In that spirit, BCE donated $10 million toward the Bell Gateway building at CAMH in Toronto, making it the first company in North America to put its name on a psychiatric hospital.

“That goes a long way to change public attitudes and perception,” says Catherine Zahn, the president and CEO of CAMH. “Cope is a pioneer in the idea of corporate social justice and philanthropy. I can’t think of anybody else I would point to.”

Cope retires from Bell on Jan. 5, two weeks before the next Let’s Talk day. In truth, he’s simply trading one Bay Street tower for another: He’ll become the chairman of BMO in March, replacing the retiring Robert Pritchard. Banks and telcos are two things consumers love to hate. But with Let’s Talk, Cope found a way to make people admire a phone company.

“Let’s be honest—we provide telecom services. Everyone has to write us a cheque every month,” he says. “But this helped people see the values of this company. And our employees know we’re doing something beyond what we do every day.” 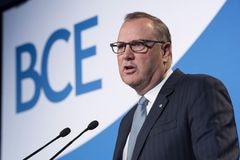 The game plan: How BCE's George Cope cuts a deal
May 16, 2018
Follow James Cowan on Twitter @jamescowan
Report an error Editorial code of conduct
Due to technical reasons, we have temporarily removed commenting from our articles. We hope to have this fixed soon. Thank you for your patience. If you are looking to give feedback on our new site, please send it along to feedback@globeandmail.com. If you want to write a letter to the editor, please forward to letters@globeandmail.com.
Comments