When Calgary won its bid to host the 2023 World Petroleum Congress, it did so by a whisker. Canada’s energy capital beat out Baku, Azerbaijan, by one vote on the fourth ballot of an election among petroleum-producing nations this past June. The triennial event is dubbed the “Olympics of oil and gas,” and Calgary last hosted it in 2000. But this victory was extra sweet because in the previous election, the city was defeated by its chief rival, Houston, which will host next year’s event.

“What a shot in the arm for the Canadian energy sector,” Calgary Mayor Naheed Nenshi gushed following the vote. “They understood that Calgary remains an epicentre—a global epicentre—for the world oil and gas industry.”

Given the drubbing Alberta’s oil sands have taken in recent years, Calgary could sure use the international recognition and the economic boost. Despite Nenshi’s cheerleading, the city is a long way from restoring its cachet as a global energy hub. Canada’s intractable pipeline politics have gummed up the Trans Mountain pipeline expansion, cast a pall over new energy projects and given Houston a boost as more investment dollars head south.

As Calgary is buffeted by a cooling housing market, a glut of office space and one of the highest unemployment rates in the country, Houston is booming. Fourteen new pipeline projects are underway in the Permian basin in Texas and southeastern New Mexico. While most of those pipelines will transport natural gas products, five will transport U.S. crude oil to the Gulf Coast. At least four of those projects will be operational by the end of 2020, helping U.S. producers feed global demand.

Houston is also benefiting because Canadian producers have often been forced to sell their crude to U.S. refineries at a steep discount, due to a lack of diverse markets close by and insufficient pipeline capacity to transport it longer distances. Meanwhile, refiners in eastern Canada are importing foreign oil because there’s a lack of political will to build a pipeline from Alberta.

“A lot of the investment community is sitting on the fence with respect to Canadian energy,” said Alex Pourbaix, CEO of Cenovus Energy, in a recent roundtable discussion with journalists at The Globe and Mail.

There’s been an exodus of foreign oil companies from the oil sands, and some European banks have stopped funding new projects and pipelines. Direct employment in Canada’s energy sector, which was roughly 226,500 before oil prices tumbled in 2014, is expected to decline to 173,300 this year, according to Petroleum Labour Market Information. Capital investment has also fallen over that same five-year period. That’s a problem, because the energy sector accounts for 11.1%, or $230 billion, of Canada’s nominal GDP.

Although greenwashed poseurs in British Columbia and Quebec would have us believe otherwise, righteous indignation doesn’t pay the bills. No one is denying that climate change is real or that Canada needs to shift to a low-carbon economy. But that transition can’t happen overnight. Shutting down the oil sands won’t erase Asian demand for petroleum. It will only make Canada poorer.

Canadians aren’t a jingoistic people, but it should stick in our craw that Houston is profiting from Calgary’s privation. With a federal election looming, it’s time to end this family feud and support our own. The next government should focus on building the Trans Mountain pipeline expansion, resurrecting the Energy East pipeline project and continuing diplomatic efforts to remove obstacles facing Enbridge’s Lines 3 and 5 south of the border.

Tossing the Liberals from office on October 21 would also go a long way to restoring investor confidence in the oil sands. Prime Minister Justin Trudeau’s handling of the energy file has dented Cowtown’s fortunes and damaged Canada’s credibility. As they say in Houston, he’s all hat and no cattle. 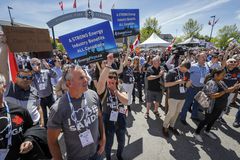 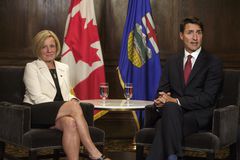 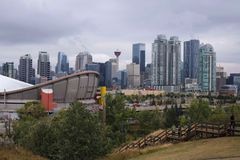