The headlines about the NAFTA renegotiations have been jarring for Canadian business owners. Almost daily, they hear that the talks are going well or that they are going poorly, and it’s hard to know what any of it means for those trying to sell their products and services in the U.S. market.

At the Globe and Mail Small Business Summit, held in Toronto on May 8, Laura Dawson, director of the Wilson Center’s Canada Institute, said there is less to worry about than recent headlines suggest.

“If you believed everything you read in the news, you’d run for the hills,” she said. “It looks like Canada is being persecuted by the States, but the reality is different.”

Big-ticket items like softwood lumber, Mexican produce and automotive rules of origin are still being negotiated, while many of the issues that impact smaller business owners have already been settled among the three countries, Ms. Dawson said. “We’ve fought about softwood lumber with the Americans since George Washington’s time, honestly. That’s what gets the headlines. But the things that benefit small businesses have already been agreed to.” For example, Canada’s Minister of Foreign Affairs Chrystia Freeland has negotiated improvements to the movement of goods and services, reductions in red tape and modernization of customs processes.

Still, reaching a final agreement won’t be without pains. “Going into the negotiations has cost Canadians in terms of tariff volatility and long-term investments,” Ms. Dawson said, adding that businesses with U.S. government contracts, and ones that work in the auto, steel or agriculture sectors, will likely experience more obstacles. Upcoming U.S. midterm elections and the Mexican presidential election this July could also mean that NAFTA uncertainty extends to 2019. “Usually you wouldn’t continue negotiations during such a politically volatile period, but there are no rules.”

All of this may sound stressful, but Ms. Dawson said that there are some good things on the horizon. “The new NAFTA will be good for small business, but the cost we’re paying now is uncertainty.” The key to weathering the shift is to diversify, “so that you can continue to have eligibility for U.S. contracts, so you can continue to bring your U.S. supplies in and have the people you need on the job.”

Leslie Irwin, a business manager for Canadian-owned education enhancement company UGOT Active Kids, attended the session to get insights into her company’s U.S. operations. While the effects of the trade talks can be confusing, she said their business in the United States remains strong. “We’re looking at growing our business concurrently in Canada and the United States, and I’ve been conscious of trying to get the growth to be quite even between the two countries, but the U.S. is actually growing faster, and with the exchange rate, it’s having a bigger impact,” she said.

Ms. Irwin adds that there is some benefit to staying small while NAFTA talks are underway. “In a lot of ways we’re flying under the radar, because you say to yourself: ‘If you keep below this minimum, we won’t have to deal with that,’” she said. “Being a huge company is not my goal. Making a difference to the employees we have and being face-to-face with our clients is way more important to me.”

In order to protect your business from currency fluctuations, Ms. Dawson suggests adding money to a U.S. account when the Canadian dollar is strong. She also said that businesses transferring goods should consult with a financial planner who specializes in the import-export sector and take advantage of new deregulation measures in certain sectors.

“The deregulatory impulse in the U.S. is quite good,” Ms. Dawson said. “Now is a good time to reduce the red tape on how many inspectors need to look at your toothpaste or your ankle brace or your child’s toy. Before, we had battling regulators trying to ratchet up the amount of regulations they could put in place, and now they’re inclined to work together.”

Ms. Dawson said the challenges that small businesses are currently weathering will ultimately help to bring the Canadian and U.S. economies into the 21st century, thus benefiting owners in the long run. “NAFTA is a senior citizen. It’s 25 years old and it was developed before the digital economy. They are trying to update the agreement to reflect the way the economy is now.” 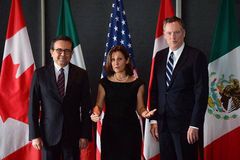 Trudeau heads to U.S. to pitch free trade ahead of NAFTA deadline
May 16, 2018 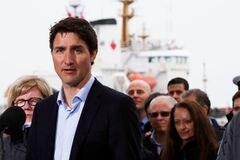 Mexico says NAFTA deal unlikely this week, but Canada is upbeat
May 15, 2018 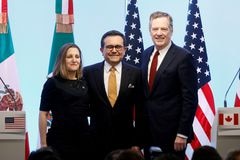