Brian Kerr was just 11 years old when he rode his bike down to Ontario cottage country’s legendary ice cream company Kawartha Dairy in Bobcaygeon, Ont., to ask for a job.

Monty Crowe, part of the family that still owns 100 per cent of the dairy producer, wholesaler and retailer, hired the hometown boy on the spot and assigned him the task of scooping ice into bags for fishermen’s coolers – a side business.

After a 27-year absence, much of it spent working for a giant U.S. food company, Mr. Kerr, now 46, is back working at Kawartha Dairy. But this time, he is the chief executive and general manager.

He has begun the task of steering the 150-employee company through a new phase in its 82-year history. With the market for its products “pretty much saturated” in cottage country, he hopes to preside over expansion of its own retail outlets as well as its distribution to other stores into more urban areas, while ensuring Kawartha Dairy stays true to its small-town family-run roots.

During Mr. Kerr’s first stint working at Kawartha Dairy, he graduated to loading and driving delivery trucks, staying with the company part time until he was 19. “They gave me responsibility and treated me with respect,” he says. “I loved that.”

Monty Crowe – one of the second-generation owners – had become a bit of a mentor. When Mr. Kerr suggested he might stay on at Kawartha Dairy to avoid taking on university debt, Monty (now deceased) steered him toward getting an education.

“I didn’t get a chance to go to school and I always regretted it,” he told Mr. Kerr. “Go get your degree. If you ever want to come back and work for us, you call me.”

Last September, Mr. Kerr finally returned to the fold after a “lucky meeting” on the streets of Bobcaygeon with Mike Crowe, Monty’s son, and director of operations for Kawartha Dairy.

Mr. Kerr, an accountant by training, had just parted ways with the Kraft Heinz Canada’s Toronto office after a 20-year career culminating in a job as chief marketing officer for Canada. With Kawartha’s general manager due to retire, the Crowe family invited Mr. Kerr to come back to run the company.

Ten months into the job, Mr. Kerr, who lives in Newmarket but has also recently purchased a place on Sturgeon Lake in Bobcaygeon, has been putting in long hours ramping up for Kawartha’s crucial summer season.

“There is some anxiousness,” he says, “but it’s a good feeling – similar to the one I get before I do a triathlon. I’m anxious, but ready to get it done.”

Earlier this year, he presided over the opening of a new 54,000-foot distribution centre (planned and begun before he rejoined the company), now “full of ice cream ready to be served.” He has also been on a hiring blitz for permanent and seasonal summer employees to work in the facility, as well as Kawartha Dairy’s 10 retail stores.

Although Mr. Kerr has roots in Bobcaygeon and first-hand knowledge of how Kawartha Dairy operates, he is still not a Crowe and seven Crowes still work at the dairy. At least some of the family see that as an advantage.

“I felt we would really benefit from some outside experience and leadership,” Mike Crowe says. “It’s sometimes hard to take direction from your brother or your cousin or your uncle or your nephew. It helps to have a non-family member at the top.”

Kawartha Dairy’s president (and Mike’s uncle), Jeff Crowe, agrees wholeheartedly. Mr. Kerr is in the tricky position of “answering to the owners and yet sometimes telling them to do things they’re not used to doing,” he says. But “he worked with some of the family members that are now in management as a kid. It’s really a very good fit.”

Jim Kilpatrick, leader of Deloitte Canada’s food and consumer products industry practice in Canada, says there is an element of risk for Kawartha Dairy in moving beyond its traditional stomping ground. The company has thus far managed to capitalize on its rural roots in cottage country. “They’re seen as a local business. I think many cottagers try to support that,” he says. “And the experience of getting an ice cream cone in cottage country helps build loyalty to their brand.”

But, Mr. Kilpatrick says, “there’s no shortage of competition in large established markets for these products.” In a health-focused world, even those who indulge in a Kawartha Dairy cone at the cottage “may not necessarily replicate that experience in the city,” he says. In addition, because it is small and independent, Kawartha Dairy will be less able to control its costs through economies of scale than big dairy processors.

Mr. Kerr points out two new stores have already opened in Barrie and Newmarket – urban centres on the fringes of the Greater Toronto Area. Both met with quick success. In fact, the Newmarket store sold twice as much ice cream as expected.

“I think urban expansion makes sense,” he says. “And we’d be silly to not look at Toronto. It’s the biggest market in Canada.”

Mr. Kerr is confident Kawartha Dairy’s ice cream can compete with other premium (and often more expensive) brands, such as Haagen-Dazs and Ben & Jerry’s. It is still made the same way it always has been, “with fresh milk received daily from local farms,” he says.

In the decades since Jack and Ila Crowe founded the dairy in 1937, it has grown almost entirely by word of mouth. It has never advertised on television, and yet it now operates 10 company-owned retail dairy bars. Hundreds of independent ice cream stands at cottage country resorts, stores and camps also carry Kawartha Dairy’s products, along with eight grocery chains in Ontario, including Costco, Longo’s and Metro.

“We’ve doubled our sales and the number of employees over the last 10 years,” Mr. Kerr says. Although he wouldn’t reveal revenue, he says that in addition to the company’s 150 full-time employees, it has hundreds more to staff its dairy bars in the busy summer season. “This family has been in business for 82 years because they’ve always put quality first,” he says.

In the future – as in the past – Kawartha Dairy’s approach to growth will be “steady and cautious,” Mr. Kerr adds. He has no intention of spearheading a national expansion – at least for now.

The benefit of working for a family-owned operation is “you’re not chasing the latest quarter,” he says. “It feels great to be bringing my learnings back to a family-owned and -operated business, where long-term decisions take precedence.” 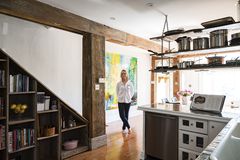 Canadian dairy co-operative Agropur recalls two ice cream sandwich brands
July 20, 2019
Follow us on Twitter @globesmallbiz Opens in a new window
Report an error Editorial code of conduct
Due to technical reasons, we have temporarily removed commenting from our articles. We hope to have this fixed soon. Thank you for your patience. If you are looking to give feedback on our new site, please send it along to feedback@globeandmail.com. If you want to write a letter to the editor, please forward to letters@globeandmail.com.
Comments