In a time when chefs have become rock stars, Leemo Han prefers to stay hidden in the background.

Mr. Han’s Toronto restaurants – Hanmoto, Pinky’s Ca Phe, Juanmoto at Cold Tea, the recently opened Seoul Shakers and the soon-to-come Shakers Club – match his personality. They have no phone numbers and no websites. They’re located off the main drags — hidden away around a corner in a nondescript garage-like building (Hanmoto) or in what looks like a house (Pinky’s) with no signage, for example. They have Instagram accounts, but really only to announce when they’re closed. And Mr. Han himself almost never speaks with the media.

But Mr. Han’s restaurants are also always among the city’s busiest spots thanks to their laid-back vibe, bold flavours and late-night hours.

“I go with the old conventional style of word-of-mouth,” Mr. Han says after a borderline harassment volume of messages convinces him to speak with me. “Obviously social media works. It’s kind of the new way of advertising, but I feel like word-of-mouth has more depth to it. That’s more my style: being hidden, being low-key, letting what we do speak for itself.”

Mr. Han, now 31 years old, first made a splash on the local scene in 2009 when he opened Swish by Han, serving his take on modern Korean-American cuisine near St. Lawrence Market.

He was young and had no formal training, but had worked his way through local Japanese restaurants since returning to Canada at 18 years old after a childhood spent in Philadelphia. (Mr. Han was born in Toronto, but his family moved when he was young.) Mr. Han was still green, but extremely driven; he saved up and opened his own place with the help of his younger brother Leeto.

“In the first six months, we almost went bankrupt 'cause no one was coming,” Mr. Han recalls. But soon word got out about Mr. Han’s exciting Korean-American dishes such as kimchi tuna melt at lunch and lobster bibimbap at dinner. The restaurant flourished.

Leemo and Leeto’s 2012 follow-up effort, Oddseoul, was even a bigger hit. While the neighbourhood around Swish had become more corporate and subdued, Oddseoul was positioned right in the middle of the Ossington nightlife boom. Its industrial decor, creative cocktails and bright small plates inspired by Mr. Han’s Korean roots were a perfect match.

Swish closed in 2014 when the brothers realized smaller spots offered more potential profitability. Oddseoul is now run solely by Leeto, but the successful formula honed there has become Leemo’s signature at all his solo ventures.

First, at Hanmoto, which opened in early 2015 featuring Japanese-American izakaya-style dishes, and then at Pinky’s in 2017, serving Vietnamese-inspired fare including a pho-flavoured beef dip sandwich.

There’s an appealing rawness both to Mr. Han’s food and the rooms he designs: exposed brick walls, industrial furniture, vintage knick-knacks, neon “Prescriptions” signs above the bar and wood accents.

“My main focus is the vibe,” Mr. Han says. “I want you to feel like you’re in a movie, or in some different world.”

And Mr. Han does more than cook and handle the design. All the building, demolition and every little bit of equipment sourcing are done in-house, which allows Mr. Han to open restaurants much more cheaply than his competitors. The kitchen at Seoul Shakers, for example, cost less than $1,000 to put together.

Unsurprisingly, this comes at some personal cost: Mr. Han averages under four hours of sleep and rarely sees his wife of two years. He has rejected offers to partner in larger restaurants with investors, but sometimes Mr. Han simply can’t resist a new challenge.

It’s how he ended up taking over the kitchen at the hidden Kensington Market bar Cold Tea this past spring under the name Juanmoto. This venture is Mr. Han’s only project that’s not fully his own, but the hidden nature of the space – walk through a mini-shopping plaza to find its unmarked door – matches his aesthetic. Flashy hotel restaurant partnership this is not.

Mr. Han owns all his other projects outright, with no loans and no investors. Restaurants are a notoriously tough business, but he says revenues are strong.

“The main thing that I do when the revenue for the businesses is growing and growing, is I never take for myself. I get less than some of my kitchen guys,” Mr. Han says. “I keep it all in the business. I don’t need to buy nice things, I’d rather just fund my projects.”

Seoul Shakers, which opened on Sept. 22 with no press release and no pre-opening hype, marks Mr. Han’s return to the Korean flavours he popularized at Swish and Oddseoul. Shakers Club will also feature Korean touches but this time in an all-day concept with items available for takeout alongside a full bar and food menu.

“I have so many ideas. If I wasn’t married, I’d probably keep going,” Mr. Han says of his plans once Shakers Club is up and running in the coming months.

And if he ever does allow himself to relax, don’t expect him to ever fully disappear from the scene.

“I just want to do this until I’m old, and then I’ll have one spot where I live upstairs,” Mr. Han says. “I’ll just retire cooking like that. It’s better than doing nothing.”

Toronto chefs aim to transform the city’s Vietnamese cuisine
February 3, 2017
Review
Would you eat at Hanmoto? Have a closer look at the space and the food
March 27, 2015
Why making kimchi is a family affair for two Toronto restaurateurs
February 11, 2014 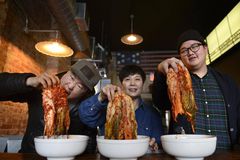