Go big or go home may be a catchy idiom, but for many budding food entrepreneurs, the reality is clear: Go small or go bankrupt.

In response to soaring commercial lease rates in major Canadian cities, some food businesses are getting creative – inhabiting little nooks and crannies that make your cozy corner café seem palatial by comparison. Today, entrance vestibules, unused storage closets inside other businesses, and even tiny display windows are real options for tiny restaurants with outsized ambitions.

On Spadina Avenue just south of Richmond Street in downtown Toronto, for example, Joshua Campos serves superlative coffee out of an 18-square-foot display window. “I approached the landlord looking to rent the space and at first he thought it was a joke,” Mr. Campos said. But the Coffee Lab’s business aspirations are no laughing matter. “On the business side, the goal is to be the No. 1 retailer as far as business footprint.” Apple is currently recognized as one of the global leaders in that metric, with annual sales of about US$5,500 per square foot across their stores, but six months into his operation on Spadina, Mr. Campos reports that he’s nearly tripling that number.

Coffee Lab’s tiny space means there’s only room for the equipment and one barista, which Mr. Campos argues is the perfect setup for his on-the-go customer base of nearby office workers. Already, about a third of his orders are placed in advance on the Ritual app and picked up when ready. So even in winter, Mr. Campos believes business will remain strong even though he can’t offer customers any respite from the cold.

The concept has been so successful that Mr. Campos is currently looking for more spaces between 20 square feet and 100 square feet to replicate his model across the city. But small spaces aren’t always easy to find. “There is a huge demand for tiny spaces in the city, but there’s very few of those available,” says Ori Grad, founder of CHI Real Estate Group, which specializes in restaurant and bar listings in the Greater Toronto Area. “And a space that’s under 500 square feet is going to rent per square foot for much, much more than a place that’s 3,000.” Mr. Campos declined to disclose his rent, but concurred: “I pay a lot for what I have, but very little for where I am.”

Operating out of small spaces isn’t a new idea, but rapid increases in commercial lease rates have spurred more entrepreneurs to look for alternatives to traditional spaces. “It’s hard for little guys to get into the market,” Mr. Grad said. “You have to build a space out, put in your plumbing, pay first and last month’s rent – it’s expensive. And the risk of bigger places can be discouraging when you know how often restaurants fail.”

In Vancouver, restaurant real estate specialist Shane Morck estimates that effective rental rates in high-traffic areas have risen by about 50 per cent in the past five to seven years. “What a lot of people don’t realize is that in commercial real estate, property tax gets passed on as an extra cost to the tenant,” he explained. “So rents are going up because property values have basically doubled.” In Toronto, Mr. Grad has seen some downtown rents doubling compared to ten years ago, even before taking into account increases such as those Mr. Morck identified.

One solution Mr. Grad has seen lately is for tenants to share space. In fact, the first iteration of Coffee Lab (which is now closed) was actually housed in a tiny corner of a bookstore. That arrangement wasn’t ideal for Mr. Campos, who prefers to have control over every aspect of his operation. But the model works for others, such as North of Brooklyn Pizzeria, which operates takeout windows inside two popular Toronto bars, The Greater Good and Get Well.

The partnerships began when the operators of Get Well noticed that patrons were often ordering North of Brooklyn pizza to their bar. An unused space at the back of the room suddenly seemed like an opportunity, and eventually, they persuaded the pizza makers to build a small kitchen and move in.

Making and storing dough is a messy and space-consuming process, so with plans for expansion in other small takeout and delivery-driven outposts across the city in mind, North of Brooklyn opted to open a commissary kitchen in a lower-rent area to supply their smaller shops in high-density neighbourhoods. "The commissary model definitely makes the small spaces more manageable,” said Josh Spatz, North of Brooklyn’s owner. “That was a response to the challenge of having them as both a restaurant and a prep space [and] it keeps the rent somewhat reasonable.”

But in some cases, a commissary is not an option and business owners simply have to find a way to make multiple uses of a tiny space, as Drogheria Fine does in Montreal. There, out of 300 square feet, Franco Gattuso and his team essentially operate three businesses at once, all built around the tomato sauce they make in-store. “I wholesale, I retail and I serve tastings of boxes of gnocchi in front through a window,” Mr. Gattuso explained.

Those gnocchi bathed in the shop’s signature tomato sauce have become so popular that Mr. Gattuso has even had to find a way to dole them out in the frigid Montreal winter, allowing a couple customers at a time into the tiny canning-factory-slash-restaurant in one.

More entrepreneurs may feel the need to follow Drogheria’s model, as cannabis retailers add pressure on commercial real estate in cities such as Toronto.

“We’re inundated with the most aggressive offers I’ve ever seen now for dispensaries, so ultimately if you’re looking to rent out a little space, you’re competing with guys coming in well above market value with signing bonuses that are hard to refuse,” Mr. Grad said. “For the little guys, it’s hard to compete with those offers.” 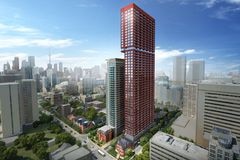 Why are restaurants trying to get diners to eat faster?
Subscriber content
November 21, 2018 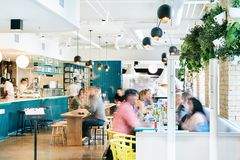 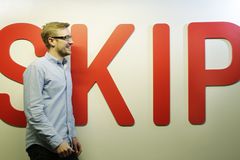