A pair of Kitchener, Ont.-based entrepreneurs are trying to give smartphone-dependent small-business owners some much-needed work-life balance with their OpenPhone voice-over-IP (VOIP) application.

The service, which came out on Android phones in mid-June after launching on iOS in Apple’s App Store in January, adds credibility to the business, users say.

Mr. Raissi’s background is in product development at contractor-estimate-software company Joist, while Ms. Kulya worked in product management at video-marketing software company Vidyard. The two met through a mutual friend and shared an interest in product development. Each also understands the issues small-business owners have in separating work and personal calls and the challenges of trying to share the workload around customer communication across various team members.

“The vast majority of small-business owners are still using their personal phone number,” Mr. Raissi says. “It’s painful for them on so many different levels. Privacy? They have none of that. They get calls all the time. ... They can’t share their [personal] number with their team. We think by giving small-business owners better tools to communicate, we can help them bring in more money.”

OpenPhone also includes call forwarding and voicemail-to-text transcription. As it grows, the company is hoping to add more services such as support for multiple phone numbers, more customization power such as business hours, phone menus, greeting messages and a desktop app.

Ms. Kulya says the main advantage the app has is giving business owners the ability to separate their business and personal communication. “[Small-business owners] love being able to distinguish when calls are coming in if it’s personal or for business, so they can respond appropriately … if at all,” she says. Also, the option of having a toll-free number can make the small business appear larger and more professional.

OpenPhone isn’t the first company to offer VoIP services to small businesses. Competitors include Grasshopper, Phone.com and Google Voice, to name a few. OpenPhone believes its app is simpler and more user-friendly than those of its peers.

Mark MacLeod, founder and president of SurePath Capital Partners, a small-business investment bank with a focus on the software space, says services such as OpenPhone are in greater demand due to the rise in telecommuting, the gig economy and a growing number of people starting their own companies either full-time or as a side gig. The VoIP platforms give business owners more freedom to run their companies outside of a traditional office setting and without the need for landlines or to buy a second cell phone.

“What we’re seeing is a change in the nature of entrepreneurship,” says Mr. MacLeod, whose company uses the Grasshopper service.

He says the key to success for OpenPhone will be finding a niche market as competition in the sector intensifies from both VOIP players and traditional telecom companies. “For them to stand out, they will have to out-innovate these larger competitors,” Mr. MacLeod says.

Leona Driver, owner of Denton, Tex.,-based home-care-services company Leona’s Helping Hands, says she chose OpenPhone because it’s a nimble startup that’s open to feedback from its users. For example, Ms. Driver, alongside a number of other OpenPhone users, asked the company to allow its customers to build separate business and personal contact lists — a change they recently made.

One of her favourite features of OpenPhone is the ability to turn off the app when she’s busy with a client or away. The calls and messages are immediately picked up by one of her colleagues. “Being able to turn off work when you need to is amazing,” Ms. Driver says.

Melissa Jean Clark, a Toronto-based Web developer and OpenPhone user, likes that the service gives her a toll-free number to give to clients while keeping her personal number private.

“It seems more professional,” she says. “Before I had OpenPhone I didn’t really share my phone number with [clients]. I tried to always call them instead.”

Mr. Raissi believes OpenPhone’s biggest competition right now is personal phone numbers, which many small-business owners still use for their business. OpenPhone has about 500 monthly subscribers today, with a goal to hit 2,500 by the end of the summer.

Its founders, who are also its only employees, have bootstrapped the company so far. They expect to seek seed financing in the next few months and then hire staff as the company grows.

“Our focus is to build the product and get it to the point where people are going to come and ask to invest in us,” Mr. Raissi says. “Because the product is paying for itself we aren’t in a rush … we want to build a reputation with our users first.” 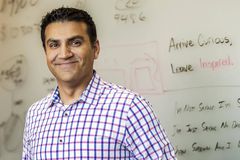 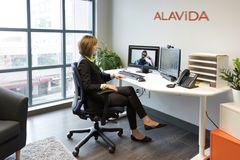 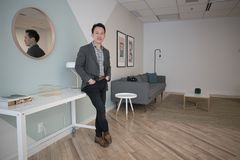