With marijuana legalization only four months away, Bank of Montreal is elevating its exposure to the cannabis sector, dealing a potential blow to profits at Bay Street’s independent firms.

In a first for the lender, BMO has agreed to a $200-million credit facility with Aurora Cannabis, providing the company with access to relatively cheap debt.

The announcement has the potential to shift the balance of power in the marijuana business on Bay Street.

Since the cannabis sector exploded, independent investment banks such as Canaccord Genuity, GMP Securities and Eight Capital have dominated underwriting and advisory work because Canada’s big banks largely sat on the sidelines.

Cannabis runs counter to federal laws south of the border, and the Big Six lenders were concerned about legal ramifications for their U.S. subsidiaries. They have also worried about the sector’s volatility.

Yet over the past few months, BMO started showing some interest, first planting its flag by co-leading a $200-million share sale for Canopy Growth Corp. in January. The bank has remained active since, and its new credit facility signals a significant step forward in its evolution – one large enough to put the independents on notice.

On Bay Street, banks have long used their balance sheets to muscle into high-margin underwriting and advisory work. By lending money to corporate clients, they are able to establish relationships that can be leveraged to advise on their borrowers’ capital raises or mergers and acquisitions.

The tactic has long frustrated independents – smaller firms that do not have the financial capacity to extend such loans.

The impacts of credit arrangements were most notable during the energy crash that started in September, 2014. As oil and gas prices plummeted, many Canadian energy giants launched billion-dollar share sales to help clean up their balance sheets. While the large deals offered a bevy of underwriting fees to investment banks, independent firms were largely shut out of the bonanza.

The drought hurt independents because they had already been struggling. These firms made their names advising junior energy and mining companies, but both sectors have gone quiet since the commodity supercycle crashed in 2012.

The cannabis boom has been a rare opportunity for them to revive deal flow, and Canaccord Genuity has been one of the biggest beneficiaries. In February, the dealer reported a $37-million quarterly profit, its highest in seven years.

Yet there were questions at the time about the sustainability of these earnings. BMO was already showing its interest in the sector. A day after reporting the stellar profit, Canaccord chief executive officer Dan Daviau was asked on a conference call whether he worried the banks would try to steal some of the cannabis business.

“Quite frankly, we’d welcome it,” he responded. “They wouldn’t stand a chance.”

“Most of the money we’ve made in this sector is helping little companies grow to be very big companies,” he added, “and we don’t really perceive bank competition in that area.”

His argument is valid – banks tend to focus on larger clients. However, BMO’s involvement has already affected some client relationships.

Until recently, Canaccord had been Aurora Cannabis’s lead banker for several notable transactions. Yet when Aurora announced its largest takeover yet, a $3.2-billion bid for MedReleaf, BMO served as the buyer’s exclusive financial adviser. (Canaccord is involved in the transaction, but is advising MedReleaf’s board.)

It remains unclear whether other banks are growing more comfortable with the cannabis sector. Until they dive in, the impact on independents may be muted.

But as the other big banks weigh their involvement, BMO has taken the plunge. In an interview, Aurora chief corporate officer Cam Battley said his company had been in talks with BMO for months.

The $200-million credit line will be secured by Aurora’s production facilities, including the one currently under construction in Edmonton, and Mr. Battley said the funds offer “the additional resources we need ... to keep expanding on an international basis.”

Although Canadian Imperial Bank of Commerce had previously arranged a $20-million credit line with MedReleaf, BMO’s is the sector’s first substantial bank loan.

Aurora Cannabis signs loan deal for up to $250-million with Bank of Montreal
June 26, 2018 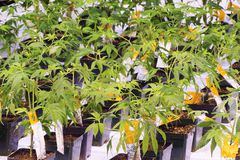