To boost its stake in Canopy Growth Corp., U.S. alcohol giant Constellation Brands Inc. is purchasing 104.5 million new shares from the Canadian pot producer for $48.60 apiece. Multiply those figures together and the investment looks to be worth $5-billion.

But the math isn’t so straightforward, because of a sweetener Constellation receives as part of the deal.

On top of the new shares, Constellation is also getting 140 million warrants, and those securities are worth a lot. Exactly how much is a secret between the two companies, but according to a commonly used financial formula, it could be $800-million. (Warrants are similar to stock options, as they allow their holders to purchase shares in the future, typically at a predetermined price.)

Once these warrants are factored in, Constellation’s net investment looks to be worth less than the headline $5-billion figure. That helps explain why Canopy’s shares are trading around $41, much lower than the $48.60 Constellation paid. Another factor in that price gap: The U.S. booze company has just acquired effective control of Canopy without making a takeover offer to all shareholders.

This is not a normal feature of mergers and acquisitions. More typically, the acquirer purchases control by offering to buy the entire company for a fixed price. In this case, Constellation is boosting its stake in Canopy from about 8 per cent to 38 per cent, and exercising the warrants would allow it to own more than 50 per cent.

There are many instances in which large companies buy sizable stakes in smaller ones − in fact, this is an acquisition tactic the Bank of Nova Scotia has favoured over the years to expand outside of Canada, and one used often by large mining companies. But it is rare to see so many warrants involved, especially ones that seem to have so much value. (One such instance was when Ontario Teachers' Pension Plan and West Face Capital invested equity in Hudson’s Bay Co. to help HBC pay for its purchase of Saks.)

Complicating things further, the warrants that Constellation will receive come in two batches, or tranches − and the financial details of the second batch are sparse.

Constellation will receive 88.5 million warrants that allow it to buy more Canopy shares at $50.40 apiece at any point over the next three years. Constellation will also get 51.3 million warrants that last for three years, but can be exercised to purchase Canopy shares at a variable price − effectively, the average price of Canopy’s stock over the previous week before they are used.

To value options and warrants, investors and bankers typically use a formula known as the Black-Scholes model. While it is widely accepted around the world, its results are highly dependent on assumptions, such as the volatility of the underlying stock price, and changing these variables can dramatically affect the calculated value.

Assuming 40-per-cent volatility, each warrant in the first batch seems to be worth about $6. As for the second batch, it’s harder to value, because its warrants probably can’t be exercised until after the first, and their exercise price is variable. Still, play around with the model and it seems these warrants could be worth about $5 each.

Canopy and Constellation would not comment on their financial assumptions, but warrant values in this range would help to explain why Canopy shares closed Thursday about $8 under Constellation’s investment price. That’s because the $48.60 that Constellation is paying per share isn’t just for equity − it’s also for the warrants, and that warrant value arguably needs to be stripped out.

In M&A, control is a very important thing, and there is usually a premium ascribed to it. The way Canopy chief executive Bruce Linton tells it, control of a burgeoning marijuana company is even more valuable than normal in the cannabis industry right now.

On a conference call Wednesday, Mr. Linton said that in 18 months, the major marijuana players “won’t be any of the cannabis names that are started up in Canada. It will be Big Pharma. It will be other packaged beverage [companies] ... a day doesn’t go by that somebody doesn’t send me an article that the Wrigley family are looking at this, everybody is looking at this." Put simply, the pharmaceutical and beer industries are struggling, and cannabis is the shiny new object.

Perhaps he’s overselling it. But control certainly has some value, and that makes Constellation’s warrants look that much more lucrative − something that can’t be ignored when talking about total deal value. 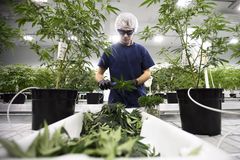 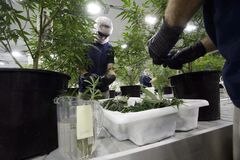