Toronto’s GMP Capital Inc. is in talks to be acquired by Stifel Financial Corp., according to sources in the financial sector, in a deal that would see a U.S. company swallow one of the last sizable independent investment banks in Canada.

GMP Capital, founded in 1995, had a long run as a leading Bay Street investment dealer, but its stock price has slid steadily over eight years as it struggles with a prolonged slump in resource financing, declining trading commissions and a failed expansion strategy. At its peak in 2006, the company was worth $2-billion; its market capitalization on Friday was $150-million.

GMP Capital and Stifel declined to comment on whether the two companies are in negotiations. It is possible the talks could break down, but sources familiar with the situation said the two sides were on track to announce a deal this week. The Globe and Mail granted the sources anonymity because they weren’t authorized to speak publicly about the matter.

Stifel executives were reportedly in Toronto last week trying to negotiate long-term employment contracts with key GMP executives at the Shangri-La Hotel. One source said the goal is to close the takeover deal by September.

Stifel, a full-service investment bank with approximately 7,100 employees, turned a US$385-million profit on revenues of US$3-billion last year. The company has a US$4-billion market capitalization and over the past 10 years its stock price has almost doubled.

GMP Capital is a far smaller entity, with profit of $15-million in 2018 on revenues of $178-million. But it does have one valuable asset in addition to its investment-banking business: It owns a third of wealth-management company Richardson GMP Ltd., which has assets under management of $30-billion. The Winnipeg-based Richardson family also owns a third, as do employees of Richardson GMP. Investment-banking sources said a number of GMP Capital employees intend to move to Richardson GMP if there’s a deal with Stifel.

There is a long tradition of independent investment dealers in Canada eventually selling to larger companies. The sources say GMP Capital caught the attention of several U.S dealers interested in expanding into Canada, including St. Louis-based Stifel. In recent months, there was talk that U.S. players such as Jefferies Financial Group Inc. and Wells Fargo & Co. were also sniffing around GMP, but executives have dismissed this speculation, to date.

Stifel has acquired a string of smaller rivals in recent years as part of a strategy aimed at building what chairman and chief executive Ronald Kruszewski refers to as a “pre-eminent middle-market” investment bank. In his comments on the company’s recent financial results, Mr. Kruszewski said: “In our institutional business, our growth will continue to be driven by the addition of high-quality talent through selective hires and strategic acquisitions.”

Stifel’s last foray into Canada ended poorly. The company inherited a 60-person team with offices in Calgary and Toronto in 2010 when it acquired U.S. rival Thomas Weisel Partners Group, Inc., which previously paid $150-million to buy Canadian boutique dealer Westwind Partners. The Canadian unit never made inroads in domestic underwriting and stock trading and Stifel shut it down in 2013.

Stifel may be attracted to GMP by its robust relationships with cannabis-industry players, although that line of business may also represent a challenge for the U.S. company, according to the sources. U.S. federal regulations restrict investment-banking activity in the cannabis sector. A number of GMP bankers are said to be concerned that they would be forced to turn down lucrative deals in the marijuana industry if they join Stifel.

The future of GMP Capital is a source of fascination in banking circles, as the company was home to larger-than-life founders – including financier Brad Griffiths and trader Mike Wekerle – who stepped away over the past decade. For years, GMP Capital executives were among the country’s highest paid bankers; Tom Budd, the former lead energy banker in GMP’s Calgary office, made $12.5-million in 2002, twice what a bank CEO made that year. In contrast, current GMP CEO Harris Fricker took home $4.3-million last year.

Over Mr. Fricker’s nine-year run as CEO, GMP Capital attempted to extend its reach with acquisitions, buying Calgary-based FirstEnergy Capital Corp. for $99-million in 2016 and spending US$44-million on a New York-based fixed-income business in 2014.

The prolonged downturn in energy markets forced Mr. Fricker to retrench: GMP Capital took a $28.5-million impairment charge against goodwill from acquisitions in the most recent quarter. GMP Capital sold the U.S. fixed-income business late last year and closed a number of offices outside Canada.

GMP Capital’s stock price has been trending downward for several years, closing at $2.02 last Friday compared with $9 five years ago and $27 in 2006. Employees own 24 per cent of the dealer and the Richardson clan owns another 24 per cent.

Over the past five years, more than 50 Canadian investment dealers have exited the industry through amalgamation or takeovers, leaving about 160 domestic companies, according to the Investment Industry Association of Canada (IIAC). In a recent report, IIAC CEO Ian Russell said: “We anticipate even more firms to leave the business in 2019, given the ratcheting up in operating costs and prospect of an extended period of depressed market conditions.”

Mr. Russell warned that fewer independent domestic investment banks spells trouble for Canadian capital markets. “A continuation in this trend will lead to a significant consolidation in the investment industry with the corresponding damaging impact on the competitive diversity in the domestic retail marketplace and capital-raising for small and mid-sized businesses in public and private markets.” 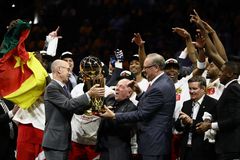 Follow Jeffrey Jones, Niall McGee on Twitter @the_Jeff_Jones @niallcmcgee
Report an error Editorial code of conduct
Due to technical reasons, we have temporarily removed commenting from our articles. We hope to have this fixed soon. Thank you for your patience. If you are looking to give feedback on our new site, please send it along to feedback@globeandmail.com. If you want to write a letter to the editor, please forward to letters@globeandmail.com.
Comments