Three years ago, Ontario Teachers’ Pension Plan appeared stuck with a bad investment. Its buyout of apparel brand Helly Hansen had all the hallmarks of a private equity deal gone sour.

Thursday’s sale of the business for $985-million to Canadian Tire Corp. ends a chapter in a good turnaround story – a story that proves strategy and management can make all the difference.

The Toronto-based pension plan bought more than 70 per cent of Helly Hansen in 2012 for a reported US$326-million, touting the company’s long heritage and clear vision for growth. Within months, that vision turned cloudy. The business soon broke its debt covenants, and according to reports, was burning cash.

Frustrated, in 2015 Teachers bought out the minority stake still held by a private equity firm and recruited a new chief executive, Paul Stoneham. A former leader at Colgate-Palmolive, the Burlington, Ont., native had most recently fixed the hairstyling product brand GHD when he arrived at Helly.

“The big thought was, how do you take the principles and dynamics of a consumer goods company like Procter & Gamble and take those brand principles and apply it to the apparel world?” he said in an interview.

In the first six months, he said, “we focused single-mindedly on cash.” When he became CEO, Helly Hansen’s net working capital was 52 per cent of sales, an incredibly high number in the consumer products business. It meant the company had a huge amount of capital tied up in inventory. To immediately raise cash and protect the balance sheet, he sold off much of it.

The first year was all triage. “You surgically cut away the bad stuff to have a healthy patient,” he explained.

In year two, Mr. Stoneham unveiled his growth strategy – and it involved shrinking. “The business had become quite spread,” he explained – too many markets, too many products. The new vision involved slashing 25 per cent of Helly Hansen’s product lineup.

After slashing, Helly Hansen was ready to expand again, but only in targeted areas. He described it as “focused customers, countries and products.”

Of these countries, the United States was the most important to fix: Helly Hansen had not made money there in close to three decades, Mr. Stoneham said.

“For a lot of Europeans, the U.S. is the sexy place to go,” Mr. Stoneham said. “The challenge is that you can’t do one size fits all. It’s certainly not one country – it’s a segment of regions.”

He attributes problems there to being a “sales-led organization, not a consumer-led organization,” and by pushing product into stores such as Macy’s, where the brand isn’t given much love. Macy’s “is a place where brands go to die.”

Mr. Stoneham replaced the U.S. sales team and, in 2016, Helly Hansen made money in the United States for its first time ever.

As the business began to improve, Helly Hansen had to turn down takeover offers every month, Mr. Stoneham said. “I was not ready to sell the business,” he said.

That, however, was Teachers’ call. The pension fund declined to comment on Thursday, but in a recent interview, Jo Taylor, senior managing director of international who has helped oversee the investment, acknowledged that there had been a lot of work done to retool the company. “And a big part of the feature when we invested on the thesis was – beyond the fantastic Canadian base the business has – also helping them be more effective in the U.S.,” he said.

Teachers appears to have received a good price: about 20 times Helly Hansen’s earnings before interest, taxes, depreciation and amortization. (Canadian Tire shares fell more than 5 per cent on the news.) Asked to justify the price on Thursday, Canadian Tire CEO Stephen Wetmore said the business has a lot more room to grow, and he’s keeping the Helly Hansen team as is.

The good news for Mr. Stoneham: There’s still time to see his strategy through. 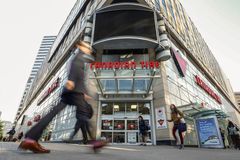