For Ontario NDP Leader Andrea Horwath, it was the perfect opportunity to capitalize on anger over the province’s hydro rates − an issue that has riled voters like few others.

Instead of offering something sensible, she proposed to buy back Hydro One.

Early in the campaign for Ontario’s June 7 election, Progressive Conservative Party Leader Doug Ford came flying out of the gates, announcing he would fire the head of Hydro One, the electrical transmission utility the provincial Liberals privatized in 2015. In the same breath, he vowed to replace the company’s board of directors.

The problem with this plan: Ontario’s premier cannot replace the utility’s chief executive officer, and the threat of political tampering hurt Hydro One’s publicly traded shares – almost half of which the province still holds.

After this blunder, Ms. Horwath had the chance to come forward with a logical and pragmatic plan. She did not succeed.

The very rationale for her pledge to buy back the utility is flawed. Ms. Horwath likes to tell horror stories of Ontarians who have suffered from skyrocketing hydro rates, such as the one from Scarborough, Ont., who is quoted in the NDP campaign platform saying “the sell-off of Hydro One has meant that my hydro bills have gotten out of control.”

The trouble is that privatizing the utility has almost nothing to do with hydro rates. To raise prices, the company must apply to the Ontario Energy Board, an independent regulator.

And Ms. Horwarth has only half an answer for how she would pull off such a feat.

Ontario has already sold 53 per cent of Hydro One, which brought in about $9-billion. Buying this majority stake back would cost even more, because it would likely require paying a standard takeover premium of 30 per cent.

And where would this money come from? The NDP says it could use the dividends the utility pays to the province every quarter. Which sounds nice, because it means Ontario could repurchase the utility without adding any debt.

But it does not really make much sense. These dividends help finance the province’s annual spending. Stockpiling them to buy back shares bit by bit would lead to a budget shortfall, or new debt would need to be added every year to make up for the financial hole.

Just like Mr. Ford, Ms. Horwath also does not seem to understand − or is unwilling to accept − that Hydro One is now predominately owned by institutional shareholders. These are big, sophisticated money managers, and the last thing they want is political interference.

In fact, the mere threat of it has already spooked some of them, sending Hydro One’s shares down 12 per cent since the start of the year, while the S&P 500 utility index has fallen only 5 per cent. “The weakness is attributable to persistent political noise in the Ontario election,” Neil Kalton of Wells Fargo wrote in a note to clients this month.

Ms. Horwath also seems to have forgotten that Hydro One is buying U.S. utility Avista Corp. for $4.4-billion. That deal is expected to close this summer, but is waiting on regulatory approvals south of the border.

Should it go through, buying back Hydro One would mean the Ontario government would also become the owner of a U.S. utility, or would have to spin off an asset it just paid a 24-per-cent premium to acquire.

And of course, there’s the worst-case scenario. With all this political noise, U.S. regulators might block the takeover, leaving Hydro One standing alone as the North American power industry consolidates around it.

Asked about these issues by The Globe and Mail’s editorial board, Ms. Horwath did what most politicians do: She pivoted to campaign lines. On how she would pay for the purchase, she quickly noted that “folks are finding it hard to make ends meet.” Not exactly a real answer.

In the early days of the campaign, no one seemed to mind. But now she is one of the front runners. Billions of dollars, and Ontario’s credibility on the global stage, are on the line.

Opinion
For Corporate Canada, Ontario’s NDP is one more thing to worry about
Subscriber content
May 27, 2018 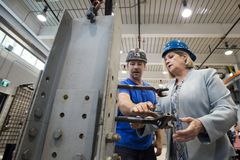 Horwath under tougher scrutiny as Ontario’s NDP gains in polls
May 23, 2018 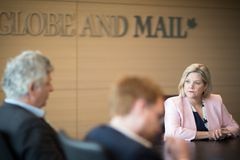 Opinion
When it comes to proposed Hydro One solutions, voters must choose between three poor options
Subscriber content
May 15, 2018 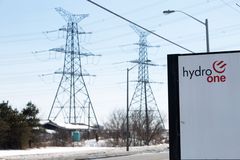