Apple Inc on Tuesday reported resilient iPhone sales in the face of waning global demand and promised $100-billion in additional stock buybacks, reassuring investors that its decade-old smartphone invention had life in it yet.

Apple’s quarterly results topped Wall Street forecasts, which dropped ahead of the report on growing concern over the iPhone. The Cupertino, California-based company also was more optimistic about the current quarter than most financial analysts, driving shares up 3.6 per cent to $175.25 after hours.

Suppliers around the globe had warned of smartphone weakness, playing into fears that the company known for popularizing personal computers, tablets and smartphones had become too reliant on the iPhone.

Sales of 52.2 million iPhones against a Wall Street target of 52.3 million was a comfort and up from 50.7 million last year, according to data from Thomson Reuters I/B/E/S.

Apple bought $23.5-billion of stock in the March quarter, and said it planned to hike its dividend 16 per cent, compared with a 10.5 per cent increase last year. Analysts believe the heavy emphasis on buybacks will bolster share prices, but some investors wished Apple had found different uses for the cash.

“I’d hoped for more on the dividend side or maybe a strategic investment,” said Hal Eddins, chief economist for Apple shareholder Capital Investment Counsel. “I assume Apple can’t find a strategic investment at the current prices that will move the needle for them. The $100-billion buyback is good for right now but it’s not exactly looking to the future.”

The cash Apple earmarked for stock buybacks is about twice the $50-billion market capitalization of electric car maker Tesla Inc.

Apple posted revenue for its March quarter of $61.1-billion, up from $52.9-billion last year. Wall Street expected $60.8-billion, according to Thomson Reuters I/B/E/S.

Average selling prices for iPhones were $728, compared with Wall Street expectations of $742. The figure is up more than 10 per cent from $655 a year ago, suggesting Apple’s iPhone X, which starts at $999, has helped boost prices.

Analysts had feared the high price was muting demand for the iPhone X, but Apple Chief Executive Tim Cook said it was the most popular iPhone model every week in the March quarter.

“This is the first cycle that we’ve ever had where the top of the line iPhone model has also been the most popular,” Cook said during the company’s earnings call.

“It’s one of those things like when a team wins the Super Bowl, maybe you want them to win by a few more points. But it’s a Super Bowl winner and that’s how we feel about it.”

The iPhone X has shaped up to be “a good, not a great product. There was a time prior to its introduction that investors expected it to be a great product,” said Thomas Forte, an analyst with D.A. Davidson Companies.

“Now that we know it is a good product, as investors have lowered expectations, that is enough, in my view, for shares to go higher from current levels.”

Skyworks Solutions Inc rose 2.9 per cent, Broadcom Inc was up 2 per cent, while Cirrus Logic gained 4.3 per cent.

Apple also predicted revenue of $51.5-billion to $53.5-billion in the June quarter, ahead of the $51.6-billion Wall Street expected as of Monday evening, and the share repurchases in the March quarter drove Apple’s cash net of debt down slightly to $145-billion.

“We are returning the cash to investors as we have promised,” Chief Financial Officer Luca Maestri told Reuters in an interview.

Apple’s services business, which includes Apple Music, the App Store and iCloud, posted $9.1-billion in revenue compared with expectations of $8.3-billion. Heading into earnings, investors were hopeful that growth in that segment could help offset the cooling global smartphone market.

Julie Ask, an analyst with Forrester, said Apple’s services segment results were positive but warned that Apple needed to continue to boost subscriptions on its platforms, which reached 270 million users in the March quarter and includes people who subscribe to third-party apps on the iPhone as well as Apple’s own services like iCloud.

“Apps are carrying most (services revenue) right now, but Apple needs to get to a place where it’s mostly subscriptions and monthly fees and not just one-off downloads,” Ask said.

Apple traditionally updates its share buyback and dividend program each spring, and the $100-billion it added this year compares with an increase of $50-billion last year.

In February, Apple said it planned to draw down its excess cash, although Cook had downplayed the possibility of a special dividend.

But investors have had concerns around Apple because of brewing trade tensions with China.

Greater China sales rose 21 per cent from a year earlier, Apple’s best growth rate there in 10 quarters, to $13.0-billion. While there has not yet been a tariff on devices such as Apple’s iPhone, Cook travelled last week to Washington to meet with U.S. President Donald Trump at the White House to discuss trade matters.

“China only wins if the U.S. wins and the U.S. only wins if China wins,” Cook said on the call, when asked about a possible trade war. “I’m a big believer that the two countries together can both win and grow the pie, not just allocate it differently,” he said.

Apple has been emphasizing its contributions to the U.S. economy in recent months, outlining a $30-billion U.S. spending plan and highlighting the tens of billions of dollars it spends each year with U.S.-based suppliers.

In recent months, Apple has been emphasizing the size of its overall user base, which includes used iPhones, rather than focusing strictly on new device sales, a sign of the increasing importance of making money off users without selling them new hardware.

Facebook to play matchmaker with its first-ever dating service
May 1, 2018 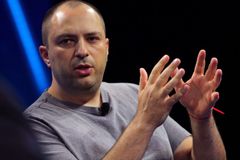 Apple results to show iPhone X problem and plan to fix it
April 30, 2018