BlackBerry Ltd. has struggled to grow revenue in its key software and services business during the pandemic, even as growth in its licensing segment buoyed its performance above analyst expectations in the past quarter.

Although total revenue for the quarter ending Aug. 31 was US$259-million, up 6 per cent from a year earlier, revenue from its key secure-data software and services fell 10 per cent to US$151-million. Revenues from its licensing-and-other segment, however, increased 42 per cent, to US$108-million.

BlackBerry moved away from the smartphone-making business over the past decade and now relies on outsourcing the brand to other hardware builders as it focuses on secure software – with a particular focus on data transmission for enterprise clients, as well as QNX, the connected-car and industrial operating system.

The company announced in August that it had licensed its brand to a Texas startup to produce a 5G smartphone for release in the first half of next year. Although executives did not name this deal as the reason for the licensing revenue boost, chief executive officer John Chen said on an analyst call Thursday that the revenue growth was from a “one-time deal” that won’t recur regularly but “will recur a number of years down the road.”

And its non-Generally Accepted Accounting Principles earnings a share of 11 US cents beat analyst consensus forecast of 2 US cents a share for BlackBerry’s second quarter of fiscal 2021. Non-GAAP revenue in the quarter was US$266-million, versus consensus of US$238-million.

Toronto-listed BlackBerry shares were volatile Thursday, down 1.09 per cent to $6.36 at the close after reaching a height of $7 twice in the morning.

BlackBerry’s software-and-services revenues haven’t seen significant quarter-over-quarter growth since the quarter that ended in November, 2019, and it has particularly struggled since the pandemic began. On the analyst call, executives said this sluggish growth was in part due to the pandemic-driven slowdown in the automotive sector, which drove demand down for its QNX connected-car software.

But Mr. Chen said on the call that he was optimistic for growth in other software segments – including Spark, its enterprise software platform that helps clients both manage and secure their organization’s many devices. Spark combines a number of individual BlackBerry services with that of the predictive security company Cylance, which it bought in late 2018 for US$1.4-billion.

Because of continued interest from clients such as the U.S. Air Force, which Mr. Chen said upgraded 90,000 users to the full Spark platform, “we are optimistic about being able to secure a significant number of further upgrades,” on top of drawing in new customers. Pandemic work-from-home measures have also boosted interest in the company’s secure-messaging and voice-call offerings, he said.

Executives also said the company was building out greater software capabilities that could up-sell existing users and was anticipating a recovery in the auto sector. While BlackBerry might see continued software-and-services revenue declines through the remainder of fiscal 2021, analyst T. Michael Walkley of Canaccord Genuity wrote in a research note, he said be believed the business line could see double-digit revenue growth in fiscal 2022.

In the prior quarter, BlackBerry took a one-time goodwill impairment charge of US$594-million due to its Spark platform after it completed the Cylance integration.

The company also faced pressure in the second quarter as a long-time shareholder pushed back against a debt-refinancing proposal. It would have seen US$605-million of convertible 3.75-per-cent debentures, set to mature this November, exchanged for new three-year-term 1.75-per-cent notes – US$500-million of which would have been held by Fairfax Financial Holdings Ltd.

BlackBerry later cut the size of the debt offering to US$365-million, limiting the number of shares Fairfax could convert. The company said Thursday that the transaction would reduce its annual interest expense by US$16-million. 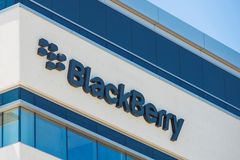 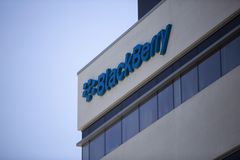