Shopify’s shares, which had gained more than 150 per cent in 2020, lost nearly 5 per cent after the company cautioned investors not to expect this year’s huge pandemic-related gains to continue.

Shopify said in a release that the pandemic has created distorting effects on the economy and that near-term demand for its services depend on external factors “that are particularly fluid” including unemployment, fiscal stimulus, consumer spending and the scope and length of the crisis.

The Ottawa commerce software provider, which has beaten forecasts consistently since going public in 2015, said it generated US$767.4-million in revenue in the third quarter ended Sept 30. That was more than US$110-million above consensus analyst expectations and up 96 per cent year-over-year, similar to its second-quarter revenue gain.

Shopify, which rarely earns a profit, posted net income of US$191-million, compared with a loss of US$72.8-million a year earlier. Financial analysts pay closer attention to adjusted net income, which at US$1.13 a share was more than double their average estimate of 49 US cents.

“While we were expecting a strong quarter, the results came in even better than our bullish expectations,” said National Bank Financial analyst Richard Tse, who had expected US$688-million in revenue and adjusted per-share earnings of 57 US cents. He said the stock likely sold off as investors locked in profits after big gains this year and because of Shopify’s cautious tone.

Credit Suisse analyst Brad Zelnick said in a note that while Shopify’s results “once again, exceed a high bar on all fronts,” he was keeping his neutral rating on the stock “given valuation and the uncertain sustainability of hyper growth.”

“The challenge with [Shopify] is weighing this sharp increase in demand – and expectations – against a quite expensive stock,” Canaccord Genuity analyst David Hynes said in a note. Mr. Hynes has cautioned investors in the past about paying too much for Shopify.

Shopify, whose software platform enables merchants to sell their wares and manage their businesses over the internet, became Canada’s most valuable company this year as consumers increasingly shopped online and merchants turned to the internet to make a living amid widespread shutdowns.

Chief executive Tobi Lutke early on instructed staff to “delete all plans” and focus on new initiatives to help merchants through the crisis. Shopify introduced new features on its platform to facilitate curbside pickup and delivery options for physical retailers, expanded cash advances to merchants and partnered with the federal government for support programs to help small businesses get online. Shopify also introduced a consumer-focused app to drive more buyers to its merchants, deepening its rivalry with Amazon.com Inc. by offering its first central marketplace.

Its efforts have paid off as more merchants joined the platform and increased the amount they pay to use its software and services, while gross merchandise volume (GMV), the sum of goods and services purchased through Shopify-enabled stores, more than doubled to US$30.9-billion over last year’s third-quarter.

Analysts had expected GMV to subside from second-quarter levels, as has happened with similar companies, but instead it expanded by 3 per cent. The “key from here will be sustainability of demand from newly acquired merchants,” Citi analyst Walter Pritchard said in a note.

Other aspects of Shopify’s business continued to perform well, including its Shopify Plus offering, which is targeted at established retailers and brands. Shopify added Dior, BCBG Max Azria, Telefonica and Beyond Meat as customers in the quarter. Shopify has also continued to expand partnerships with other online marketplaces such as Walmart.com and popular social-media platforms to give its merchants more places to advertise their wares. This week, it announced a partnership with the popular youth-oriented short-video site TikTok.

Shopify is now gearing up for the busy U.S. Thanksgiving’s Black Friday-to-Cyber Monday shopping period, which some observers have warned could be marred this year by supply chain bottlenecks and delivery issues as more people shift their holiday buying online. Shopify president Harley Finkelstein said his company was advising clients to warn customers of possible delays.

Meanwhile, Shopify is sitting on a US$6.1-billion war chest of cash, cash equivalents and marketable securities after twice capitalizing on its soaring share price by selling securities this year.

When pressed by an analyst during Wednesday’s earnings conference call about why Shopify hadn’t spent more of its cash to fortify its competitive position, Mr. Lutke said, “We will use it.” He said Shopify would focus on buying companies that help accelerate plans to add features and products, rather than acquiring revenue-generating companies just to bulk up its size. 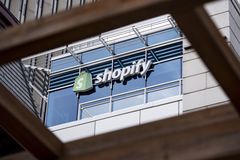 Shopify to partner with TikTok in bid to woo more merchants to site
Subscriber content
October 27, 2020

How small businesses are embracing the rapid shift to e-commerce
October 26, 2020 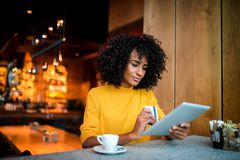