Uber Technologies Inc. plans to invest as much as $200-million in Toronto engineering talent as the company aims to recast itself from ride-hailing app to one-stop mobility shop, getting options such as electric bikes and expanded carpool choices more quickly to the public.

The San Francisco company first put research-and-development roots in the city in 2017, when it nabbed prominent University of Toronto artificial-intelligence academic Raquel Urtasun to lead its first non-U.S. self-driving centre. Praising Toronto’s tech and artificial-intelligence talent, Uber chief executive Dara Khosrowshahi said on Thursday the company would expand Ms. Urtasun’s group and open an additional engineering lab next year that would focus on making Uber’s updates public faster. It expects to employ more than 500 people in Toronto, up from 200 today.

Mr. Khosrowshahi spent the day touring Toronto, visiting the MaRS Discovery District entrepreneurship centre and the region’s Board of Trade. It was his first trip to the city Canada since becoming Uber’s CEO after beleaguered co-founder Travis Kalanick left the post in June, 2017. As he took the reins at the nine-year-old company, Mr. Khosrowshahi inherited a scandal-plagued brand under immense pressure, after accusations of harbouring a toxic culture that included sexual-harassment allegations, as well as legal disputes over autonomous-vehicle technology and alleged investor fraud.

In a wide-ranging interview with The Globe and Mail’s editorial board on Thursday, Mr. Khosrowshahi said the company, armed with a refreshed executive team, has redoubled its focus on being a “force for good" as it clears past skeletons from its closet.

“Our actions today … represent the ethos of the company, which is to do the right things," Mr. Khosrowshahi said. "I don’t know if there are other skeletons I’m not aware of – you never know until you know – but what I can control is: What does the company represent? How are we acting now? And I think we’re acting in an honourable way.”

But roadblocks remain in Uber’s effort to take market share across all forms of urban mobility, with aims to go public by late 2019. That burden includes a death from Uber technology, when earlier this year, Arizona pedestrian Elaine Herzberg was killed by one of the company’s test vehicles in autonomous mode.

In response, Mr. Khosrowshahi said, Uber has deepened its investment in simulation technology and focused more on track testing, which he believes will “make for a fundamentally safer test methodology.” After pulling all of its autonomous cars off the road following Ms. Herzberg’s death, including in Toronto, the company plans to resume its on-road testing this year. Still, the CEO said he believes it will be at least 10 years before human-free vehicles will be able to take to the road freely.

Until then, Uber is focused on pitching itself as a strong reason to ditch personal cars. First, there was taxi-like UberX rides, where drivers use their own cars, then the carpooling option, Uber Pool. And, beginning Thursday, Toronto riders have access to Uber Express Pool, which uses more carpool-style routes with the caveat that riders must walk up to 250 metres to pickup points, and from drop-off points, to make the driving route more efficient. In San Francisco, meanwhile, Uber users can even hail electric bikes and the company has invested in an electric scooter firm.

Engineers at the new Toronto lab, Mr. Khosrowshahi said, will work on developing and implementing more of these features.

By offering increasingly cheaper options, such as the new Express Pool, Uber has begun encroaching on the territory of public transit. Uber has insisted that it simply wants to complement public transit systems – Mr. Khosrowshahi repeatedly suggested Thursday that they could even integrate trip planning into the Uber app, working with public systems like the Toronto Transit Commission. In Innisfil, Ont., near Barrie, Uber already provides the role of public transit. The city subsidizes its citizens' rides, arguing it’s cheaper than a traditional bus system.

Asked whether Uber might damage public systems in cities and make transportation less affordable for lower-income citizens, Mr. Khosrowshahi said no. “We want to work with public transit in order to route users to public transit in the right circumstances,” he said. In fact, he said, he’d like to see Uber data help design city transportation networks of the future.

“What we’re looking to do is have a platform technology where we are presenting every mode of transportation in an equal and unbiased way for the user. Ultimately, we think that’ll make us a better service over a period of time.”

Uber still has an uphill battle for investors: It lost US$891-million last quarter. But that was down from US$1.1-billion a year earlier. The CEO said that finding a path to profitability is its priority, and that the margin from its rides has improved. But the company is fanning out, including investing in the freight business, which it launched last year to match carriers and shippers. While that’s only a “single digit” part of Uber’s business now, Mr. Khosrowshahi said that “the U.S. freight business is a $700-billion market, and we would like to, over a long period of time, be a part of that.”

And then there’s the self-driving car technology that drew Uber to Toronto in the first place. The lab here, led by Ms. Urtasun, is a focal point for the company’s artificial-intelligence research. Toronto and its namesake university have established themselves as world-renowned centres for AI research, and Uber is among many foreign-headquartered tech companies that have flocked to the city in recent years to tap into it.

Uber hopes its research here will help the AI-powered cars of the future make safe, efficient decisions – and further weave the company into the fabric of urban mobility. But for many years to come, Mr. Khosrowshahi believes his fleet will still be driven by humans. “The most efficient system is humans and machines working together.”

ON THE PATH TO PROFITABILITY

ON THE PEDESTRIAN DEATH IN ARIZONA

ON THE FUTURE OF DRIVERLESS CARS

“The most efficient system is humans and machines working together. The future that I see is that if there’s a very simple route, [with] no traffic jams … no unprotected left turns, maybe not in a city centre where people are double-parking - that route might be served by machine. But I think that anything more complex, for a long period of time … That kind of a drop-off or pickup is going to require people. The reason why we’re very interested in developing self-driving technology within Uber, because we’re also going to use third-party self-driving technology, is because I actually very much believe in the human-machine hybrid. It’s a better product.”

“We have a lot to do at the company, and for me that activity started with the culture and the management of the company. … To some extent, we had grown too fast, and we had grown in a way that didn’t necessarily take into account the input and dialogue that’s necessary for companies like ours to be good citizens of the cities in which we operate and the regulators with which we work. So for me, job No. 1 was about culture and leadership of the company.” 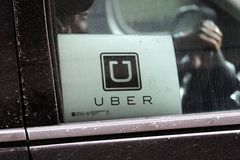 Connecting with strangers while riding with Uber Pool
September 13, 2018 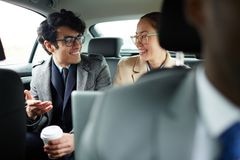 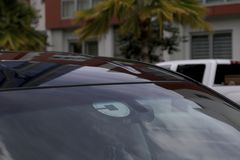