BlackBerry Ltd. has hit an inevitable milestone in its transformation to a secure enterprise data-transmission company: It recorded negligible handset revenue in its latest quarter.

The smartphone pioneer – knocked from its historic perch over the past decade as Apple Inc.’s iPhones and Alphabet Inc.’s Android OS-powered devices took over the market – has spent the past five years under chief executive John Chen undergoing a company-wide strategic shift. BlackBerry now focuses on security for the “enterprise of things,” using its reputation as a secure smartphone leader to focus on securing data transmission across the ever-expanding number of connected devices in large organizations and in vehicles.

While BlackBerry recorded US$62-million in quarterly handheld-device revenue in the same period two years ago, and US$9-million in last year’s fiscal third quarter, handsets did not factor into BlackBerry’s reported revenue for the quarter ended Nov. 30.

The company’s total revenue was flat at US$226-million, held up by growth in its “technology solutions” segment, which includes its connected-car QNX software, and through licensing and intellectual property (IP). But even while BlackBerry’s handset legacy lives on by licensing the brand to other manufacturers – such as TCL Corp.’s BlackBerry KEY2 – the licensing revenue is buoyed by BlackBerry’s broader IP licensing.

The company announced in 2016 that it would stop making its own phones. “The volume game [in smartphones] is almost suicidal,” Mr. Chen told The Globe at the time, having sold only 400,000 phones in the most recent quarter. By contrast, in its fiscal 2011 year, the company then known as Research in Motion shipped a record 52 million smartphones, helping deliver US$20-billion in revenue, another record.

After it stopped manufacturing its own handsets, Mr. Chen said in 2016, the company would concentrate on software: “[It’s] more about the smart of the smartphone, not the phone.” (The company did not immediately respond to a query about where handset revenue has come from since 2016.)

The company began reporting its present revenue segments, including enterprise software-and-services and technology solutions, in mid-2017, at which point it reported handset revenue of US$152-million for the quarter ending in May, 2016.

On an analyst conference call on Thursday morning, Mr. Chen said that a recent legal settlement with Nokia Corp. contributed to the IP revenue boost this quarter. BlackBerry’s licensing, IP and “other” revenue stream brought in US$68-million for the quarter, up 36 per cent from US$50-million a year ago more than double its US$30-million value for the same quarter in 2016.

Investors now tend to key into BlackBerry’s enterprise software and services income for signs of success in its Mr. Chen-led turnaround. The past few quarters have delivered mixed results, in part because of a shift to a new standard for sales reporting and accounting practices – called ASC 606, which accounts for certain enterprise licensing revenue over the life of contracts, rather than recognizing it up front. The shift shocked investors two quarters ago, as enterprise revenue fell by nearly a fifth from the year prior; as it stabilized in the previous quarter, investors sent the stock up nearly 12 per cent.

Enterprise software and services revenue fell 1 per cent to US$96-million in the most recent quarter, the company’s third of fiscal 2019. “If we were to account for the third quarter of last year under ASC 606 in the same way this fiscal year, on that basis, enterprise software and services revenue would have experienced approximately 6-per-cent growth year over year this quarter,” chief financial officer Steven Capelli said on the analyst call. Analyst Tim Long of Bank of Montreal Capital Markets said this week that he expects the accounting change to smooth out revenue over time, but still warned of bumpy near-term quarters.

The share price rose more than 5 per cent to US$7.74 just after markets opened on the New York Stock Exchange, with results above analyst expectations. This includes total non-generally accepted-accounting-principles revenue of US$228-million, which beat the analyst consensus estimate of US$214-million.

The company posted a profit of US$59-million, which translated to a profit of 11 US cents a basic share and a loss of 1 US cent a diluted share. That’s compared with a total loss of US$275-million a year earlier, which was in large part the result of a one-time payment to Nokia as part of the companies’ dispute.

The company made its biggest acquisition ever in November as it bought the California artificial-intelligence firm Cylance Inc. for US$1.4-billion. Cylance claims it can determine cybersecurity threats an average of 25 months before they become public knowledge; it will operate as an independent business unit within BlackBerry. “These cybersecurity capabilities will fit nicely with everything we do,” Mr. Chen said on the conference call on Thursday, noting that more details on how it will fit into BlackBerry will be revealed at an analyst meeting in April. 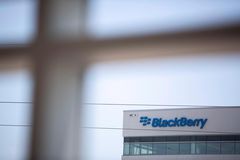 Before the Bell: What every Canadian investor needs to know today
Subscriber content
December 20, 2018 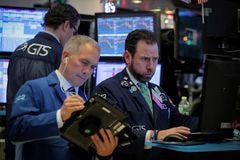 The Canadian dollar and the price at the gas pump: Why you can’t win for losing
Subscriber content
December 20, 2018