Scientists combing the cosmos for signs of heavy things going bump in the night have recorded their biggest bang yet.

In this case, two black holes – one 85 times the mass of our sun and the other 66 times – merged in an instant to form one much larger black hole equal to 142 suns, researchers involved in the detection revealed Wednesday.

For those quick with arithmetic, that leaves the equivalent of about nine suns unaccounted for. Scientists say most of that mass was converted directly into gravitational energy that caused the space around the black holes to stretch and heave like a stormy sea. And though the collision occurred a staggering 5.3 billion light-years away, the vibrations were strong enough to rattle sensors here on Earth.

The announcement coincides with the release of scientific papers describing the event in detail. The detection was actually made on May 21, 2019, during the third run of the international physics experiment known as the LIGO-Virgo collaboration.

The experiment consists of three enormous detectors – two in the United States and one in Europe – each using an elaborate mechanism for bouncing laser light back and forth from suspended mirrors positioned kilometres apart. These are used to sense passing ripples in the composition of space called gravitational waves. While the existence of such waves was posited more than a century ago by Albert Einstein, the ability to detect them emanating from remote celestial collisions is barely five years old.

The collaboration’s latest find is significant for several reasons. Not only was the event the largest and most distant emitter of gravitational waves ever detected, it verifies the existence of a new class of objects known as intermediate-mass black holes. The result is likely to spur a host of new questions about how these black holes form and what it says about the evolution of the universe and the laws of physics.

“This is a huge discovery in that it’s the first conclusive observation in any medium of intermediate-mass black holes,” said Jess McIver, an assistant professor at the University of British Columbia and a member of the collaboration.

The term “black hole” describes any object whose gravity is so strong that not even light can escape its pull. In theory, black holes can be any size, but astronomers have only found evidence of two distinct types.

The smaller variety, formed when a giant star runs out of fuel and collapses in on itself, is thought to range from a few times to a few dozen times the mass of our sun. There is already ample evidence of this type, including initial detections by LIGO (the Laser Interferometer Gravitational-Wave Observatory) in 2015. (The Virgo detector came online in 2017.)

At the other end of the size spectrum are supermassive black holes, which contain billions of times the sun’s mass. These are located at the cores of galaxies, where they feed on infalling gas. In 2018, one of the largest and nearest was captured in an image by the Event Horizon Telescope.

What had not been established until now was the existence of black holes of intermediate size – approximately 100 to 1,000 times the sun’s mass. That is too small to be associated with the central concentration of mass in a galaxy but too large to form through the collapse of a single star.

The new find shows that these black holes exist and hints at how they may form. One scenario is that they grow in hierarchical fashion from earlier collisions of smaller black holes. That would allow them to cross a theoretical barrier known as the “mass gap,” which puts a limit on the size of black holes formed from the collapse of a single star.

The larger of the two black holes that collided and triggered the LIGO-Virgo detection was already in the mass gap, suggesting it may have been the byproduct of an earlier merger.

“In a way it’s kind of an evolutionary missing link,” Dr. McIver said. She added that intermediate-mass black holes may turn out to be a step on the way to producing supermassive black holes like those found at the centres of galaxies.

The LIGO-Virgo detection consisted of gravitational waves at the lower end of the experiment’s frequency range, where cosmic vibrations are most easily disguised by detector noise. Dr. McIver said that future upgrades to LIGO-Virgo will likely lead to more intermediate-mass black holes turning up in the data, providing additional information about the roles these objects play.

Ghazal Geshnizjani, a theoretical cosmologist at the Perimeter Institute for Theoretical Physics in Waterloo, Ont. – who is not part of the collaboration – said the extraordinary distance of the collision means such events can be used to probe earlier eras in cosmic history. Because gravitational waves travel at the speed of light, the collision is thought to have occurred more than five billion years ago, when the universe was just over half its current age.

As more events accumulate, they may reveal key details about the evolution and distribution of matter at that time, which in turn can be used to refine ideas about how the universe originated. And because gravitational waves differ from light and other forms of electromagnetic energy, they can be used as an independent measure of the expansion of space after the Big Bang. Dr. Geshnizjani added that further detections have the potential to resolve a continuing debate about the true age of the universe.

“The more they see, the better we can do cosmology,” she said.

Dr. McIver said the specific features of the signal, which the detectors perceived for a mere tenth of a second, also provided team members with one of the most extreme challenges to date of Einstein’s general theory of relativity. Scientists are constantly in search of ways to test the theory to see if it holds up in conditions far more extreme than Einstein could have anticipated.

“We have found that general relativity seems to describe the signal very well,” Dr. McIver said.

In other words, Einstein wins again. 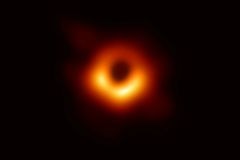 This is what a black hole looks like: Researchers photograph an abyss larger than our solar system
April 10, 2019 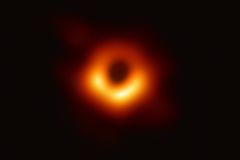 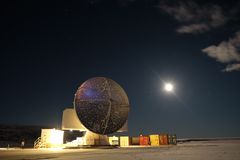