For more than six years, an army of citizen scientists across Canada has been scouring gardens, trails and vacant lots, in search of butterflies. Their observations have poured in by the tens of thousands, arriving at an online repository known as eButterfly, where researchers sort and sift through a growing mountain of reports and photos to see if they say something interesting about the colourful, winged insects.

Now the verdict is in, and it turns out that those myriad butterflies have something interesting to say about humans. Namely, when amateur zeal is combined with professional-level expertise, the result is a richer and deeper picture of the natural world.

“It shows that we can discover things that we would not have known before,” said Jeremy Kerr, a professor of biology at the University of Ottawa who specializes in macroecology – the science that takes a big picture view on species and biodiversity.

The eButterfly results, recently summarized by Dr. Kerr’s team in the journal Global Change Biology, include five species of butterflies identified by amateur observers that were not previously recorded in Canada. Dozens of other species were shown to be more extensive in their distribution than could be determined from professional research alone. Across the country, observations collected by amateurs reveal that there are about three more species of butterfly per square kilometre than would have been predicted otherwise.

When combined with professionally gathered data, the citizen-science contributions measurably improve scientists’ understanding of the extent, timing and richness of butterfly life in Canada. This is important: Because butterflies are more visible than most other insect species, they act as sentinels that can reveal how ecosystems across the country are responding to land-use trends and climate change.

But the broader message in the study is that the creators of eButterfly now have some hard numbers they can use to quantify the value of citizen science.

“This will make an enormous difference,” said Maxim Larriveé, head of collections and research at the Montreal Insectarium. He launched eButterfly in 2012 while working in Dr. Kerr’s lab but was not directly involved in the new study.

“I knew that citizen science was providing novel information. But to see the extent of it and the way they demonstrated it is impressive,” he said.

While academics generally applaud the idea of the public pitching in as a way to generate enthusiasm for their work, the extent to which the data gathered by non-experts are actually useful is a matter of continued debate. The challenge with including amateur observations, said Peter Soroye, a graduate student at the University of Ottawa who performed the analysis, is that ecological data of any kind are inherently “noisy.” Long-term trends are often hard to separate from the randomness of living systems doing their thing. So, he wondered, when sightings by citizen scientists are thrown into the mix, “does that help clarify the noise or just add to it?”

To find out, Mr. Soroye started with more than 100,000 individual butterfly sightings in Canada submitted by amateur observers to eButterfly. He also looked at a similarly large trove of professional data drawn from more than a century of research collections at museums across the country.

In comparing the two, Mr. Soroye said he was surprised to find how well they were in agreement. Out of 312 butterfly species, the two groups had overlapping records for 265. And while the amateur observations are not gathered in a systematic way and are typically clustered in places where people tend to be, their sheer volume lends them enough statistical weight to be scientifically relevant.

But the “real magic” said Dr. Kerr, is what happened when the professional and amateur data were combined and used to create a Canada-wide map that predicts relative species abundance for butterflies from the U.S. border all the way to the High Arctic based on temperature and other environmental factors. The result shows that the citizen science data add a level of detail to the picture that scientists alone would not be able to achieve. 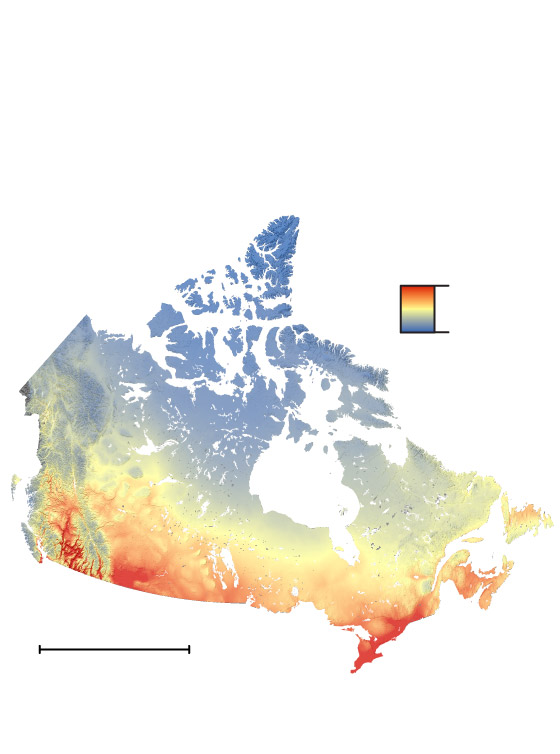 The distribution of 265 butterfly species across

Canada is revealed by combining professional

indicate where the highest numbers of butterfly

species per square kilometre are concentrated. 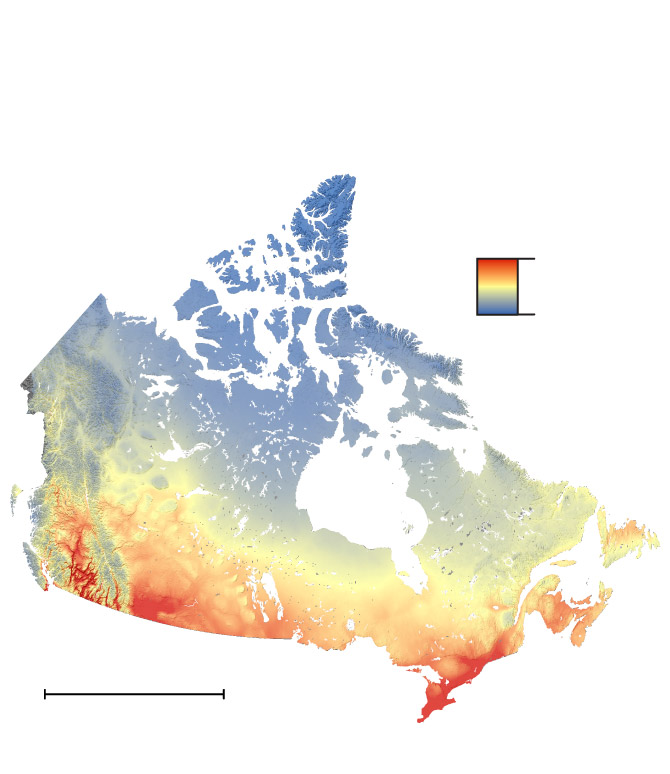 The distribution of 265 butterfly species across Canada

is revealed by combining professional and citizen science

data. The reddest areas indicate where the highest 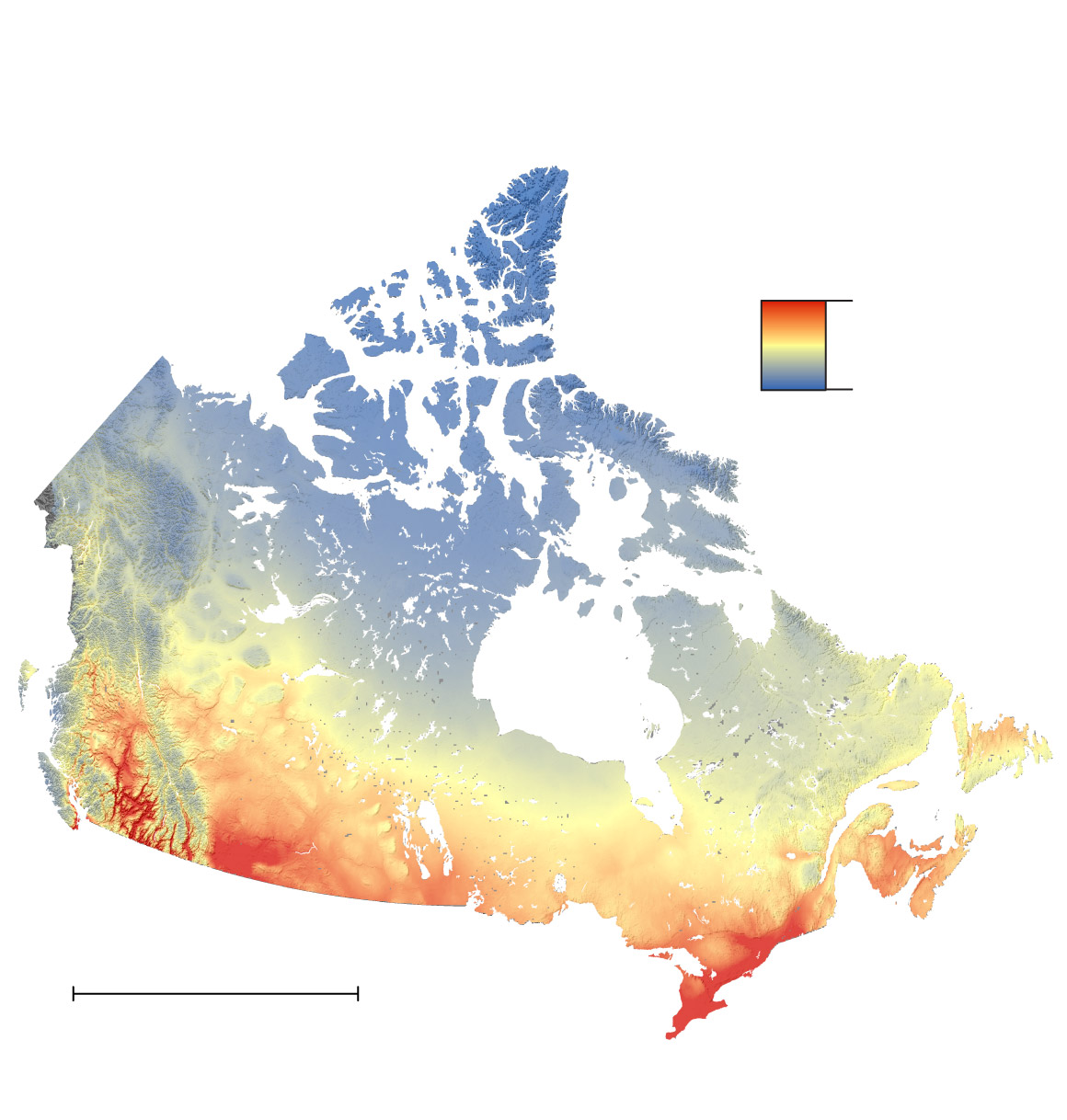 and citizen science data. The reddest areas indicate where the highest numbers

of butterfly species per square kilometre are concentrated.

“This is not something we can do ourselves,” Dr. Kerr said. “There just aren’t enough scientists out there.”

The idea of using the internet to collect amateur records of species sightings goes back at least 14 years when Cornell University launched eBird, now a global effort. Birders, many of whom are expert hobbyists who go to great lengths in search of rare species, were an obvious starting point for scientists looking to leverage the possibilities of crowdsourcing.

The secret to eButterfly’s success is not just the number of observations it has accumulated (now outnumbering all of the butterfly records ever gathered by biologists in Canada going back to the 19th century) but in the way those observations are vetted to screen out errors.

That job falls to a handful of expert “validators” who review the observations and photos to ensure they are plausible.

“I say no to quite a few,” said Ross Layberry, who handles all the observations coming in from Ontario, Quebec and Manitoba. As of this week, Mr. Layberry said, he has looked at 110,250 individual butterfly sightings from citizen scientists.

Technically an amateur himself, Mr. Layberry said he has been enamoured with butterflies since he was in his “larval stage” growing up in England. When he immigrated to the Ottawa area in 1962, he was soon learning how to identify the much larger suite of North American species he could find there, while developing a personal collection with more than 1,000 specimens. In 1998 he co-authored the definitive Butterflies of Canada.

Now 78, Mr. Layberry says he typically spends a few hours per week going through his share of the observations that come to eButterfly, helping to make sure that reported species are identified correctly. Already an expert, he says the project has honed his abilities to distinguish between closely related species, such as the Atlantis Fritillary and the Aphrodite Fritillary, which look identical except for eye colour.

While the University of Ottawa study focused only on Canadian observations made during eButterfly’s first three years, the project has since expanded to include reports from citizen scientists in the U.S. Wayne Thogmartin, an ecologist with the United States Geological Survey, based in Wisconsin, said that he has been able to use the data for his own research tracking Monarch butterfly migration patterns.

Dr. Thogmartin added that citizen science data, on their own, come with idiosyncrasies that scientists need to take into account. For example, amateurs with an interest in spotting butterflies tend to go where the butterflies are most easily found, rather than where they are marginal and may be disappearing. That bias can disguise species declines.

Nevertheless, Dr. Thogmartin said, the power of eButterfly is “that if we collect enough information over a broad enough area, there’s still the potential to understand broad patterns in species occurrence.”

Kent McFarland, a conservation biologist with the Vermont Center for Ecostudies has been working with eButterfly since 2014. He said the database is only now hitting an inflection point where the flow of incoming data is revealing its true potential.

He is especially keen to see the project extended farther south into Central America, where butterfly species richness soars in relation to northern climates and where information is lacking.

Mr. Soroye said the most important outcome of his analysis is learning how best to use professional and citizen science data in combination to advance knowledge and to track shifts in species that can inform policy makers.

“There are strengths in both approaches,” he said. “It’s when you put them together that you really get the best picture.”

As climate change and human activity transform the continent at a head-spinning rate, perhaps the best hope scientists have now to document what is happening lies with citizen scientists with smartphones in hand, who can act as their eyes and take note when a butterfly alights nearby.