Albertans will vote in a referendum this fall that will ask them whether equalization – the federal program designed to level the fiscal playing field among the provinces – should be removed from the Constitution.

The referendum was a key election promise from the governing United Conservative Party and was endorsed by the province’s “fair deal” panel, which was struck to examine Alberta’s relationship with the rest of Canada. The perception that equalization unfairly benefits other parts of the country, at Alberta’s expense, is a long-held source of resentment in the province that has only grown after years of economic decline in the oil sector.

Here’s what you need to know about the referendum, how the province got here, and what the government hopes to achieve.

What will Albertans be voting for?

The referendum, which will be held alongside municipal elections in October, will ask Albertans a “Yes or No” question: “Should Section 36(2) of the Constitution Act, 1982 – Parliament and the Government of Canada’s commitment to the principle of making equalization payments – be removed from the Constitution?” There will also be a referendum question on moving permanently to daylight savings time.

What is Section 36(2) and what is equalization?

The section in the Constitution that deals with equalization is a single sentence: “Parliament and the Government of Canada are committed to the principle of making equalization payments to ensure that provincial governments have sufficient revenues to provide reasonably comparable levels of public services at reasonably comparable levels of taxation.”

The program is designed to ensure provinces can provide similar levels of service despite their different fiscal situations, and specifically their ability to raise money through taxes. That means a province like Nova Scotia, where incomes are comparatively lower than much of the rest of Canada, won’t have to choose between significantly reducing services or imposing extremely high taxes.

“The basics are really straightforward,” said Trevor Tombe, an economist at the University of Calgary. “It’s a federal program that provides support to provinces with weaker-than-average economies. They generate less income than higher-income regions like Alberta, B.C., or Ontario. It’s harder for them to raise revenue without having to resort to abnormally high taxes.”

How does the program work?

While equalization is enshrined by the Constitution, the real details are determined by the equalization formula. The last major overhaul happened in 2007 under the Conservative government of then-prime minister Stephen Harper.

The formula starts by assessing each province’s fiscal capacity, or its ability to raise money.

“What it essentially does is ask: ‘How much would a tax point raise in, say, P.E.I. versus the national average?’ ” Dr. Tombe said.

Average household incomes in P.E.I. are under $70,000, compared with nearly $100,000 in Alberta, he noted. So even if the two provinces had the same provincial tax rates, the PEI government would bring in a lot less money.

It doesn’t matter if provinces actually raise that theoretical amount of money through taxes, just that they could. Dr. Tombe said Alberta’s finances would be in much better shape if it taxed at the same level as other provinces, but the government has chosen not to.

Dr. Tombe also said that it’s virtually impossible that any changes to the formula would result in any equalization money going to Alberta as long as incomes remain so much higher than the rest of Canada.

One myth about equalization is that provinces somehow send money to the federal government or other provinces to cover the payments. But the program is funded through the federal budget, whose revenues are largely made up of income and other taxes.

Why does Alberta want to kill the program?

It’s not clear that ending equalization is really the government’s end goal, but Premier Jason Kenney argues a Yes vote in a referendum would give the province leverage to force the federal government to negotiate a new formula, constitutional change, or some other concession.

And Mr. Kenney’s main complaints aren’t even specifically about the equalization program. The Premier has railed against other provinces, notably B.C. and Quebec, that have opposed and attempted to block pipelines designed to carry Alberta crude. He has also accused the federal government of attacking his province’s oil industry with environmental legislation, such as Bill C-69, which overhauled the environmental assessment process.

The original election promise from 2019 promised a referendum only if the concerns about pipelines and environmental regulation weren’t met.

The Premier says Albertans have been happy to help the rest of Canada when times are good, but he says the federal government and other provinces shouldn’t benefit from the riches of Alberta’s oil sector while actively fighting against it.

The referendum taps into a longstanding grievance in Alberta that the province is treated unfairly by the rest of Canada. Mr. Kenney and his United Conservative Party government are targeting equalization because it has become a powerful symbol in the province, even if most people may not understand the details, said Daniel Béland, a professor at McGill University and an expert on fiscal federalism.

“For many people in Alberta, equalization is synonymous with unfairness,” he said. “It’s a program that’s quite complex and also politicians talk about it in ways that are quite misleading – sometimes intentionally, sometimes because they themselves don’t actually understand it.”

What legal power does a referendum have?

In a word, none. Under provincial legislation, such a referendum is binding on the Alberta government, which must take reasonable steps to implement the result, but legal experts say a Yes vote would have no legal power to force the federal government to do anything.

Mr. Kenney asserts that a Supreme Court of Canada reference case from 1998 that dealt with Quebec secession set a precedent that the federal government must negotiate potential constitutional amendments with a province that holds a referendum with a clear question and a clear result.

Eric Adams, a law professor at the University of Alberta, said the Constitution already gives a province the right to propose changes and that the federal government and other provinces have an obligation to “acknowledge and address” the issue. A province doesn’t need to hold a referendum to do that, though Alberta has not made any such proposal.

“[Mr. Kenney] could send a letter, he could ask for this issue to be on the next first ministers’ agenda and he would have every right and ability to do so,” he said.

And even then, it’s not clear what the federal government and other provinces are required to do other than listen, he said, or what recourse a province would have if its government believed its concerns weren’t taken seriously.

The passage in the 1998 Supreme Court decision that Mr. Kenney frequently cites, which refers to an “obligation to negotiate,” appears to be limited to referendums on separation, Dr. Adams said.

“If the Kenney thesis is correct, it means that any time any province has a referendum on any matter in the Constitution, the outcome of that referendum at the provincial level then binds all of the rest of Canada to start negotiating the change to the Constitution,” he said.

“That’s a lot of power to place in the hands of the good people of Prince Edward Island.”

Even Mr. Kenney has acknowledged that a Yes vote in the referendum wouldn’t prompt immediate change.

“I’ve always said that a Yes vote on the principle of equalization does not automatically change equalization; it doesn’t remove it from the Constitution,” he said. “What it does is to elevate Alberta’s fight for fairness to the top of the national agenda.”

Is there any downside to a referendum?

Critics of the government, including the Opposition New Democrats, have dismissed the referendum as political theatre designed to distract from the province’s very real economic problems – none of which, they say, would be helped by a vote on equalization.

Politically, there is a risk the referendum could backfire on Mr. Kenney if there is an overwhelming Yes vote with nothing to show for it, said Donna Kennedy-Glans, a former Progressive Conservative cabinet minister who was a member of the “fair deal” panel.

Ms. Kennedy-Glans said she was personally opposed to holding a referendum but that the panel recommended it because it reflected what Albertans were saying. She said she worries the referendum could do more to stoke grievances in Alberta than address them.

“Even if we all said, ‘Yes, we’d like to have this clause removed from the Constitution,’ or, ‘We’d like to renegotiate it,’ it’s not a guarantee of anything,” Ms. Kennedy-Glans said. 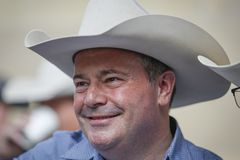