A craft brewery in central Alberta is using carbon capture technology to reduce its emissions while saving money on carbon dioxide needed to carbonate beer.

The founders of Blindman Brewing in Lacombe, north of Red Deer, are urging other craft breweries to adopt the technology, which they say will pay for itself in just a few years and could put a large dent in the industry’s environmental impact.

Blindman’s Kirk Zembal explains why his brewery wanted to adopt carbon capture and why it makes sense for his fellow brewers to follow.

What is the problem that you were trying to address?

When yeast eats sugar to ferment and create alcohol, ethanol, it also produces CO2, which is typically vented out of the tank. This is the same as breweries, wineries, distilleries – any kind of fermentation process, CO2 is vented.

It’s actually fairly simple to capture it, clean it up, compress it, store it in tanks and then reuse it. We inject CO2 into tanks to carbonate beer, and that cost us a lot of money – last year, we paid $60,000 to buy bulk CO2.

Some of the big breweries in the world have already solved this problem and capture CO2 – the big Budweiser plant in St. Louis, for example. But there are probably 10,000 craft breweries in North America and now we’re going to have the technology to do this on a small scale.

What do we know about the carbon impact of the craft beer industry?

It really depends on fermentation parameters and what style the beer you’re making [is], and because there is now only going to be a handful of us that have started to use this technology, we don’t have great data, but that’s part of the project, to gather that data.

We estimate somewhere around 100 metric tons [is produced by Blindman], which isn’t altogether a huge amount, but there are 1,100 breweries in Canada so, collectively, there’s an impact.

How does the technology work?

It hooks up to our fermentation tanks and then the CO2 that’s being vented is brought into a manifold, compressed, cleaned up through some scrubbers to get rid of any impurities, and then it’s stored in big dewar tanks. And then, when we go to carbonate beer, we then take that CO2 and inject it into our brite tanks.

It’s been a process. The first vendor we were going to use went out of business. Then we found this company in Texas that started to develop it, and now there’s a handful of them in operation in the U.S.

We also have been working with the Alberta Machine Intelligence Institute and we’re looking at developing machine learning models to help generate some data and some decisions around our CO2 production during fermentation.

What support have you received?

How long will this take to pay for itself?

It’s one of those win-win-win situations. If you have an emission reduction product that is financially viable, not outrageously complex to implement and reduces CO2 emissions, those are the ones that everybody should be jumping on.

Our brewery was founded on the ethos of doing better and providing a choice. If you’re drinking beer, you have a choice of drinking a beer from a brewery that’s cutting down their impact.

Folks that drink beer care about the world, and we care about our world. We’re trying to do what we can.

What interest have you received from other breweries?

I’ve been getting calls from breweries across the country asking, ‘How do we get one of these systems?’ And I’ve been passing them on and talking them through a few things.

As well, one of our project partners is Olds College, one of the few brewing schools in Canada. One of the reasons we partnered with them is that we want to generate all our data, including our financial results, so we can go out and say, ‘This is the information, this is the data. Make your own decision.’ We’re assuming that it will say, ‘Buy one tomorrow.’” 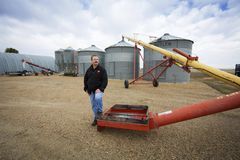 Alberta to end craft brewery tax discount, will replace with grant program
July 12, 2016
Follow James Keller on Twitter @byjameskeller
Report an error Editorial code of conduct
Due to technical reasons, we have temporarily removed commenting from our articles. We hope to have this fixed soon. Thank you for your patience. If you are looking to give feedback on our new site, please send it along to feedback@globeandmail.com. If you want to write a letter to the editor, please forward to letters@globeandmail.com.
Comments