Alberta is banking on a significant recovery in the oil patch to pull the province out of its economic doldrums, unveiling a budget with more cuts to the public service while maintaining spending on education and health care.

The province’s 2020-21 budget was far from the slash-and-burn plan feared by public-sector unions, which expected tough cuts in the face of oil-price woes and worsening economic projections. But the United Conservative government’s second budget painted a rosy picture that put it at odds with major economic-indicator projections by private forecasters.

Finance Minister Travis Toews said the province opted for “surgical” cuts rather than steep across-the-board reductions such as those from former premier Ralph Klein’s budgets in the 1990s. The budget also included a lengthy attack on Ottawa over the federal fiscal-stabilization program that emphasized Alberta’s long-term contribution to Canada’s fiscal health.

“I believe that 2020 has the potential to be a turnaround year for the economy in this province,” Mr. Toews said. “We’re seeing signals and signs at this point that our broad-based method of improving the Alberta economy is beginning to attract investment.”

Mr. Toews warned that “additional spending restraint will be required” if the province faces additional economic challenges or if expected pipelines – including Enbridge Line 3, Trans Mountain and Keystone – aren’t built.

The budget has Alberta facing a $6.8-billion deficit in the coming fiscal year. It lays out $50-billion in expenses to maintain spending on health and education, though it also continues down the path of cutting public-sector jobs by 2 per cent over four years and plans to double the number of surgeries in private clinics. Debt is expected to hit $76.9-billion, creeping up to $87.8-billion by 2022-23.

The government says it continues to be on track to balance the budget by 2022-23, a key promise from last year’s provincial election.

The budget projects a rebound in the oil patch, assuming a modest increase in per-barrel oil prices to $63 by 2022-23 and an increase in production as more pipelines come online. In all, non-renewable energy sources are expected to make up 15 per cent of Alberta’s total revenues by 2022-23, hitting $8.5-billion from the $5.1-billion forecast for 2020-21.

Unemployment is projected to hit 6.7 per cent in 2020 and shrink to 5.1 in 2023, compared with the private-sector forecast average of 7 per cent and 6.8 per cent, respectively. Similarly, the province projects Alberta’s real GDP will hit 2.5 per cent in 2020, 0.3 percentage points higher than estimates from the Conference Board of Canada released Thursday.

Thousands of public-sector workers immediately descended on the legislature building Thursday afternoon, packing the grounds in front of the building to loudly denounce the budget.

Opposition Leader Rachel Notley heavily criticized the document, saying it "offers no hope to the 50,000 Albertans who have lost their jobs since this government began on its misguided path, and in fact aims to push more public-sector workers into unemployment.”

The Surface Rights Board will get an additional $1.7-million to help it cope with the deluge of complaints by Albertans who aren’t receiving payments for oil and gas wells on their lands. The quasi-judicial board will use the cash to hire another 15 staff members and three board members to help get through a 5,000-case backlog within a year.

The government will also loan the Orphan Well Association up to $100-million to address the growing number of Alberta’s abandoned oil and gas wells. That follows a similar $235-million loan that the former NDP government granted the industry-funded body, which oversees oil and gas well cleanup.

While the oil and gas sector remains central to Alberta’s budget, the government is eyeing diversification measures including a plan to seek $1.4-billion in investment to increase agriculture and food exports. The technology sector, despite being celebrated in the budget as “a foundation of Alberta’s economy,” will see just $200-million.

The government will also this year develop a new mineral strategy that it hopes will pull in an extra $9-million in tax revenue by 2022-23. Budget documents contained no details about the strategy, but energy officials said it would be a policy-driven plan that may feature industry incentives.

The budget continues the $1.1-billion Petrochemicals Diversification Program, which backstops projects that turn ethane, methane and propane into plastics, fabrics and fertilizers.

The government says it will also share “factual information” about new oil sands projects that have “significantly lower” per-barrel greenhouse-gas emissions. The issue recently became a political hot potato as Ottawa considered the application for the Teck Frontier oil sands mine in Northern Alberta, when the two levels of government presented wildly different GHG emissions numbers for the oil sector. Teck ultimately pulled its application.

That’s not the only way Premier Jason Kenney’s continuing fight with Ottawa was on display. The budget also included an entire section dedicated to his government’s pledge to get a “fair deal for Alberta,” which decried the lack of cash that the province has received through the federal government’s fiscal-stabilization program.

Mr. Toews said the inclusion of the 15-page chapter was borne out of frustration.

“When you have a province that’s made an absolutely outsized contribution to Confederation and then we see a federal government implement policies that are absolutely contrary to the economic interests of Albertans – and I would suggest Canadians – that’s why we’ve devoted a chapter to it.”

The budget also touts the creation of a 20-per-cent tax on vapes and vaping liquid, and the expansion of Alberta’s tourism levy to include Airbnb properties. The two new charges are expected to bring in $12-million a year. 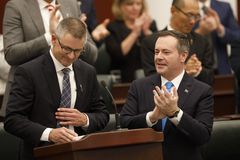 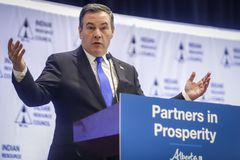 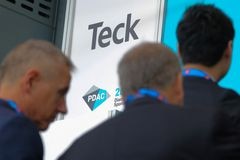