Alberta politicians have voted to cut their pay, but not before accusing one another of hidden agendas and political game playing.

An all-party member services committee agreed unanimously Tuesday to cut all elected members pay by 5 per cent, with an extra 5-per-cent cut to the salary of Premier Jason Kenney.

United Conservative members on the committee were encouraged by Mr. Kenney to make the cut to fulfill a campaign commitment he made en route to the party winning a majority government in April.

“We were elected with a mandate to be fiscally responsible and that has to start at the top,” Mr. Kenney said in a statement.

“Today’s decision is about leadership by example.”

Opposition NDP members on the committee voted for the cut as the right thing to do, given Alberta’s struggling oil and gas-based economy.

But they suggested that it was not grounded in self-sacrifice but by cynical politics employed by Mr. Kenney to give his government cover when they try to legislate pay cuts to public-sector workers, likely this fall.

“Suggesting to cut the pay of politicians a few hundred dollars a month to give them licence to screw over the working people of Alberta is frankly ridiculous,” NDP member Thomas Dang told the meeting.

“This was not political pandering,” Ms. Goodridge told reporters. “This was simply keeping a promise.”

The committee also voted to reduce MLA travel expenses, eliminate gas cards and harmonize the standard mileage rate with that of other public servants.

The pay debate sparked a larger cross-table partisan scrap over Mr. Kenney’s handling of the economy. The NDP accused the UCP of failing to do its job by delaying key decisions on school and social program funding until after an independent panel reports next week on the state of Alberta’s finances.

NDP members on the committee moved a motion to have cabinet ministers not get paid until the panel reports, but it was voted down by a UCP majority.

Ms. Goodridge told reporters the motion was political game playing not within the scope or spirit of the committee’s mandate. “That was one of the most cynical motions I’ve seen in my time in politics.”

The NDP also tried, and failed, to pass a motion urging Mr. Kenney’s government not to use the pay cut as justification to cut other public-sector salaries.

The province is currently clashing with unions representing about 180,000 public-sector workers, including nurses, teachers, paramedics, health-care workers, sheriffs and others.

The UCP passed legislation this spring to unilaterally change collective bargaining agreements to deny those workers binding wage arbitration until later this year, after the panel reports.

The unions say that’s a breach of constitutionally protected bargaining rights and are taking the province to court.

Last week, a judge in Edmonton ordered that wage arbitration resume for about 70,000 workers with the Alberta Union of Provincial Employees, saying people need to know a government will live up to the contracts it signs. 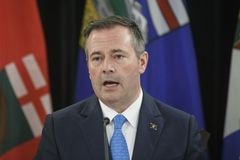 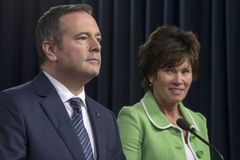