The head of the Alberta Medical Association says it’s preparing for a court fight after the province cancelled its master agreement last week and announced a new pay and benefits deal.

“Absolutely we are taking legal action,” Christine Molnar said Friday in an interview. “I see this as a fundamental violation of our right for representation.”

She said that denying doctors binding arbitration is violating their rights under the Canada Health Act and the charter.

“This is not the environment that we wanted,” Dr. Molnar said. “We wanted to work collaboratively with the government to get sustainable health care for Albertans.”

Dr. Molnar said different legal firms are exploring a possible challenge, but it may be difficult. While the AMA bargains for doctors, it is not a union.

“We are not protected under labour legislation. And so nothing we do legally is going to be easy, that’s for sure,” she said.

Dr. Molnar made the comments a day after Health Minister Tyler Shandro announced Alberta was terminating the master agreement, even though the current deal doesn’t end until March 31.

Mr. Shandro said the current $5.4-billion yearly compensation for doctors won’t change. But he said new fee and billing rules will be put in place April 1 to prevent an estimated extra $2-billion being added in the next three years to the physician budget.

The United Conservative government had said the changes are manageable because Alberta doctors make more than physicians in other provinces, taking in almost $390,000 in gross clinical earnings in 2018-19 – $90,000 more than doctors in Ontario.

The AMA disputes those numbers, saying they are based on faulty comparisons.

It said it commissioned its own study that found Alberta doctors get $386,000 a year on average, which is more than the national average of $346,000, but reflects the reality that wages across Alberta’s job spectrum are higher.

She said there is a shortage of physicians in Canada and Mr. Shandro’s plan risks seeing doctors leaving Alberta.

She also said she is hearing from family practitioners who are crunching the numbers. They say the new changes, including fee reductions for extra-long visits by complex-needs patients, mean they will lose money.

Bailey Adams told reporters she is looking at having to cut office expenses and change patient visit rules to keep the doors of her family practice open under the new fee rules.

“I’m drafting letters to my patients today that say, ‘I’m sorry. From now on, you get to discuss one concern per visit.’ And on average right now, I’m discussing three to seven concerns per visit,” said Dr. Adams, who spoke at an Opposition NDP news conference.

The province cancelled the master agreement using powers it granted itself in legislation passed last fall. The move followed failed negotiations with the AMA.

Dr. Molnar said the association had offered savings of $150-million a year and was preparing to ask for arbitration when Mr. Shandro cancelled the agreement.

Premier Jason Kenney, speaking to reporters in Calgary, said even with looming changes to physician pay in the province, Alberta’s doctors will still be the best compensated in Canada.

“If [doctors] want to leave the province with the best compensation and the lowest taxes, I hope they wouldn’t do so, but it wouldn’t be very sensible,” Mr. Kenney said. “It wouldn’t be a very logical decision to make.”

Alberta has more than 10,800 doctors split evenly between general practitioners and specialists. Most work in urban areas. 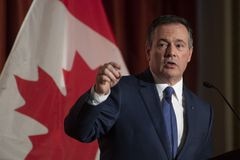