Alberta politics tends to be dynastic: One party holds majority rule for at least a decade until voters get tired of it and shift allegiance en masse to a party that’s never held government before. That’s what happened in 2015, when Rachel Notley’s New Democrats ended four decades of Progressive Conservative power. And on Tuesday, it happened again: Jason Kenney’s United Conservative Party – a fusion of the old PC and Wildrose parties that had 25 seats at dissolution – was elected in 63 ridings, or 72 per cent of legislature seats. The UCP also captured more than 55 per cent of the popular vote, more than any winning party has earned since 2001. 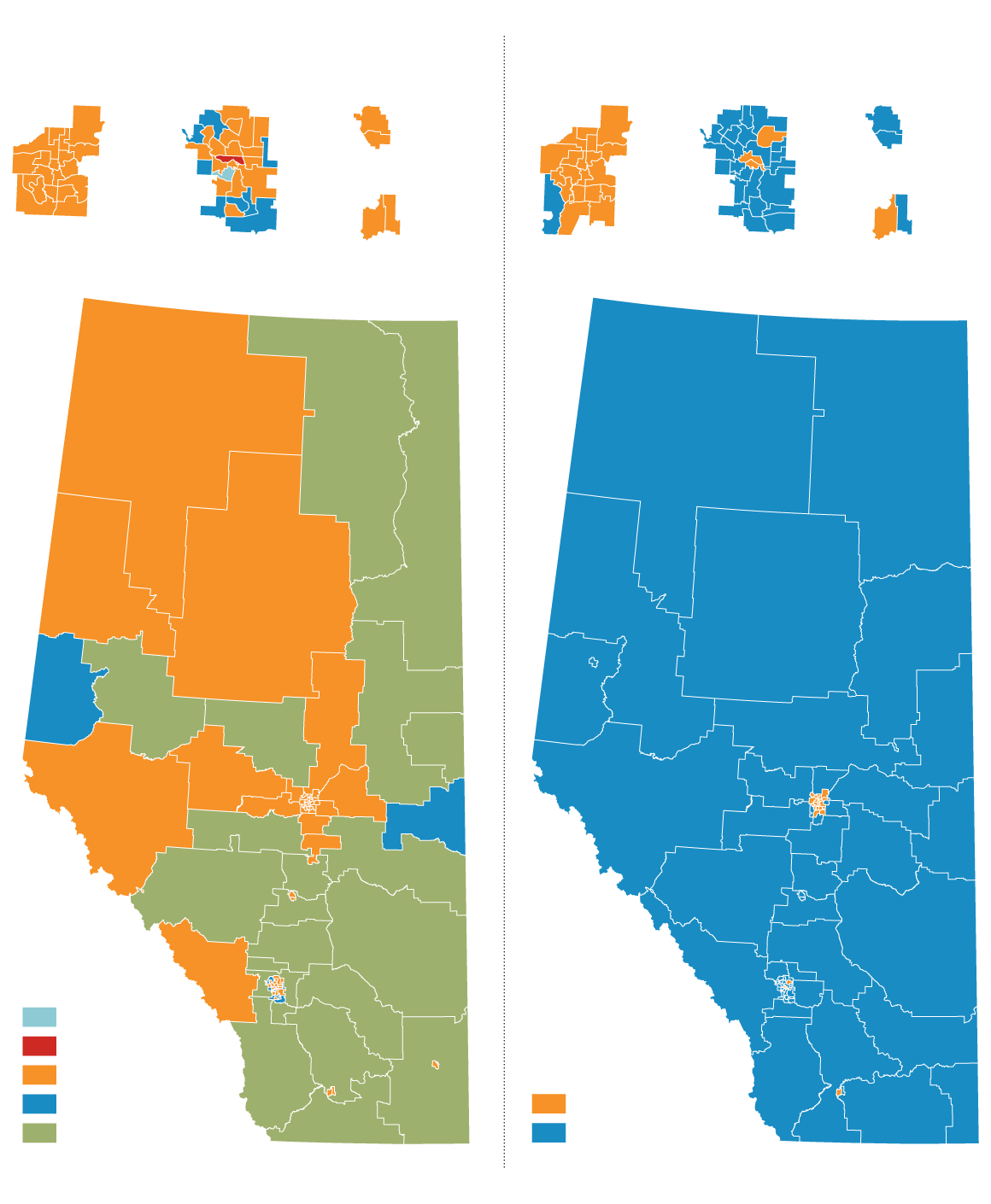 By Wednesday morning, the electoral map was a sea of UCP blue with islands of NDP orange in Edmonton, Calgary and Lethbridge. The New Democrats went from 60 per cent of legislative seats at dissolution to 28 per cent, and from 40.6 per cent of the popular vote in 2015′s election to 32.2 per cent this time around. The NDP is the first Alberta dynasty to last only one term, and with only one leader.

Many of the battleground ridings profiled by The Globe and Mail went to the United Conservatives:

What will Kenney do now?

What did he promise to do?

Alberta’s election was a divisive slugfest over climate, pipelines, social programs and the ailing Alberta economy. Here’s a full recap of where the parties stood on major issues. The big changes Mr. Kenney promised to make include:

Premiership is the latest of many political careers for Mr. Kenney. He’s been an anti-taxation activist and foe of Alberta premier Ralph Klein; an opposition MP for Reform, then the Canadian Alliance, then the united federal Conservatives; a cabinet minister at the right hand of Stephen Harper; the last leader of the defeated Alberta Progressive Conservatives; and the first leader of the United Conservative Party. The threads uniting all of these are social conservatism, bellicose populism and a belief that Albertans get less out of Confederation than they’ve contributed to it. “I think a lot of Albertans feel like they’re under siege,” Mr. Kenney told The Globe and Mail in an interview during the election campaign, though he denied that he’s been the one stoking anger in the province: “I’m trying to do the opposite. I’m trying to redirect the frustration into a positive political direction.”

During the campaign, Mr. Kenney had to distance himself from controversy over UCP candidates’ past remarks using white nationalist, homophobic and transphobic talking points. He was also dogged by questions about how he came to lead the UCP in 2017. Leaked e-mails purported to show the Kenney camp supported one rival, Jeff Callaway, as a stalking horse to oppose another contender, Brian Jean. Mr. Kenney denied any impropriety. Elections Alberta and the RCMP are investigating Mr. Callaway’s campaign donations.

Is he officially the premier yet?

Ms. Notley is still the Premier until April 30, when Mr. Kenney and his cabinet will be sworn in by Lieutenant-Governor Lois Mitchell. Until then, you can call Mr. Kenney the “premier-designate.” (Resist the urge to call him “premier-elect,” because there is no such thing in Canada. No province directly elects its premiers, they’re just the leaders of whichever party or coalition forms government.)

What will Notley do now?

With the NDP’s seat count cut by more than half, Ms. Notley – who made clear before election day that she wouldn’t resign if the NDP lost – pivoted quickly into her new role of Official Opposition leader. On Tuesday night, she congratulated Mr. Kenney and rallied her supporters to oppose his political agenda. She invoked the legacy of her father, Grant Notley, who was the NDP’s lone MLA in the 1970s and briefly led the party in Official Opposition before his death in 1984:

I was seven years old when my Dad was first elected to the legislature of this province, and that was the same year that the Conservatives first took power. I was 51 when we ended the era of one-party rule. Today, politics in Alberta has changed forever. Governing in Alberta should never again be a divine right but always, always an earned privilege.

Profile: How Rachel Notley won the respect of Albertans

What will the smaller parties do now?

For centrist parties hoping to claim middle ground in the election, Tuesday night was a total drubbing. The Alberta Party failed to gain any seats, and the Liberals went from one MLA to none. Mr. Mandel, who failed to unseat the NDP incumbent in his Edmonton riding, said the polarized election made it hard for the Alberta Party to find support, but it would regroup and run a full slate in the next election:

I really believe deeply this is the party of the future in this province when people get away from this polarization and start looking at ideas, and what our party and our province can do.

What this means for the rest of Canada

Alberta’s election was as much a referendum on Prime Minister Justin Trudeau as it was on Ms. Notley’s NDP: Mr. Kenney routinely denounced the “Trudeau-Notley alliance,” accused Ms. Notley of having “sold us down the river” by agreeing to the federal carbon-pricing plan and campaigned alongside Mr. Trudeau’s Conservative rival, Andrew Scheer. With a federal election coming up in October, Mr. Trudeau now has a determined enemy in Alberta who has promised a legal and political battle against carbon taxation.

Alberta has chosen a new government, and I congratulate @jkenney on his election as Premier-designate. I’m looking forward to working together to create jobs & tackle the issues that matter most to Albertans – and all Canadians. https://t.co/pMwhH4ybHS

After months of political tensions over the Trans Mountain pipeline extension, which his government opposes, NDP Premier John Horgan had a hard time getting enthusiastic about either candidate in Alberta’s election. Whereas Ms. Notley wrote legislation that would let Alberta throttle B.C.'s supplies of oil and gas, but didn’t use it, Mr. Kenney says he would bring those measures into law at his first cabinet meeting and play hardball with the B.C. and federal governments until Trans Mountain is built. Mr. Kenney’s election could soon ignite more legal and trade conflict between the neighbouring provinces.

Congratulations to UCP Leader Jason Kenney on his election by the people of Alberta. I look forward to working together in the interests of both of our provinces.

The Gang of Four, now the Furious Five

Mr. Kenney now joins the ranks of provincial premiers – Ontario’s Doug Ford, Saskatchewan’s Scott Moe, Manitoba’s Brian Pallister and New Brunswick’s Blaine Higgs – who have balked at the federal carbon tax and are fighting it in court. Mr. Kenney had promised to scrap Alberta’s carbon tax and file a legal challenge to the federal tax.

Congratulations to my friend @jkenney, the next Premier of Alberta!

Albertans finally have a leader to make their province open for business & open for jobs.

And Ontario has another strong partner that will fight for Canadian families against the job-killing federal carbon tax! pic.twitter.com/obM7XGCUpx

Tonight Alberta has chosen a free enterprise government, and Saskatchewan is pleased to have another ally at the table fighting for pipelines and standing against the disastrous Trudeau carbon tax. #abvotes #ableg pic.twitter.com/z2BecC8fTy

Congratulations to my friend and former colleague @jkenney on your decisive victory in the Alberta general election. #abvote pic.twitter.com/0lRPh66v6i

Editorial: There is more heat than light in Kenney’s call for Alberta to ‘fight back’

Campbell Clark: Kenney victory another thorn in side of Trudeau as he seeks re-election

View more suggestions in Following Read more about following topics and authors
Follow us on Twitter @globeandmail Opens in a new window
Report an error Editorial code of conduct
Due to technical reasons, we have temporarily removed commenting from our articles. We hope to have this fixed soon. Thank you for your patience. If you are looking to give feedback on our new site, please send it along to feedback@globeandmail.com. If you want to write a letter to the editor, please forward to letters@globeandmail.com.
Comments