United Conservative Party Leader Jason Kenney detailed for the first time plans to roll back Alberta’s climate regulations as he seeks to boost investment and restore Conservative rule in the oil-rich western province.

The former federal cabinet minister has repeatedly said he would scrap a province-wide carbon tax and do away with a cap on emissions of greenhouse gases from the oil sands, should the UCP prevail in the April 16 vote.

But the party is also promising to nix subsidies for solar and wind power and says it will introduce a lower levy on large industrial operations while carving out room for the most efficient coal plants to remain open.

The blueprint, revealed over the weekend, amounts to a sharp break from the path charted by Rachel Notley’s New Democratic Party government and puts Alberta on a potential collision course with Ottawa on climate change.

Mr. Kenney has already backed a legal challenge by Premier Scott Moe of Saskatchewan that questioned Ottawa’s authority to impose a carbon tax on provinces that don’t have one. He has also pledged to launch his own challenge against the federal levy, which took effect Monday in Saskatchewan, Manitoba, Ontario and New Brunswick.

A win for Mr. Kenney would bolster opposition faced by the federal Liberals and leave Mr. Trudeau without a key provincial ally on climate policy heading into a fall election in which energy and environment issues will play a major role.

“Everything that he’s shown so far is that he wants to have this fight,” said Andrew Leach, a key architect of the provincial NDP’s climate policies and associate professor of natural resources, energy and environment at the University of Alberta.

Alberta under Ms. Notley implemented a carbon tax, now at $30 a tonne, and has pledged to phase out coal power and generate one-third of the province’s electricity from renewable sources by 2030.

But the province remains by far Canada’s largest source of greenhouse gases, accounting for nearly 40 per cent of the country’s emissions in 2015.

Still, annual GHGs are now projected by the province to stay roughly flat, around 263 megatonnes by 2030. Environment and Climate Change Canada had projected a rise to 314 megatonnes for Alberta by that time. Mr. Kenney said his plan would lower emissions by 43 megatonnes over the same period.

Currently, Alberta climate regulations exempt oil and gas companies outside the oil sands from a levy on fuel for drilling and other fugitive emissions of methane.

Mr. Kenney on Monday brushed aside any suggestion that his combative approach could backfire and said a UCP government would use the courts to ensure it doesn’t. “Plan A is fighting for our rights in court,” he said at a campaign event in Edmonton. “Plan B is defeating Justin Trudeau at the polls.”

The UCP says cancelling Alberta’s carbon tax would save residents $1.4-billion a year. In its place the party is proposing a $20-per-tonne levy that would apply to industrial facilities that emit more than 100,000 tonnes of carbon dioxide. Companies that exceed that threshold could also purchase offset credits if they are unable to lower their emissions.

But large power plants that rely on coal could remain open, provided they emit no more carbon dioxide than the most efficient natural-gas facilities.

Duncan Kenyon, regional Alberta director at the Pembina Institute think tank, said meeting the standard would require a massive investment for all but the newest coal plants, which face growing competition from lower-cost renewable energy.

“It doesn’t strike me as 21st-century economic and climate policy,” he said by phone.

In Alberta, a sour electorate heads to the polls Subscriber content
March 30, 2019 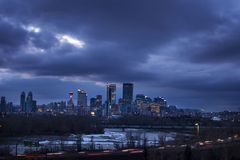 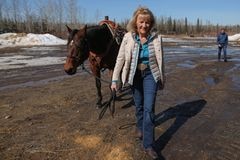 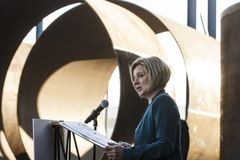 Follow Jeff Lewis on Twitter @jeffalewis
Report an error Editorial code of conduct
Due to technical reasons, we have temporarily removed commenting from our articles. We hope to have this fixed soon. Thank you for your patience. If you are looking to give feedback on our new site, please send it along to feedback@globeandmail.com. If you want to write a letter to the editor, please forward to letters@globeandmail.com.
Comments are closed