Alberta has delayed plans to release timely information on overdose deaths that experts say is crucial to stopping the surge in drug fatalities amid the coronavirus pandemic.

The government in June said it was aiming to unveil a new system for reporting deaths related to opioids by the time it released its second-quarter report on substance use, expected around the end of August or September. Now the government says it does not know when the new system will be ready.

Experts have, for months, been calling for Canadian jurisdictions to release overdose data more quickly, arguing the information is necessary to gauge how to best respond to the drug crisis in light of the coronavirus.

Eugenia Oviedo-Joekes, a professor at the University of British Columbia’s School of Population and Public Health, said governments in general delay data when they are short on the administrative horsepower necessary to complete the number-crunching or because the information does not align with their politics.

“Data is really important because it allows policy to change in a timely manner,” she said. “Timely data on the overdoses will help the [harm-reduction] advocacy efforts specifically in Alberta when so many services are being shut down.”

Alberta attributed the delay to staffing pressures brought on by COVID-19 and its plans to expand the online system to cover more than just statistics tied to opioids. This will better align with the province’s approach to treating addictions, the government said. The United Conservative Party government emphasizes recovery programs more than harm-reduction methods.

“We’re trying really hard to create sort of a broader Alberta substance-use surveillance dashboard,” said Marshall Smith, the chief of staff for Jason Luan, who is the associate minister of mental health and addictions. “We’re bringing in the rest of the addiction-care system.”

The system’s plans now call for tracking information such as treatment-bed capacity and use, Mr. Smith said as an example. It will also monitor factors such as outcomes, patient retention, program completion, and how well organizations are doing connecting clients to housing, he said Tuesday.

Alberta would prefer to release the new system as a full package rather than piecemeal, he said. Mr. Smith is hopeful the project will be ready in a “reasonable” amount of time.

The government is also reviewing the future of its supervised drug-consumption sites. But it has not set any timelines.

Alberta recorded 301 deaths tied to opioid overdoses in April, May and June. This second-quarter tally, which was released in September, is double the death toll in the three months prior and the most fatal in Alberta’s years-long struggle to control the opioid crisis. Alberta’s quarterly statistics come out two or three months after the relative quarter, meaning the death toll for the third quarter will not be known until November or December. British Columbia, meanwhile, releases monthly statistics on overdose fatalities, which spiked this spring and summer.

Physical-distancing rules have reduced capacity at supervised consumption sites, where substance users take illicit drugs under the eye of health-care professionals there to reverse overdoses. Alberta, when it released its second-quarter report, linked the spike in deaths to anxiety and isolation accompanying the COVID-19 pandemic. The coronavirus has killed 286 people in Alberta as of Tuesday, making it less deadly than the opioid crisis.

Lethbridge is grappling with more substance users consuming drugs on the streets after its supervised consumption site wound down in August. Alberta accused the supervised consumption site’s operators of financial mismanagement and cut off funding for its 13 injection cubicles and eight inhalation stalls. Substance users in Lethbridge, which has the highest rate of deaths tied to fentanyl overdoses in Alberta, now have access to a mobile consumption site in the form of a van with capacity for three clients at a time.

Deena Hinshaw, Alberta’s Chief Medical Officer, said she does not know when the new online tool will be available, but reaffirmed that timely and public statistics are still in the works.

“Given the toll that opioids have taken not just this year but in the past several years, it remains something that is critical to address and the data accompanying that, again, is something we are working to make available in a timely way.” 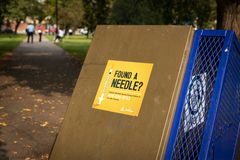