Alberta’s new Environment Minister says the province needs to give more weight to people who use the backcountry for recreation when it makes parks and conservation decisions, pointing to the defunct plan to create the Bighorn wildland park an an example where the previous government failed to strike that balance.

Jason Nixon said shortly after taking office that he was cancelling the Bighorn proposal, which would have designated an area that covers 4,000 square kilometres between Banff and Jasper as a protected wildland area. The proposal became a flashpoint ahead of the provincial election, with local residents raising fears that the plan would impose strict limits on all-terrain vehicles, hunting, fishing and other activities in the area.

Mr. Nixon said the process under the previous NDP government did not do enough to include those voices in the process.

“There are three legs to the stool: environment, economic, recreation,” Mr. Nixon said in a recent interview.

“With Bighorn specifically, a lot of people depend on that area for recreation. We want people to be able to enjoy that resource. We have to be able to do it in an environmentally friendly way and find that balance.”

Mr. Nixon had been among the most vocal critics of the Bighorn proposal, which prompted the previous environment minister, Shannon Phillips, to cancel public-consultation events over complaints that government officials had been subjected to harassment.

Under the Bighorn plan, activities such as ATV and motorcycle use would have been permitted on designated trails, though opponents said it wasn’t clear where those trails would be and how much access they would lose. Some hunters and anglers also said they were worried about the plan curbing their use of the area.

They pointed to restrictions that limited motorized recreation in other parks, notably the Castle Provincial Park and Castle Wildland Provincial Park in southwest Alberta, which were created in 2017.

Supporters of the Bighorn park noted the region is home to a number of sensitive species, including grizzly bear, wolverine and bull trout, as well as the headwaters of the North Saskatchewan River. They warned that a range of activities, from oil and gas exploration to ATV use, threatens that ecosystem.

Mr. Nixon said no one believes it’s appropriate for off-road vehicles to be used without limits.

"Certainly there are areas where it’s not appropriate or smart for that activity [the use of off-highway vehicles] to take place,” he said.

“We want to work with the clubs and the organizations out there to make sure it's taking place in the right spot, to maintain trails, to put bridges over environmentally sensitive areas, as well as to invest in enforcement.”

He said the future of the area would return to the regional planning process that was already in place. The government will also review previous land-use decisions, though Mr. Nixon stressed that there is no plan to reverse the creation of protected areas such as the Castle parks.

Katie Morrison, the southern Alberta conservation director for the Canadian Parks and Wilderness Society, said the park proposal would have made it easier to protect the area from industrial development or increased forestry. For motorized recreation, she said the designation would have allowed the government to mitigate the impact of that activity while still allowing it on a managed trail system.

“We have never advocated removing recreation from an area, we know these places are very important for people,” she said. “But those can’t supersede the real limits and the real capacity that our natural systems have.”

She noted that motorized activities such as ATV use can displace other people using the area, such as hikers and equestrian riders.

When it comes to the Bighorn area in particular, Ms. Morrison said her group hopes to work with the new government to push for similar protections, which she says needs to include the legal protection that comes with park status.

Geoff Jilg, president of the Rocky Mountain Dirt Riders Association, said groups such as his felt as though they had been cast aside in a process with a foregone conclusion.

He said people who use off-road vehicles or motorcycles in the Bighorn area saw the whole exercise as an excuse to shut them out of the area. For example, the plan said those activities would be allowed on “designated trails” but was vague about where those would be or how that would be determined

“We love these spaces in Alberta, we protect them, and we are trying to use them responsibly,” Mr. Jilg said. “We support managed use.”

Mr. Jilg agreed that there must be a balance when managing the backcountry, but he said, “It’s a very slippery slope when public land is taken away from people.” 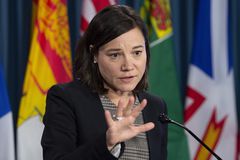 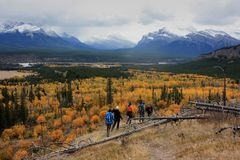