More than 1,000 patients are being treated for COVID-19 in Alberta hospitals, pushing the province closer to the possibility of having to activate a triage system for critical-care patients.

The situation prompted the Alberta government to request federal help earlier this week to airlift patients out of the province. Premier Jason Kenney also replaced the health minister amid growing criticism over his government’s handling of the pandemic.

Hospitals across the province are being pushed to the brink, with ICU surge capacity nearing the 90-per-cent threshold at which Alberta Health Services may activate the critical-care triage protocol. The province has been creating surge beds and is requesting outside help to prevent that scenario.

“We’re all anxiously keeping our eye on the daily numbers,” said Ilan Schwartz, an infectious disease physician at the University of Alberta Hospital in Edmonton. “We’re just hoping and praying we don’t get [to the protocol].”

ICU surge capacity was at 87 per cent on Wednesday, according to Alberta Health Services spokesperson Kerry Williamson. The province has created 41 ICU surge spaces in the past week, including 13 since Tuesday afternoon, he said.

The province’s ICUs are overrun and many patients are being treated in makeshift critical-care beds that have been set up in other hospital wards, Dr. Schwartz said. The continuing crisis makes it difficult to provide the same level of care critical patients would normally receive, he said. For instance, critical-care patients typically have a nurse solely focused on them, but during the fourth wave, nurses are treating multiple patients at a time.

“We’re providing a level of respiratory support, we’re administering drugs that would not typically be considered safe to administer outside of an ICU setting where there’s one-to-one nursing,” Dr. Schwartz said.

Alberta tried to wish away the pandemic. That made it so much worse

Alberta has asked Ottawa to send ICU nurses and respiratory therapists to help at the province’s overstretched health facilities.

Alberta has also requested help from other provinces. Mr. Williamson said he could not provide any details, but Ontario Health Minister Christine Elliott confirmed that her province would be assisting, likely by accepting critical-care patients.

B.C. and Saskatchewan have both said they do not have the capacity or resources to help out. Quebec said it is experiencing its own staffing shortages but could potentially assist with some urgent cardiac surgeries.

Mr. Williamson said the province is working to avoid a triage protocol situation, but that health care staff are being educated on the details just in case. The protocol “will only be implemented if all other efforts at creating additional capacity have been exhausted,” he wrote.

Shazma Mithani, an emergency room physician in Edmonton, said the current situation is unsustainable and that without further action to reduce transmission, the crisis will worsen.

“It is a dire situation,” Dr. Mithani said. “We’re seeing our ICUs will fill up very rapidly.”

This summer Alberta lifted all public-health restrictions related to COVID-19. The province recently reinstated some and introduced a voluntary vaccine-passport program to address the surge in infections and hospitalizations.

But Dr. Mithani said the measures don’t appear to be strong enough to make enough of a dent in the fourth wave. For instance, she said, under the vaccine-passport program, people can either show proof of vaccination or a negative COVID-19 test taken within 72 hours to gain entry to a restaurant, gym or concert venue. But a person who tests negative could become positive the next day, Dr. Mithani said, meaning they could still spread COVID-19 to others around them.

“We can’t continue to have this degree of transmission. It’s unsustainable,” she said.

Critical-care capacity has increased to 175 beds – up from 130, and a baseline of 79 – to accommodate an updated projection of 125 COVID ICU patients, up from a projection of 80 just one week earlier, according to the province’s health authority. Beds for non-ICU patients have also increased to 350, up from 255.

Non-urgent surgeries are being postponed until at least the end of October as staff are redeployed across the province, and a unspecified number of patients are being transferred to hospitals that may not be closest to home. 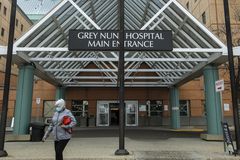 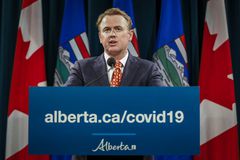 Follow Carly Weeks and Andrea Woo on Twitter @carlyweeks @andreawoo
Report an error Editorial code of conduct
Due to technical reasons, we have temporarily removed commenting from our articles. We hope to have this fixed soon. Thank you for your patience. If you are looking to give feedback on our new site, please send it along to feedback@globeandmail.com. If you want to write a letter to the editor, please forward to letters@globeandmail.com.
Comments