Alberta’s governing United Conservative Party has passed legislation that will remove the province’s election commissioner in the midst of an investigation into the leadership campaign that elected Jason Kenney.

The bill, which introduces a number of changes to provincial boards and commissions, passed third reading in the legislature despite a series of procedural manoeuvres from the Opposition New Democrats to derail it. NDP Leader Rachel Notley, who preceded Mr. Kenney in the premier’s office, has called the bill undemocratic and accused the government of attempting to disrupt an investigation into the UCP.

The government argued that the bill is simply an administrative change that will move the position of independent election commissioner under the purview of Elections Alberta, whose chief electoral officer will now hire a replacement. He is free to rehire the current commissioner, Lorne Gibson, the government has said.

Mr. Gibson has issued more than $200,000 in fines as part of an investigation into the 2017 UCP leadership race and allegations of a “kamikaze” candidate. The investigation relates to allegations that a failed candidate, Jeff Callaway, broke election finance laws to fund a stalking-horse campaign designed to help Mr. Kenney. Both deny any wrongdoing.

Mr. Gibson’s termination takes effect when the bill receives royal assent. It’s not clear when that will happen.

“Today’s passage of Bill 22 is a black mark on this Premier, this cabinet and every single private member who voted for it,” Ms. Notley told reporters in Edmonton after the bill’s passage.

“Jason Kenney has turned the assembly into a bully pulpit, using the power entrusted to him by the people of Alberta for his own personal, partisan and political gain. It is the most disgusting abuse of power in the history of Alberta.”

Mr. Kenney, who has been in Texas this week, addressed the legislation for the first time during a live video broadcast to Facebook on Thursday afternoon. He echoed his party’s argument that the move would save money while still ensuring that election laws are enforced. He acknowledged that the commissioner had been investigating previous campaigns, “including, apparently, some involving the United Conservative Party.”

“There should be no interruption in any ongoing investigations or any enforcement action,” he said.

“I think that the NDP histrionics on this issue have been classic overkill.”

Earlier this week, Mr. Gibson issued a statement that warned that the legislation, and the decision to eliminate the position of a standalone, independent election commissioner, would be harmful.

“I am concerned about the potential negative impacts on the independence of election administration and the real and perceived integrity of the election process,” the statement said.

The bill’s passage comes after a series of attempts by the New Democrats to delay or block the legislation.

Ms. Notley was ejected from the legislature after she refused to apologize for accusing the UCP House Leader of misleading the House. She has not returned.

Ms. Notley also wrote Lieutenant-Governor Lois Mitchell asking her to resort to seldom-used powers to block the legislation. On Thursday, Ms. Notley said Ms. Mitchell’s office informed her that it would not be taking any action on the bill and reminded her that the lieutenant-governor only speaks to the premier.

The NDP also wrote to the province’s ethics commissioner, asking for a ruling that UCP members be prevented from voting on the bill, in light of the investigation.

In response, the ethics commissioner, Marguerite Trussler, responded that she had no power to interfere with the legislative process. However, she warned that MLAs currently under investigation by the election commissioner could be in violation of conflict-of-interest laws if they participated in debates or votes on the bill. 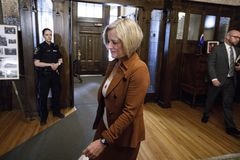