A United Conservative Party backbencher who tabled a private member’s bill aimed at protecting the conscience rights of Alberta doctors says he believes the proposed legislation is constitutional and won’t change the current reality for either physicians or patients.

Instead, MLA Dan Williams says his bill is designed to shield health-care providers in the province from an Ontario Court of Appeal ruling that physicians with religious objections to procedures such as medical assistance in dying and abortion must provide referrals to willing doctors.

The bill has prompted criticism from medical groups, unions and patient advocates who say it would make it more difficult to access those health services, and legal experts have argued it would be unconstitutional, particularly in light of the Ontario court decision.

The proposed legislation has also led critics to accuse Premier Jason Kenney of breaking his election campaign promise that abortion would not be on the agenda if his party formed government.

Currently, Alberta’s medical regulator requires doctors with moral objections to a procedure to either refer the patient to a willing physician or point them to a resource that can provide that information.

Mr. Williams, who represents the Northern Alberta riding of Peace River, says he doesn’t see why that rule would need to change if his bill becomes law.

“My intention is for everything to remain, with the same access that patients have now to all of these services,” he said in an interview. “I think it’s a good standard.”

Bill 207 would ensure that doctors cannot be compelled to participate in procedures that contravene their beliefs, as the current law does. But critics say it goes further in saying they must not be compelled to make “formal or informal” referrals in such cases. It would also prevent regulators from compelling health-care workers to make morally objectionable statements to a patient. Any complaints related to an issue of conscience rights would be automatically dismissed.

Mr. Williams says the bill strikes the right balance between the rights of patients and the rights of doctors. He also says patients have a number of options to access health services, such as the province’s 811 health line, and in many cases can contact facilities such as abortion clinics without a referral.

“This is about making sure that physicians, surgeons, nurses and health-care providers don’t have to choose between their most deeply held convictions and their jobs,” he said.

The College of Physicians and Surgeons of Alberta initially said the bill appeared “broadly consistent” with its current rules, but it has since revised that position with a statement that does not take a stand.

The latest statement, from communications director Jessica McPhee, notes there are clear differences. Specifically, she pointed to the college’s requirement that a doctor must, at a minimum, direct a patient to a resource with information about accessing care, while the bill would prevent the college from requiring a doctor to do or say anything that would violate their beliefs.

“We are confident that our standard of practice meets the needs of Albertans,” the statement said.

The president of the Alberta Medical Association, Christine Molnar, wrote a letter to the province this week objecting to the bill, calling it unnecessary and warning that it could have unintended consequences.

Dr. Molnar argued the current rules are working well and questioned the need to open the issue to debate. She added that the language in the bill is vague.

“One of my concerns is that this bill is framed around the rights of health-care providers, including physicians, but there has to be some protection of the rights for patients,” she said in an interview.

“It’s a very complex situation. Is it really best managed through legislation?”

Health Minister Tyler Shandro has said the government supports balancing conscience rights with patient access, although he acknowledged there are concerns about the meaning of the proposed legislation.

“Our government has made it clear that we’re not reopening the abortion debate,” he said at an unrelated announcement this week.

“Abortion is a legal health service in Canada, and my job as Health Minister is to ensure that Albertans have access.”

It is not unusual for private member’s bills to become law. Of three tabled in the spring legislative session, two – both proposed by UCP members – have received royal assent. 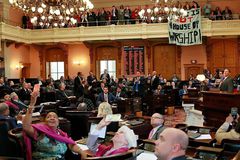 Alberta MLA tables bill that would let doctors refuse to refer patients for procedures they object to
November 7, 2019