The lawyer for Alberta Party Leader Stephen Mandel told a judge Friday that if his client remains disqualified as a provincial election candidate it would be “catastrophic” for the party.

“The Alberta Party will lose their leader for the upcoming election and be forced to replace Mr. Mandel at the very last minute,” Debra Curcio Lister told Justice Gaylene Kendell in Court of Queen’s Bench.

Mandel was notified three weeks ago by Elections Alberta that he has been banned for running for five years after he missed the filing deadline for financial information on his nomination campaign in 2018.

Curcio Lister was in court arguing to have that ban overturned. Kendell said she would deliver her decision some time next week.

Mandel was not at the hearing but later spoke outside court about the delay.

“It’s fine … We believe we have a very strong case and the decision will go our way.”

Six other party candidates have also been given bans for late filing. One of those candidates, Moe Rahall, had his ban overturned Friday.

The disqualifications come at a precarious time for the party as Premier Rachel Notley can drop the writ any time for an election that by law must be wrapped up by the end of May.

The Alberta Party bills itself as a centrist alternative between the two heavyweight parties – the NDP and the United Conservatives. It is making a concerted push to escape the fringes of the province’s political landscape.

Mandel, the former mayor of Edmonton and a former Progressive Conservative cabinet minister, is one of the pillars of that strategy, which also includes running candidates in all 87 ridings.

He won the party leadership a year ago and last May the nomination to represent the party in the constituency of Edmonton-McClung.

Elections Alberta then sent a letter to him and Brian Heidecker, the chief financial officer for his nomination, giving them a deadline of Sept. 12, 2018, to file the list of contributions and expenses tied to his nomination.

That deadline included a grace period of 10 working days, but even with that and, as court heard, a flurry of emails among party officials urging the papers be filed “ASAP,” the deadline was missed by one day.

Under the rules, a candidate can get the ruling overturned if there are mitigating or extraordinary circumstances. Curcio Lister argued that was true in this case, telling the judge that a confluence of problems struck the Mandel campaign at that period.

She cited an affidavit from Heidecker stating that he was ill during the crucial time around the filing deadline, with severe stress-related symptoms that made it difficult for him to function and concentrate at work.

“Other people were picking up his responsibilities,” said Curcio Lister.

She also noted that Mandel wasn’t trying to get away with anything underhanded, noting that as a nominee he didn’t rack up any expenses or contributions to report.

The case has raised the larger question of whether a five-year ban for missing a filing deadline is too severe.

The NDP says the penalties are consistent with the overarching goal of transparency and accountability in politics, while the United Conservatives say the penalty is too harsh.

When his disqualification was made public two weeks ago, he immediately announced that he would fight the ban on the grounds that Elections Alberta had delivered confusing and conflicting information on the deadline.

He said at the time that he believed he had met the deadline, adding, “We hope our efforts (in court) will clarify the rules, which will benefit all candidates – as well as the democratic process.”

However in court, Curcio Lister did not contest the fact the report was filed late, and instead focused on Heidecker’s illness and the campaign confusion as mitigating circumstances.

Mandel declined to answer a reporter’s question on the apparent change in legal strategy.

“I’m not the lawyer. I’m not answering questions on lawyers,” he said. 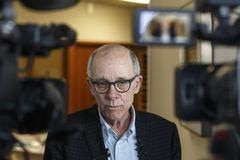 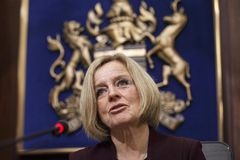