Alberta Premier Jason Kenney is seeking nearly $1.7-billion from Ottawa under a little-used federal program after a collapse in oil prices that sent the provincial economy into a tailspin.

Mr. Kenney’s request comes as he’s struck a panel that is investigating whether to renegotiate the province’s relationship with Ottawa and seek substantially more autonomy from the federal government. According to Alberta’s 2019 budget, the Kenney government is expecting to receive $252-million from the federal government’s Fiscal Stabilization Program. Ottawa has yet to approve that request, but Mr. Kenney has already said he wants much more.

The Alberta Premier has said a $60-a-person cap on the program, which helps provinces that have faced unusually large revenue collapses, should be lifted retroactively to help the province balance its books. Mr. Kenney said an end to the cap would increase the federal payout to the province for the 2015-16 recession from the $500-million it could get under the current formula to about $1.7-billion.

Alberta received $251-million from the Fiscal Stabilization Program in 2016 as unemployment soared and the provincial budget dipped deep into deficit. The province’s previous NDP government filed a request in September, 2018, for a second payment under the same program.

Mr. Kenney has asked that Prime Minister Justin Trudeau’s government quickly approve the year-old request and then send Alberta the significantly larger cheque he’s seeking. The province is not eligible for a third year of funding because revenue recovered swiftly after 2016, according to Alberta’s finance ministry.

Speaking on Saturday, Mr. Kenney said money from the federal government would help his province as its economic malaise drags on. Alberta has yet to recover fully from the recession that ended in 2016. “It was designed to be an equalization rebate for have-provinces when they have a sudden and unexpected decline in revenues,” he said in Red Deer.

The federal Finance Ministry did not respond to a question on why the initial request for funding has not been approved in the 14 months since it was sent to Ottawa. A spokeswoman said the request “is still being assessed.”

According to Mr. Kenney, the $60 cap is punishing Alberta. The Fiscal Stabilization Program, unlike the much larger equalization program, is one of the only ways Alberta can receive money from Ottawa without any conditions. “It’s another example of how we have fought to make the federation fair, but those victories have been ultimately reversed,” Mr. Kenney said of the cap, which was introduced in 1987.

Since the first payment for fiscal stabilization was made to British Columbia in 1983, the program has spent about $2-billion. Ontario has been the largest recipient to date, followed by Alberta, according to information from the federal department of finance.

Records from a Senate finance committee meeting in 1987 indicate that the $60 cap was introduced after the first use of the program by B.C. No mention was made of Alberta at the time.

The current formula for the stabilization program should be changed because it doesn’t provide enough help to provinces that rely on volatile resource revenues, says University of Calgary economist Bev Dahlby.

“It’s currently focused on a single year-over-year decline. I think the supports should be there for more than one year and allow time for adjustment. Employment insurance isn’t there for just one month after you’re unemployed and this shouldn’t be a one-off,” he said.

Despite Mr. Kenney’s comment that the program was designed to help have-provinces during times of trouble, the federal government does not refer to the equalization program in its description of the stabilization program. A number of have-not provinces have received money for fiscal stabilization while simultaneously getting payments for equalization, a program that sends money annually to poorer provinces to ensure all Canadians have access to similar levels of public services.

Mr. Kenney’s request echoes a situation in 1993 when Bob Rae’s Ontario government went to war with then-prime minister Brian Mulroney, seeking $1.2-billion in fiscal stabilization from Ottawa. The province eventually got $567-million for that year. 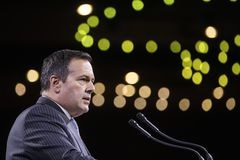