The Kenney government’s budget follows a year in which councils across Alberta have had to rein in spending, especially in Calgary, where the city’s property-tax base shrank sharply as the downtown office market was hollowed out by struggling energy firms.

Along with a series of already announced cuts, the province’s largest city is now contemplating shuttering pools and recreational facilities as revenues drop.

Tabled on Thursday, the province’s budget expects to cut $1.3-billion in spending while eliminating more than 2,100 public-sector jobs in the coming years. Among the province’s cuts will be trims to operating grants and infrastructure spending that cities depend on.

The mayors warn that those cuts will make stretched budgets worse and will weaken their cities, especially Edmonton, the capital, due to its large public-sector work force.

Alberta Finance Minister Travis Toews has cautioned that deeper cuts could be required if oil prices don’t perk up and the expansion or replacement of three pipelines aren’t completed when expected.

Mr. Kenney has promised that the province will balance its budget within four years. Mr. Nenshi, the Calgary mayor, says some of the cuts unveiled on Thursday could take decades to fix.

Speaking at City Hall on Thursday night, he crumpled up a piece of paper and threw it to the ground. The paper represented the United Conservative Party’s promise to keep in place city charters negotiated over years with Edmonton and Calgary. The budget announced that the charters would be revoked and funding for the two cities cut from $500-million to $455-million starting in 2023.

“I expected their word to be worth something,” Mr. Nenshi told The Globe and Mail of Mr. Kenney’s platform promise.

The new fiscal framework, which had been signed by the previous New Democratic government, had already made a significant cut. “Calgary would not return to 2017 levels of funding until 2032,“ Mr. Nenshi said. “They told Calgarians that they would honour that promise. They didn’t. They ripped it up and unilaterally put in a new fiscal framework that is significantly lower than even that.”

Complicating matters for the city, which faced protests over property-tax levels this year, the budget increases the provincial property tax in Calgary by $15-million next year.

Mr. Iveson, mayor of Edmonton, was at the city’s airport on his way to Europe with a military delegation when he got word about the depth of the funding cuts. He turned around and headed back to his office.

The city’s large transit expansion will now face delays and costs could rise, according to Mr. Iveson. “I think we can persevere with the project but it’s discouraging that the province is downloading its fiscal challenges on the order of government with far less resources. It will have real implications for Edmonton and Calgary property owners,” he said.

Edmonton will need to open up its 2019 budget, with only weeks left in the calendar year, to find more reductions after the province decided to cut by 25 per cent a grant it gives the city in lieu of paying property taxes on government buildings. The grant will be cut by another quarter next year.

“Reducing it by 50 per cent and starting in the current year is a real poke in the eye to Edmonton, on top of everything else we’ve seen,” he said.

Mr. Toews defended the cuts and said the transit funding is delayed, not cancelled. “We have to manage our finances responsibly,” he told reporters in Calgary on Friday. “… Both LRT projects [in Edmonton and Calgary] are still in our capital plan. We have just moved them back a couple of years.”

Smaller cities will not be hit as hard as the province’s two largest urban centres, but the skinnier budget means major projects will be cancelled or delayed. 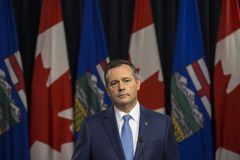 Opinion
Jason Kenney is uniquely placed to save Alberta – if he has the audacity to impose a sales tax
October 25, 2019 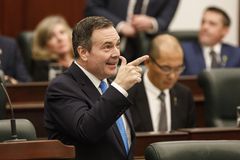