The Alberta government is pushing back against a federal deadline for a plan to protect woodland caribou under the Species at Risk Act, saying the still-fragile state of the province’s economy means it will suspend any consideration of setting aside conservation lands until it studies the socio-economic effects.

A strongly worded letter – in government terms – from Alberta to Ottawa Monday sets up the potential of a political showdown over environmental measures. It asks Ottawa to ante up more funding, saying the cost of restoration over the next four decades could top $1-billion and that even rearing facilities for caribou will cost $75-million. Premier Rachel Notley’s government also said it is sending a delegation to Ottawa to discuss the “enormous undertaking to fulfill federal law,” and asks that Federal Environment Minister Catherine McKenna hold off from “prematurely implementing federal protection orders that will not have effective outcomes for Canadians and Albertans.”

The letter comes as many other provinces also struggle or face environmental criticism in their efforts to protect the caribou. But the move also comes as many Albertans openly question whether the federal government places enough value on the province’s largest industry, oil and gas. And Alberta’s NDP government is just more than a year away from a provincial election that will pit it against Jason Kenney’s United Conservative Party, which is leading in the polls and has promised to take a harder line when it comes to dealing with Ottawa over energy policy and pipelines.

Under the Species at Risk Act, Ms. McKenna must make a determination this spring whether provincial recovery plans are sufficient to protect threatened boreal caribou herds. If provincial efforts are deemed to have fallen short, she must recommend to cabinet that Ottawa set its own rules – though cabinet has the option to accept or reject that recommendation.

Speaking in Alberta’s legislature on Monday, Alberta Environment Minister Shannon Phillips said “the federal Species at Risk Act is an extremely inflexible instrument” that has already had negative economic consequences for Alberta, referring to a 2014 federal emergency order that blocked oil and gas development near Manyberries, Alta., to protect the endangered greater sage-grouse.

Ms. Phillips said a public consultation on Alberta’s draft plan for caribou has convinced her government that economic anxiety in the northern part of the province is so extensive that more work is needed to understand the effect of caribou conservation efforts on jobs and industries still recovering from a sharp reduction in oil industry investment. The government also said in the letter it will work with industry to try to make sure no similar federal emergency protection orders are implemented for caribou.

The range of the boreal caribou extends across the country from Yukon to Labrador, but its habitat has been increasingly disturbed by industrial activity such as forestry, mining and oil and gas development, as well as by forest fires, the spread of pests and other impacts of climate change. Caribou are considered both sacred and a major resource for Indigenous people.

In the assessment released in October, Environment Canada said provincial actions were falling short of what is required to ensure the health of the boreal caribou species. Of 51 separate herds across the country, 20 have declined in the past five years, 10 were stable, and governments had insufficient data to estimate numbers for the other 21 groups.

“We look forward to welcoming the Albertan delegation. Provinces and territories have the primary responsibility for management of terrestrial species at risk,” she said in an e-mail, without a more detailed response to Alberta’s letter. 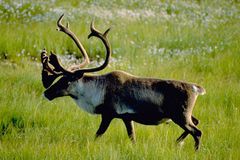 'Caribou have a right to live,' says First Nation chief trying to save the animals
December 22, 2017 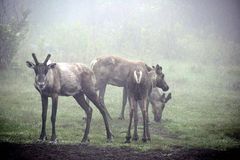