A group of patients participating in Alberta’s drug therapy for severe opioid addictions is suing the government in an effort to stop the province from shuttering the treatment program next year, arguing its closing would infringe on their constitutional rights by putting lives at risk.

Alberta’s United Conservative Party government prohibited its injectable opioid agonist treatment, or iOAT, programs from accepting new patients in March, and said its existing 65 patients must be off the regime in a year’s time. Eleven iOAT participants last week filed a lawsuit to thwart the government’s plans, including the ban on new patients. In iOAT, patients control their withdrawal symptoms by injecting hydromorphone, an opioid analgesic, by prescription.

The lawsuit encapsulates the political battle over how to best manage the opioid addiction crisis in Alberta. The UCP shies away from treatment and harm-reduction methods where the government condones and facilitates drug consumption, instead favouring recovery programs with abstinence as the end goal.

Government critics argue limiting or ending access to programs like iOAT and supervised drug-consumption operations, where clients use illicit substances under the watch of health care professionals there to reverse overdoses, amounts to state cruelty and discrimination, and undermines the right to life, liberty and security for people with severe opioid addictions.

Amanda Frances Marie Ervin is among the 11 iOAT patients suing the government. She turned to hard drugs at 11 after a childhood of abuse, and later was in and out of jail. “I was dead inside, and so angry at the world. I didn’t care if I lived any longer,” she said in court documents. “I was hoping for death.”

Ms. Ervin got into an iOAT program in November, 2018, which she said changed her life. She gained weight, cut her use of street drugs, found housing and purpose, according to documents filed in court.

“Shutting down the iOAT program robs me of the hopes and possibilities I have for a better future,” she said. “A life where I am able to better manage my opioid dependency or beat it entirely.”

Injectable opioid drug therapy is reserved for patients who have unsuccessfully tried other treatment options, including oral opioid agonist therapy, where street substances are replaced with drugs such as suboxone and methadone. Alberta, when it announced its iOAT plans in March, said existing patients would be “transitioned” to other forms of treatment over the next 12 months. The government said it would review iOAT, which started as a pilot project, and then decide whether to continue funding it.

The provincial government said it is proceeding with its transition strategy. More than 40 per cent of “active” iOAT clients have shifted to other treatment options, according to a statement from the office of Jason Luan, the associate minister for Mental Health and Addictions. The government expects to wrap up the transition by the end of March, 2021, the statement said.

The statement from Mr. Luan’s office did not address the lawsuit.

Nanda & Co., a law firm with offices in Edmonton and Vancouver, is leading the iOAT group’s case. The challenge over access to prescribed and injectable opioids is similar to one that played out years ago in British Columbia, which was related to prescribed and injectable diacetylmorphine, better known as heroin. The B.C. Supreme Court sided with patients and doctors, finding the injectable treatment program reduces the risks associated with severe heroin addiction and allowed it to continue.

Ms. Ervin, like her fellow plaintiffs, believes that if she no longer has access to iOAT, she will return to street drugs. These substances, she noted, are not as safe. She believes she will likely lose her housing. On the streets, she said, she will likely be raped, exploited, harassed and assaulted.

“I will likely die on the street,” she said. “There is no future for me without iOAT.” 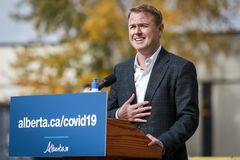 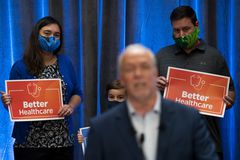