Alberta Premier Jason Kenney’s political push to have Indigenous communities play a bigger role in energy development has its first real-world example. The province announced Wednesday it will provide a loan guarantee for a First Nations investment in a natural gas-fired generating facility it says will someday produce 8 per cent of the province’s average electricity demand, and further reduce the province’s reliance on coal.

The exact size of the First Nation investment is not being disclosed, but it gives the Indigenous Communities Syndicate LP a meaningful minority stake in the $1.5-billion Cascade Power Plant project, to be built near the town of Edson, Alta., on an old forestry site. The investment is the first to be backed by the Alberta Indigenous Opportunities Corp. (AIOC), a Crown corporation created by the provincial government in January. The corporation, which will provide $93-million in loan guarantees for this project, was set up to provide technical and financial support for Indigenous communities to invest in energy projects, including oil and gas but also also power generation and renewables.

The Indigenous Communities Syndicate is owned by the Enoch Cree Nation, Alexis Nakota Sioux Nation, Kehewin Cree Nation, O’Chiese First Nation, Paul First Nation and Whitefish Lake First Nation. The syndicate’s stake in the 900 MW plant will provide hundreds of millions of dollars in cash flow to the six First Nations communities over the next three decades and beyond, according to Paul Poscente, chief executive of Backwoods Energy Services, the Indigenous-owned company that played a major role in crafting the final deal.

“Ultimately, this is not about just revenue and business. This is about that reinvestment in the community,” said Enoch Cree Nation Chief Billy Morin, who is also Treaty Six Grand Chief.

Alberta Indigenous communities are more likely to be economically dependent on, or at least familiar with, new energy sector development compared with other parts of the country. The oil downturn has hit many of them hard.

Mr. Kenney has long said he believes some of the tension around major energy projects, including the Trans Mountain expansion, could be solved with significant Indigenous investment. His United Conservative Party government has been steadfast in its support of the oil and gas industry, despite opposition to an expansion of the sector from some Indigenous leaders who have environmental concerns about new projects. The Alberta government has also set aside millions to help Indigenous groups use the courts to support oil pipelines and other resource projects.

The Premier said be believes the full participation of Indigenous people in the economy should be the ultimate goal of reconciliation. “What we’re witnessing is the long overdue Indigenous liberation from unemployment and poverty, which must be the moral cause of our time.”

The First Nations syndicate’s stake comes through the OPSEU Pension Trust. Better known as known as OPTrust, the pension plan for Ontario provincial government employees owns the Cascade Power Plant project alongside Axium Infrastructure and DIF Capital Partners. Cascade is being developed and will be operated by Kineticor Resource Corp.

“It’s a pretty exciting blueprint or template that could be used for other deals," said Simon Moody, director of private markets at OPTrust, who added the deal will create value both for the Alberta First Nations and its pension members.

Alberta NDP Leader Rachel Notley said while the investment in Cascade is good news, the parameters for First Nations qualifying for loans through the AIOC and the scope of projects considered by the government-created corporation, with a strong focus on resource development, is too limited.

“True economic reconciliation would ensure greater self-determination by Indigenous groups of the types of projects they would like to support as they move forward.”

The Cascade plant is set to be running by the fall of 2023. Mr. Kenney also said the plant will create construction and operational jobs, including for Indigenous workers, and is a point of optimism for Alberta’s struggling economy, which has been hit harder than most other provinces by the pandemic shutdown because of its reliance on oil prices.

He added the natural gas to fuel the plant will come from gas fields in northwestern Alberta. 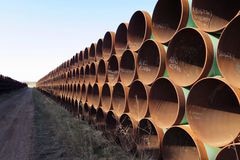