A program providing $25-a-day daycare to hundreds of children Alberta could be ending in early 2021 as the province’s new government says it needs to see data from the pilot before committing more money.

Rebecca Schulz, Alberta’s Minister of Children’s Services, said Premier Jason Kenney’s United Conservatives are looking at whether the millions spent on the program provide good value at a time when the province is grappling with a deep deficit. She’s also considering whether the program respects the choices of parents who might be looking for support, but not at a government-funded daycare.

“We were elected on a platform to be responsible for taxpayer dollars, but I also understand that parents need access to childcare to take part in the work force,” Ms. Schulz said in an interview with The Globe and Mail Tuesday. She said the data from the three-year pilot program will be reviewed to see whether funding should continue.

“We need to make sure we are ultimately supporting the parents who need help most. We also need to respect that parents have different child care scenarios,” the minister added.

She did not say how else the government might support parents. The federal Conservatives under former prime minister Stephen Harper began sending parents cheques in the mid-2000s to help cover the cost of child care, but kept the government out of the direct business of funding daycares. The childcare benefits program has only expanded under Prime Minister Justin Trudeau.

Alberta’s New Democrats created the pilot program at 122 daycares in 2017, after a promise during the 2015 campaign to fund $25-a-day child care provincewide. An oil price crash, which started that year and from which the province has yet to recover, led to a collapse in government revenues and scaled back ambitions from lawmakers in Edmonton.

New Democrat Rakhi Pancholi said the government’s decision not to fund the pilot project past 2021 is already creating uncertainty for parents of children in the centres. A childcare centre in Camrose that is part of the pilot has already sent a letter to parents warning them that it doesn’t expect the $25-a-day program to continue.

“This government continues to create chaos and uncertainty for Albertans by failing to commit to the continuation of the $25-a-day childcare program,” Ms. Pancholi said.

She said the pilot program has allowed 1,400 parents to return to work by dropping the cost of daycare. According to the Canadian Centre for Policy Alternatives, Calgarians pay $1,100 a month on average for daycare, the third highest amount among Canada’s major cities. Toronto is the most expensive at $1,685 a month, followed by Vancouver at $1,400 a month. A parent with a $25-a-day spot is paying about $500 a month.

“None of the daycares have received any indication it will continue past the end of their term … No information means the programs will end when they are scheduled to end,” added Ms. Pancholi.

Whether Mr. Kenney’s government decides to continue funding daycares past 2021, any expansion of the system seems unlikely said Ms. Schulz. “The NDP made a $1-billion campaign promise with no way to pay for it. Expanding the program would double the budget of children services, which isn’t something that can be sustained.”

The federal government funds 100 of the daycares under an agreement expiring in early 2021. Ms. Schulz said Alberta will start negotiations with Ottawa later this year to see whether federal cash could continue to flow after 2021, even in the absence of a provincial commitment. 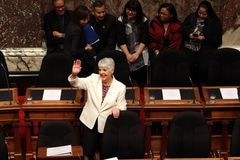 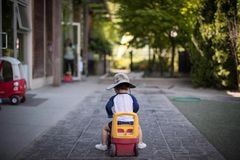