Come the first day of classes, students enrolled in Medicine Hat’s public schools will have to wear masks, while those in the city’s Catholic schools can make their own call.

This divergence comes as the coronavirus grips Medicine Hat, a city of about 62,000 people in southeast Alberta. COVID-19 is rebounding across the province, and Medicine Hat has the second-highest rate of active infections per capita in Alberta, behind the Banff region. Medicine Hat’s vaccination rate is below the provincial average, and the regional hospital is in the midst of a COVID-19 outbreak.

The Alberta government said earlier this month that masks and other public-health measures will not be mandatory in schools this year. However, the province said local school boards were free to implement their own measures to contain the coronavirus. As a result, a patchwork of policies is emerging across Alberta, with rules varying by school division, rather than by the status of the pandemic in any given area. Local education officials are now making health policies without having the same access to expertise and data as provincial politicians and bureaucrats.

The fourth wave is here – what does this mean for kids heading back to school?

“It was a little bit horrifying to know that for a year and a half, we’ve been told to follow the science,” but now health officials are not the ones making decisions around masks or physical distancing, said Catherine Wilson, chair of the Medicine Hat Public Board of Education.

Meanwhile, Ontario will require students in Grades 1 to 12 to wear masks indoors, while Quebec said pupils in Grade 5 and over must sport face coverings.

Alberta’s government argued local officials know what is best for their communities. Ms. Wilson believes the province is better equipped to synthesize the science and capable of adjusting the guidelines for certain areas if the data demands it. Premier Jason Kenney and the governing United Conservative Party effectively bounced the file to school boards to shield themselves from the political consequences, Ms. Wilson said.

Education Minister Adriana LaGrange, in a press conference earlier this month, said students must wear masks on school buses until at least Sept. 27. School boards, she said, have the “ability and the corresponding accountability” to extend public-health measures beyond the province’s baseline, including those around masks, cohorts and distancing.

“At this stage of the pandemic, we believe such measures are best left to local authorities to decide for themselves,” Ms. LaGrange said. Last year, the provincial government implemented a mask mandate for students in Grades 4 to 12. Her office said she was not available for an interview Friday.

Mr. Kenney has struggled to quell caucus dissent over restrictions and expelled two of his most outspoken critics, including Drew Barnes, the MLA who represents Cypress-Medicine Hat. He believed Mr. Kenney, who lifted nearly all public-health restrictions on Canada Day, was too heavy-handed during the province’s prior response to the pandemic.

In Medicine Hat, 71.7 per cent of residents 12 and over have at least one shot of the vaccine, compared to 77.2 per cent across Alberta. Meanwhile, 523 people in Medicine Hat have COVID-19, the equivalent of 767.8 cases per 100,000 people. Medicine Hat Public Board of Education will ease its masking requirements when active cases in the area dip below 50 per 100,000 people. The board selected this as the trigger because it was the same threshold Alberta implemented in May, when it imposed regional restrictions based on case counts.

Alberta counted 6,709 cases as of Thursday, including 749 new infections. This rising trend, public outcry and the most recent wave of hospital admissions in the United States forced the province earlier this month to delay plans to wind down access to COVID-19 testing and end isolation requirements for positive cases.

Jonathan Sharek is a teacher in Edmonton and has a child going into Grade 6 who is too young to be vaccinated. He agreed that local school boards should be involved in tailoring decisions to suit their needs, but feels “abandoned by provincial leadership” when it comes to public-health measures in the classroom.

The provincial government’s desire to distance itself from restrictions could hamper its ambitions of a return to normal, given the hodgepodge of school rules, Mr. Sharek said.

“As an aggregate, it paints a very confusing picture about how people are supposed to get back to normal.”

For example, students in Grades 4-12 in Edmonton Catholic Schools will have to wear masks in common areas, while Edmonton Public Schools will require masks for pre-kindergarten to Grade 12. In nearby Elk Island Public Schools, kids in kindergarten to Grade 6 will have to mask. Meanwhile, those in Grades 7-12 will not be required to wear masks if the full immunization rate in their community is greater than 70 per cent, the Elk Island board said this week. However, if the rate of immunization between the ages of 12 and 19 is less than 70 per cent, masks will be mandatory for all grades.

Calgary Catholic School District and the Calgary Board of Education will require masks in all grades. Lethbridge’s Holy Spirit Catholic School Division, in a document updated this week, recommended masks but said it is powerless to enforce them. “In the absence of legislation and associated health orders, we are unable to mandate the use of masks in our division,” the document said. 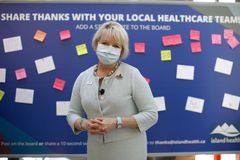