Alberta’s justice minister has given the scandal-scarred Lethbridge Police Service until April 16 to serve up an action plan to fix its problems or face being disbanded.

“We cannot wait,” Mr. Madu told reporters at the legislature, two days after sending the letter to the police service demanding the action plan.

“When there are serious problems that are right there before us, we don’t need to take months and years to deal with those issues.”

Lethbridge is Alberta’s third largest city, with a population of more than 100,000.

Mr. Madu said the plan must address everything from recruiting to oversight, must have benchmarks and timelines and be communicated to the public.

If not, Mr. Madu said he has advised the force he will take action that could include disbanding it.

Mr. Madu said disbanding it is an extreme measure, but added that police powers must be balanced by responsibility and have the confidence of the public.

“If I need to intervene to set aside the entire police service, I will,” Mr. Madu said.

The Lethbridge police said in a news release it is on board with Mr. Madu’s plan and has already been working on reforms. The police service said it will likely have a plan to him sooner than the April 16 deadline.

“We have been developing an action plan over the past several months to address the problems raised by these troubling past cases,” said the release.

“We are confident that the service is on the right path to correcting past behaviours and restoring public trust.”

The Lethbridge Police Service has been the focus of numerous controversies, both past and ongoing in recent years.

Last year, two officers were temporarily demoted after a review determined NDP provincial legislature member Shannon Phillips, while environment minister in 2017, was surveilled and photographed at a diner. The officers involved were concerned about changes Ms. Phillips was making regarding off-highway vehicle use at a nearby wilderness areas.

Ms. Phillips has called the punishment too lenient and has won the right to appeal that decision.

Separately, five officers and one civilian are now being investigated for allegations of conducting improper database searches on Ms. Phillips while she was in cabinet in 2018.

Ms. Phillips said she has also found documents showing she might have been the target of a drugged drink at a bar in 2016, but that police never told her.

Last week, five Lethbridge police employees were suspended with pay as part of an investigation into the circulation of inappropriate images, reportedly including pictures of senior police staff pasted onto the bodies of characters from the animated “Toy Story” movies.

Last year, the force was criticized for the violent takedown of a citizen wearing a Star Wars stormtrooper costume and brandishing a toy laser blaster.

The year before that, images went viral of a Lethbridge officer euthanizing a deer by running over the wailing animal numerous times with a police truck. 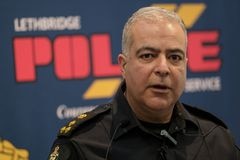 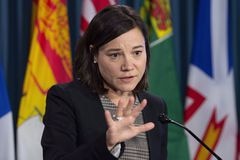