Official Opposition Leader Andrew Scheer donned an obligatory cowboy hat as he flipped pancakes on opening weekend of the Calgary Stampede, receiving a warm reception in reliable Conservative territory where he is seeking to pick up the few remaining seats his party doesn’t hold.

Mr. Scheer visited the grounds of the Stampede – the city’s iconic mix of rodeo, midway rides and cowboy culture – where he served up a few pancakes at the popular family-day breakfast on Sunday before posing for photos and shaking hands with supporters. A day earlier, he attended several events in the only two Calgary ridings the Conservatives don’t currently hold in the House of Commons before a barbecue fundraiser hosted by one of his MPs.

While he generally had a welcoming response, he encountered some onlookers who weren’t quite sure who he was – a problem the Conservatives have been trying to address through a combination of ads and public appearances to boost their leader’s profile ahead of the federal election this fall.

Mr. Scheer said he came to the Stampede to continue pressing his message that the Conservatives would be far better for Alberta, and the province’s energy sector, than Prime Minister Justin Trudeau’s Liberals.

"“The message is that we don't take anything for granted," Mr. Scheer told reporters after a stop at the city’s largest free Stampede breakfast at the Chinook Centre mall on Saturday.

“We know that every election we have to regain the trust of voters here.”

The Stampede has become a must-attend event for political leaders. Mr. Trudeau is expected to be in Calgary later this week, though his office has not released an itinerary; the Liberal Party website lists a Stampede-themed fundraiser featuring the Prime Minister next weekend.

Green Party Leader Elizabeth May and People’s Party Leader Maxime Bernier were also in town on the weekend, while NDP Leader Jagmeet Singh is skipping the Stampede.

Mr. Scheer spent much of his time in the ridings of Calgary Centre, held by Liberal Kent Hehr, and Calgary Skyview, where MP Darshan Kang sits as an Independent after leaving the Liberal caucus last year following sexual misconduct allegations, which he denied.

On Saturday evening, Mr. Scheer attended a barbecue at Calgary’s Heritage Park, where he was introduced by Alberta Premier Jason Kenney before delivering a speech that accused Mr. Trudeau of kicking Albertans when they are down. He said a Conservative government would act quickly to revive stalled energy projects and promote Alberta’s energy industry.

Maria Muszynski, who posed for a photo at the Chinook Centre breakfast, said she was delighted to stumble upon Mr. Scheer.

“I think he’s a great guy, he’s very confident,” she said. “I think he’ll be an ally for Alberta; I think he can work with Jason Kenney. They’re on the same page.”

Kumar Nadimpalli also posed for a photo, but later confessed that he thought he’d been standing next to Mr. Kenney. Nonetheless, he said he believes the Conservatives are the best choice for Alberta.

“That’s when Alberta will get its due. It’s been neglected,” added the 35-year-old who became a citizen this past spring and will vote in his first federal election this fall.

Duane Bratt, a Mount Royal University political science professor, says conservative leaders are expected to make a substantial appearance during the Stampede, which he said is an important opportunity for Mr. Scheer to continue building his profile.

“Scheer represents a Regina riding and yet is not very well-known in Western Canada,” Dr. Bratt said in an interview.

“Part of that is when he was an MP, he was the Speaker and Speakers don’t have visibility outside the Ottawa bubble.”

He added that while the Conservatives can comfortably rely on votes in Alberta, that also makes the province crucial for party fundraising. 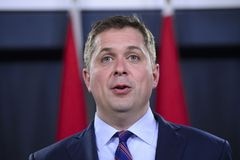