Residents of High Level, Alta., were ordered to evacuate their homes on Monday as the largest of several wildfires in the province bore down on the small northern community.

The out-of-control fire in the northwestern corner of Alberta expanded through the long weekend to cover 690 square kilometres, blocking two highways and burning as close as three kilometres to High Level, a town of about 3,100 people.

By late Monday, provincial officials made the decision to evacuate the town and surrounding areas, including the Bushe River First Nation reserve, an order that affects about 4,750 people in total.

Residents were told to prepare to be away for at least 72 hours, with high winds and dry conditions keeping the fire danger at an extreme level.

“People are, of course, afraid, because they remember the wildfires of Fort McMurray,” Crystal McAteer, High Level’s mayor, told reporters. “But we talked to a lot of the residents and reaffirmed that we were being pro-active. I’m very optimistic with the resources that we’ve got here, the good intelligence that we’re getting and our fire chief, who has been excellent with his crew.”

Residents from the town, which is about 740 kilometres northwest of Edmonton, are being told to register at reception centres in High Prairie and Slave Lake, Alta.

Earlier, the fire knocked out electricity to High Level and First Nation communities in the region, and crews with ATCO Electric had been working to restore power.

Scott Elliot, incident commander for Alberta Wildfire, said the dry and gusty conditions were ideal for the rapid expansion of the blaze.

“We’ve been responding to this fire for several days now. The extreme conditions are really difficult to work in. These factors have limited our ability to access the fire in any sort of real meaningful way,” Mr. Elliot said.

Officials said the fire was moving in a northwesterly direction and should spare the town, but the evacuation was ordered as a precaution.

The province has deployed 64 firefighters and six helicopters as well as water bombers and bulldozers to battle the blaze, one of six listed as out of control in northern and central Alberta, said Derek Gagnon, public-information officer with Alberta Wildfire.

Weather conditions in the region are forecast to remain dry, warm and breezy for most of the next week, according to Environment Canada, keeping the danger level high. The province has instituted bans on campfires and recreational off-road vehicle use.

On Sunday, residents of the hamlet of Marlboro – west of the Central Alberta town of Edson – were evacuated due to an approaching fire, and the Yellowhead Highway was closed to traffic. Early Monday, the highway reopened and the residents were allowed to return home, but were warned that they may need to flee again if the risk level rises.

Albert Bahri, director of protective services in Yellowhead County, said the fire had come within 900 metres of homes in the area. Bulldozers pushed away vegetation and aircraft dumped water on the fire, which was about one square kilometre in area but still listed as out of control.

Alberta’s wildfire activity has been about average, with fewer fires than during last year’s May long weekend but more area burned, Mr. Gagnon said. One of the worst years was 2016, when a massive blaze that became known as “the Beast” roared into Fort McMurray, burning entire neighbourhoods in one of Canada’s costliest disasters. 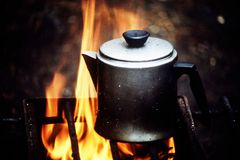 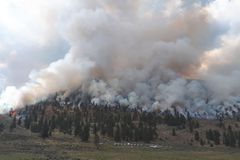