As the former executive chef and co-owner of Tres Carnales and Rostizado, two of Edmonton’s most well-known restaurants, Edgar Gutierrez has spent a significant portion of his career understanding and uplifting Mexican cuisine. Things changed for the Philippines-born restaurateur in May of 2018, when he opened Kanto 98 St. Eatery, a contemporary celebration of his heritage.

Kanto is just one of many examples across Canada of an eatery born of a chef’s desire to share their Asian heritage and introduce diners to dishes and food styles they’re unfamiliar with. Asian flavours can be found on most contemporary restaurant menus these days, but recipes with family roots will always offer more depth.

Mr. Gutierrez explains that his rediscovering of Filipino food culture began while he was taking Filipino martial arts classes. Learning about this type of athletics led him to ask himself why he wasn’t cooking dishes in line with his family’s history.

“It’s not that I ever forgot about my Filipino culture, but I just wasn’t as in tune with it before taking those classes,” he says.

Filipino food is not nearly as prevalent in the Canadian restaurant scene as other Southeast Asian cuisines such as Thai or Vietnamese. But the growing trend of contemporary Filipino food in the past five years in the United States, as well as fast-food chain Jollibee’s many buzzworthy openings in Canada, have helped with awareness.

“When I first opened, I thought I would have a problem with people being unfamiliar with Filipino food, so I offered things that were easy to accept like baos and barbecued meat skewers,” Mr. Gutierrez says. “Not everyone is experimental with food, so I had to start off serving food that satisfied that itch for comfort food.”

Since opening three years ago, he has continued to widen the breadth of the reimagined Filipino dishes he serves. Palabok, a ramen noodle-based dish with pork, shrimp sauce, chicharron and nori, is an ode to his mother and her sisters.

“I took a little bit of everything from each of them. That’s how I’ve designed a lot of this menu, just taking a little of inspiration from someone in my family.”

Sisig is something the chef describes as a “newer Filipino classic” and a comfort food that is synonymous with his generation. It has become one of his most popular items.

The dish is typically made with pig’s head boiled in a simple mix of water and aromatics and then served in a hot skillet. Mr. Gutierrez’s version utilizes the residual soy and pineapple braising liquid he uses for other meat dishes. He also swaps out the traditional raw egg served on top for a fried egg, making it easier to transport.

“People love it, especially Filipino people,” he says. “This is normally a dish that you would not be able to order to-go.” It is “recognizable to Filipinos, but tastes like something new.”

In Winnipeg, Randy Khounnoraj draws inspiration from a myriad of Southeast Asian cultures for his menus, but feels most connected to dishes that draw from his Laotian roots. The chef, who opened Khao House with his partner, Korene McCaig, in August, 2016, says serving the cuisine he grew up with is important to him, because of how unfamiliar it is to so many people.

“For the most part [Laotian culture] is invisible. We have introduced some customers to the cuisine and some of the dishes have become a part of their vocabulary like khao, naem khao and kalapao, which to me, is mind-blowing,” Mr. Khounnoraj says.

The chef consulted with his mother and her friends on how to prepare Laotian dishes as authentically as possible, though he adds his own interpretations. He shies away from describing his take as “truly authentic,” seeing as he is in Canada and access to fresh ingredients and Laotian pantry staples is not the same.

Over the five years Khao House has been open, the restaurant has become a conduit of his cultural pride.

“In the beginning, I actually wanted to present the food I grew up eating more than the food [of my family heritage]. As time passed, I cooked more and more Laos food and became more attached and conscious of my Laos identity,” Mr. Khounnoraj says. “Today, I am more educated and proud to represent the food of Laos, while making my own imprint of Laos cuisine in Winnipeg.”

Chef Nuit Regular, on the other hand, strives for authenticity at her restaurant Kiin in Toronto. There and at Pai – both co-owned with her husband, Jeff – she showcases the diversity of Thai cooking. While Pai focuses on food from the northern part of the country, Kiin sets its sights on Royal Thai cuisine, a complex cuisine that is rare to find served in North America.

“[It involves] high-quality ingredients, time-consuming preparation and beautiful, intricate plating ... It is a very labour-intensive and time-consuming art form,” Ms. Regular says. “As you can imagine, this type of cuisine requires many years of training and not everyone wants to or is able to spend all this time learning Royal Thai cuisine.”

That’s part of the reason why Kiin commands the attention it does, as few Canadians have ever seen Thai food presented this vibrantly and detailed. Having dined there myself many times, I can attest that it is truly an electric experience.

The Thailand-born chef strongly believes it’s important that she and her husband help share the heritage behind the dishes she serves. “I’m incredibly honoured that the government of Thailand has recognized the authenticity of my Thai cuisine at both Kiin and Pai with the prestigious Thai Select [accrediation],” Ms. Regular says.

But for her it’s about more than recognition. “I have a real passion for sharing this aspect of my culture, history and culinary uniqueness to Canadian diners,” she says. Alberta restaurants have banded together to weather COVID-19 shutdowns
April 19, 2021 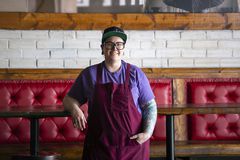