Banff, Alta., has made masks mandatory along its busiest street and in indoor public spaces beginning this Friday, a move the town says makes it the only municipality in Canada to require face coverings in an outdoor space.

Provincial governments have been reluctant to mandate mask-wearing as COVID-19 outbreaks spike again in the Prairies and elsewhere in Canada, but cities and towns have been stepping in with their own rules.

As tourists slowly return to the core of Canada’s most visited national park, its town council went further, voting earlier this week to require masks not just in enclosed public spaces, but also outside along Banff Avenue, a normally busy main strip that is lined with stores and cafés. Two blocks have been closed off to vehicles since June to allow more space for pedestrians to physically distance.

Enforcing masks may seem impossible, but that was said about anti-smoking bylaws, too

“It’s madness in downtown Banff,” said Karen Minish, a Banff resident of 30 years who petitioned the town to introduce the bylaw. “It’s particularly crowded and some people are wearing masks, but there are families taking up the whole sidewalk not wearing masks and you don’t see any social distancing.”

Alberta Premier Jason Kenney left the decision up to municipalities to determine whether residents and visitors should be required to wear personal protective equipment in certain areas, saying local governments are better suited to assess their needs based on case numbers and the ability to physically distance.

Calgary City Council voted last week to require masks in public indoor spaces as of this weekend, and Edmonton, which already requires masks in city-owned facilities and on public transit, plans to debate stricter measures this week. The town council in Canmore, located an hour’s drive west of Calgary, just outside Banff National Park, plans to discuss a similar bylaw next week.

COVID-19 cases in Banff have been relatively low, but are rising. The town had eight active cases last Friday, the highest since the pandemic began, according to Banff Mayor Karen Sorensen. Lineups for popular restaurants and stores and large groups of people strolling along the avenue are causing clusters in the town’s core.

“We got overwhelming comments from residents and businesses saying please get this bylaw in place and do it as quickly as you possible can,” she said.

Ms. Sorensen said a provincewide measure would make things easier on municipalities, as well as visitors, who now have to keep track of different rules in every park or community they go to.

Alberta Health Services caps outdoor gatherings at 100 to 200 people, depending on the type of event, but many people are unaware that this guideline assumes that crowds are wearing masks and keeping two metres apart on all sides, according to Amy Tan, a Calgary physician who discussed mask-wearing with the town council on Monday.

Some asymptomatic people are transmitting the disease, and studies have shown that community spread could be contained if 80 per cent of the population wore a mask, she said. In a high-traffic areas with limited space for physical distancing, such as Banff’s main strip, the risk spikes.

“While outdoor is much safer than indoor, if you have crowds of people who are not able to physically distance by two metres, and they’re talking closely and laughing, then there is still risk,” Dr. Tan said. “Masking would help to mitigate that risk by adding another level of protection.”

The bylaw, which comes with a $150 fine for individuals who fail to comply and businesses who do not post a sign, allows some exceptions, including children under two years old and people with medical conditions that make it unsafe to wear a mask.

While most small businesses support the bylaw and some are already requiring people to wear masks, some are concerned they will carry the burden of providing personal protective equipment for customers at a time when they are already operating at reduced capacity and making less money.

To make more masks available, the province provided the town with 100,000 of them to hand out to visitors free. But the town is also asking businesses to offer hand sanitizer for customers.

“If this is going to become more of the norm in the province, we might have to look at an extension of Alberta’s program that would allow businesses to acquire masks not just for staff and employees, but also have some on hand for customers,” said Annie Dormuth, Alberta provincial affairs director at the Canadian Federation of Independent Business.

Saskatchewan premier says no decision has been made on mandatory masks
July 27, 2020 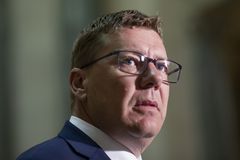 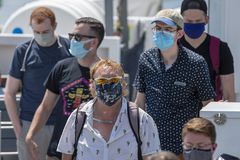 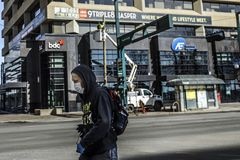