A dozen Indigenous relics dating from the signing of Treaty 7, confined to a British museum for more than 140 years, are coming home to Alberta.

The regalia belongs to Blackfoot leader Chief Crowfoot, who is buried on the grounds of the Blackfoot Crossing Historical Park on the Siksika First Nation, east of Calgary. As his items whiled away the years at the Royal Albert Memorial Museum (RAMM) in Exeter, 280 kilometres southwest of London, a purpose-built $100,000 room that carefully controls light, temperature and humidity sat empty at Blackfoot Crossing.

But after quiet political pressure from Alberta late last year, first reported by The Globe and Mail, Exeter City Council voted Tuesday to return the items to the Siksika First Nation.

“For us, symbolically, it’s Crowfoot coming home,” he told The Globe. “It will be like things coming full circle, and feeling complete and whole again. For these things to be returned – and not just taken care of according to museum practices, but also to our long-standing cultural protocols – well, I’m speechless.”

The collection consists of a dozen items belonging to the influential Blackfoot leader, including his cream-hued buckskin shirt and leggings adorned with red feathers and fringing, and his smooth hardwood bow and iron-tipped arrow with case and quiver, the straps intricate with beaded blue, pink and yellow flowers. There’s also a bundle of feathers; beaded pouches; a deer-hide necklace strung with grizzly bear claws, beads, animal teeth and brass studs (worn by warriors as “a symbol of courage and status,” according to the museum); and a Sheffield steel hunting knife lashed with the front part of a bear’s jaw.

Negotiations to return the items to Canada began around 2010 and, in 2013, Blackfoot representatives flew to Britain to see the relics. RAMM staff visited the historical park and Blackfoot nations in Alberta in 2014, but then negotiations sputtered to a standstill.

Last year, Mr. Yellow Old Woman told The Globe he was frustrated with the delay and said he felt “extreme resistance” from RAMM to send Chief Crowfoot’s belongings home.

The change in heart from the museum comes six months after Alberta Premier Jason Kenney visited Blackfoot Crossing and heard about the stalled negotiations.

Afterward, Mr. Kenney penned letters to five English officials. He urged movement on the repatriation of items that once belonged to Crowfoot, who signed Treaty 7 – an agreement between the federal government and seven First Nations in southern Alberta – on Sept. 22, 1877.

“Doing so,” Mr. Kenney wrote in each letter, “would be regarded as a great act of reconciliation with Canada’s Indigenous people.”

Exeter City Councillor Rachel Sutton, who supported the items’ return, said in a statement that original injustices of colonization still reverberate with First Nations people today. “Giving back Crowfoot’s regalia returns control to the Siksika Nation over their cultural identity, dignity and authority, and is the right thing to do,” she said.

The next step is a visit to Exeter by Siksika First Nation chief Ouray Crowfoot, a direct descendant of Crowfoot, and an official ceremony to hand over the regalia. That will happen once COVID-19 travel restrictions have lifted.

Mr. Yellow Old Woman said it was important for someone of good spiritual standing and respect in the community to retrieve the items, “to ensure all things come back with it – not just the tangible, but the intangible, too.”

Once back in Canada, the Siksika Nation will lend the regalia to Blackfoot Crossing, which will act as an official caretaker.

“Once this is over," Mr. Yellow Old Woman said, “we’ll have a celebration amongst our people.” 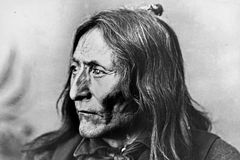