In the past decade, a simple combination of permanent markers, paper and watercolour paints (a healthy dose of creative genius) helped catapult Calgary-based artist Mandy Stobo.

Ms. Stobo’s Bad Portraits series first gained traction on Twitter back in 2011 with low-fi portraits of celebrities and other users on the social-media platform. With a boost from comedian Andy Samberg, she quickly turned her free quirky portraits into a business, with commissioned pieces fetching anywhere from $20 to $100.

Now, Ms. Stobo has been combining her decidedly low-tech portraits with augmented reality, with a recent series that featured celebrity drag performers from the RuPaul’s Drag Race series. We AR All Queens was on display at a recent RuPaul’s Drag Race event in Calgary.

On their own, the portraits of Drag Race stars such as Bob The Drag Queen, Trixie Mattel or Sasha Velour look like any of her Bad Portraits. But when a viewer holds up a tablet running a special camera app, the pieces come alive, with the subjects moving and blinking, while the background surprises with bursts of colours, and animations such as curtains drawing, or flowers blooming.

“My entire idea around incorporating something like VR or AR into my artwork was that moment in Mary Poppins where she jumps into the chalk drawing on the sidewalk and the world she’s in comes alive," Ms. Stobo said.

“The AR component allows a moment with the viewer, if they happen to be uncomfortable, to feel what they’re feeling and maybe change their perspective. Who knows if that will happen, but I hope that it does.”

Ms. Stobo said it took nine months to get it to work.

“I haven’t seen a lot of artists that are creating their own artwork and AR together. I also teach a lot now across the country and the engagement with youth is huge to me. When they see technology interact with an art piece, it changes everything.”

Ms. Stobo said her own experiences made her admire the vulnerability of her drag queen subjects.

“Being a drag queen is such an extreme and brave choice, but also very vulnerable,” Ms. Stobo said.

Once the collection wraps up at the Central Library, the series will head to the Toronto Harbourfront Centre in 2020. Ms. Stobo will also be heading to Toronto next month with another AR portrait series created specifically for Canada’s Walk of Fame and its new crop of inductees.

The AR component for this series will be digitally animated career retrospectives for inductees such as hockey player Mark Messier and Hollywood A-lister Will Arnett.

Ms. Stobo previously created thousands of pieces for her Bad Portrait series, including live portrait painting during concerts, custom commissions for companies such as Rosso Coffee Roasters, Home and Away and much more. Celebrated musician Jann Arden contracted Ms. Stobo to do the album artwork for her 2014 Everything Almost.

"I was a single mom, I didn’t have any money. I was struggling. I also didn’t understand how Kelly Oxford was making a living on Twitter,” said Ms. Stobo. “I’d ask myself: ‘How does this work?’ So, I began taking avatars from different Twitter users that I thought seemed like genuine people and do their portraits.” 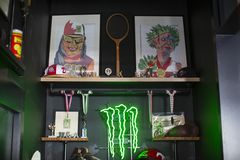