For academics Judit Smits and Albert Vandenberg, a married couple in unrelated areas of study, a friendly chat about work several years ago might just have led to life-saving consequences whose effects are being seen now.

A decade later, the couple is part of a Canadian team of researchers who are using Saskatchewan-grown lentils to help combat arsenic poisoning in humans.

“Whoever could have imagined that somebody interested in animal health and veterinary medicine would have ever had an academic overlap with their partner, who was a plant breeder? That was just really incongruous,” Dr. Smits said.

At least 140 million people in 50 countries have been exposed to high levels of arsenic in their drinking water, according to the World Health Organization. The arsenic originates in contaminated groundwater and, when consumed by people, is linked to cancer, loss of extremities including fingers and toes, dark patches on the skin and a suppressed immune system.

Dr. Smits’s groundbreaking research into a potential treatment for arsenic poisoning began during a drought in Western Canada. High concentrations of selenium occur in certain plants, which the animals had begun eating, resulting in selenium poisoning. The animals were treated with safe forms of arsenic, because the chemical element binds with selenium in the blood, creating a large molecule that doesn’t get absorbed by tissue and is flushed out of the animal’s body through its urine.

Dr. Smits wondered if the detoxification method could be reversed by treating arsenic poisoning with selenium.

That’s where Dr. Smits and Dr. Vandenberg’s worlds collided. The lentils Dr. Vandenberg was studying in Saskatchewan were rich in selenium, which is abundant in the soil. Dr. Smits hired Regina Krohn, a post-doctoral fellow, to oversee a study that fed selenium-rich lentils to lab mice exposed to high levels of arsenic.

The study found that the selenium-enriched lentils helped decrease the amount of plaque in the mice’s arteries, which had built up as a result of the arsenic exposure. With the animal tests demonstrating positive results, the team launched a clinical trial with humans.

Bangladesh was an obvious location for the trial, as the WHO had deemed the country’s arsenic crisis the “largest mass poisoning of a population in history.” In 2012, it was estimated that 39 million Bangladeshis were exposed to high levels of arsenic in their drinking water, according to statistics published by the WHO.

Bangladesh was also a good fit for cultural reasons, as people commonly eat lentils there.

“Everybody in Bangladesh will eat a bowl of lentil soup. You don’t have to ask twice,” Dr. Vandenberg said.

From 2015 to 2016, with $1-million in funding from a variety of donors, the research team conducted a clinical trial in which they provided 400 Bangladeshis with Saskatchewan-grown, selenium-rich lentils to eat.

The trial found that participants had an increased body mass index and lower incidences of asthma and allergies after eating the selenium-rich lentils. However, the research team reached a breakthrough moment when samples showed higher levels of arsenic in participants’ urine, proving the lentils were helping flush the toxin from their bodies.

“That was the most exciting and most solid evidence of this being helpful. Getting rid of [arsenic] so it doesn’t have a chance to get absorbed," Dr. Smits said.

The research team published their work in the journal Environmental Research this fall and will complete a report for their funders by next April. Although other studies have looked at the use of selenium supplements to treat arsenic poisoning, they believe they are the only researchers looking into the effectiveness of selenium-rich lentils.

Selenium pills and salts are also being used to treat arsenic poisoning, but are costly and difficult to administer, Dr. Smits said. She said she believes the lentils are the most effective and inexpensive way of combating arsenic poisoning in the developing world.

In the long-term, communities affected by arsenic poisoning need to change their water supply, but that’s easier said than done. The WHO installed a million wells with arsenic filters in Bangladesh in the 1980s, but their success was short-lived.

“They worked beautifully for about a year … and then they broke down and the people had no resources, no knowledge about how to fix them so they’re just there, doing nothing,” Dr. Smits said.

Dr. Krohn has also seen first-hand the social effects of the arsenic crisis during her trips to Bangladesh. She said people who develop the dark spots on their skin associated with arsenic poisoning are considered “cursed” and shunned from their community.

“If you show these spots on your skin, for example, women might not get married. They’re not wanted. People get fired. There’s a lot of superstition regarding those signs.”

Dr. Krohn hopes the research raises more awareness about the impact of environmental toxins on human health and how good nutrition can combat the problem. 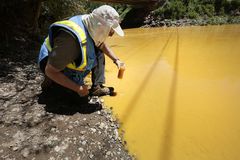 Newfoundland firm recalling Magnetic Putty due to high levels of arsenic, magnets
May 4, 2018
Study: Arsenic poisoning a risk for 50M in Pakistan
August 23, 2017