Patty McCallum and Tasha Rabbit are visiting in Galt Gardens, in downtown Lethbridge. The park covers four blocks, and dozens of people are hanging out on its trim grass and metal picnic tables. Mature trees surround the park. Pink and purple petunias are in bloom, fending off the fall, in flower beds planted with precision.

Ms. McCallum and Ms. Rabbit are spending more time in Galt Gardens these days, after Lethbridge’s supervised consumption site closed at the end of August. The facility, which hosted 13 injection booths and eight inhalation stalls, closed after Alberta accused it of financial mismanagement and pulled funding. The government, under the United Conservative Party, replaced it with a mobile unit, parked next to a shelter, that can serve three people at a time.

The fallout from this shift, for people with addictions like Ms. McCallum and Ms. Rabbit, is unfolding here, in Lethbridge’s original public square. People who used the old supervised consumption site have not fully embraced the mobile unit and are instead using illicit drugs in places like Galt Gardens. In Alberta, the death toll for opioid overdoses set a new record in April, May and June, killing twice as many people as in the three previous months. Substance users and their advocates believe the changes in Lethbridge will lead to more deaths.

“It just feels like that’s what they want,” says Ms. Rabbit, who is Indigenous. “They want us to die, you know?”

Both Ms. McCallum and Ms. Rabbit use carfentanil, a fentanyl analogue used to tranquilize large animals. They were regulars at the old supervised consumption site, where they were fed and could access counselling. ARCHES, a non-profit organization, operated the facility in a large brick building downtown. The pair would hang out there, rather than at Galt Gardens. “They just understood us,” says Ms. Rabbit. She hasn’t yet used the mobile unit, which opened Aug. 17.

Ms. McCallum tried out the mobile operation, but stopped going because its constrained capacity means people sometimes have to wait before they can consume their illicit drugs.

And that, she says, is why earlier this month, she used drugs alone in an ally near Galt Gardens, overdosed, and is only around now because a friend found her and hit her with two shots of naloxone. (The friend, a fellow drug user in Galt Gardens, confirms this.)

Alberta recorded 301 deaths tied to opioid overdoses in the second quarter – before ARCHES closed, but in the midst of the COVID-19 pandemic, which has led to reduced capacity at harm reduction facilities across the province, a more dangerous drug supply, widespread isolation and increased stress. Visits to supervised consumption and overdose prevention sites dropped 64 per cent in the second quarter compared to the one prior, when opioid overdoses killed 148 people in Alberta. British Columbia recorded similar spikes in its overdose death toll.

The opioid crisis has been especially deadly in Lethbridge, where many of the people using substances are Indigenous.

In the first half of the year, fentanyl overdoses killed 21 people in Lethbridge, whose population is roughly 93,000. This translates into a rate of 42.4 per 100,000 person years, the highest in the province, according to government data. For context, fentanyl overdoses killed six people in Lethbridge – a rate of 24.2 per 100,000 person years – in the first three months of the year, before the COVID-19 pandemic gripped Canada and capacity restrictions at harm reduction facilities were imposed.

Alberta’s mobile units are known as overdose prevention sites. The one in Lethbridge is a large white van that looks like an oversized food truck, with four metal stairs and a handrail leading to its door. It’s parked at a dead end, next to the Lethbridge Stabilization Centre and Shelter, just north of the overpass over Highway 3, which bisects the city.

ARCHES is on a main drag on the other side of the overpass, about 600 metres southeast. Galt Gardens is about 400 metres west of ARCHES. The three locations form a tidy triangle. When ARCHES was open, its neighbours complained about crime, disorder and debris downtown. The mobile unit is out of sight, in a light industrial area, but detractors remain.

Darcy Bonneau lives at Lethbridge’s shelter, which is run by Calgary’s Alpha House Society. He is sitting on the ground down the street from the mobile unit, with a pillow between his back and a chain link fence.

“I think they are just pouring gas on the fire,” he says. “To me, that’s not help. Sure, they might be saving people from ODing, but I don’t know. I don’t like it, because I bet you I’ve lost 13 or 14 friends in the last year and a half because of drugs.”

Mr. Bonneau is drinking a Keystone Light; illicit drugs aren’t his thing. It doesn’t make sense to put a van designed for drug use – but short on capacity – next to the shelter, where people go to get clean, he says. “They are ODing on the bathroom floor."

Alberta Health Services operates Lethbridge’s mobile site, but directed questions about its operations to the office of Jason Luan, Alberta’s Associate Minister for Mental Health and Addictions. His spokesperson, Kassandra Kitz, said he wasn’t available for an interview. The UCP favours recovery programs, and is reviewing the future of the province’s supervised consumption and overdose prevention sites.

An average of 34 people per day used the mobile unit in Lethbridge between Sept. 1 and Sept. 20, Ms. Kitz said in a statement. Staff reversed four overdoses with naloxone during this stretch and handled nine adverse events that required other supportive measures, she said. Staff also made 162 referrals to programs like housing and detox. The government insists the van, which costs about $3-million per year, is temporary. Unlike the original supervised consumption site, users cannot smoke drugs in the van.

ARCHES said last summer that it was getting an average of 663 visits per day, but physical distancing measures have reduced capacity at supervised consumption sites across the province. Ms. Kitz said the ARCHES facility handled 60 visits per day in the months leading up to its closure.

Mr. Luan said in a statement that opioid-related EMS responses have dropped 36 per cent in Lethbridge in September compared to the three months prior, and there has been a “modest” decrease in drug and alcohol overdose deaths.

Jeff Cove manages a program in Lethbridge called The Watch, where trained staff and volunteers patrol town. His team administered naloxone to seven people in July, 11 in August, and just two in September. This drop doesn’t necessarily mean fewer people are consuming drugs on the streets or that overdoses are dropping. More people in the community are carrying naloxone kits now that ARCHES is closed, Mr. Cove says, and that could explain, in part, why patrollers have not come across as many overdoses.

Indeed, in Galt Gardens, harm reduction advocates are handing out supplies like naloxone, clean needles and containers for used needles to Patty McCallum, Tasha Rabbit and their peers.

“It was the most used consumption site in North America," Ms. McCallum says of ARCHES. “Why would they close it?” 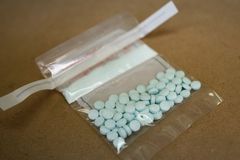